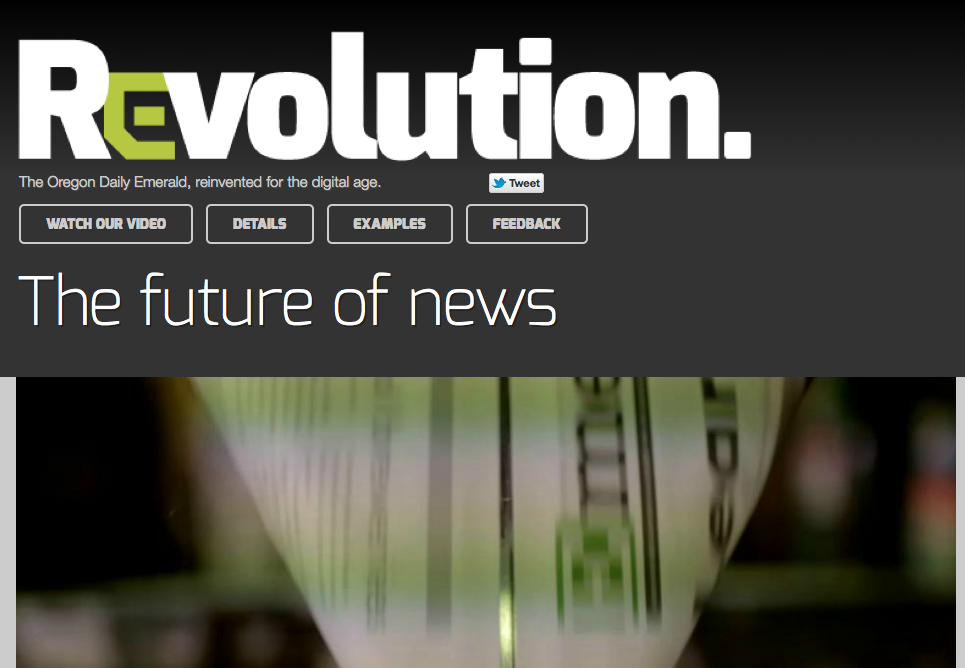 The Oregon Daily Emerald is no more. As of Wednesday, the publication has adopted a twice-a-week printing schedule and a digital-first philosophy.

We’re about to close the book on the Oregon Daily Emerald.

After 92 years, the University of Oregon’s newspaper will end its run as a Monday-to-Friday operation in June. Yes, it’s the end of an era, and we’re sad about that. But it’s also the start of a new era, the digital one.

The idea of dropping 92 years of tradition made many on the student staff nervous. Though they had literally grown up on Facebook, ink still coursed through their veins."

Next fall, we will replace our traditional newspaper with a modern college media organization, Emerald Media Group.

This isn’t about rebranding. This isn’t about ramping up revenue for our non-profit company. Sure, we face the same economic pressures as every legacy media company. But this is our best financial year since 2000, and we have no debt and a reasonable reserve fund.

This is about delivering on our mission to serve our community and prepare our student staff for the professional world. Here’s how we plan to do that:

Print: Two weekly print editions — Emerald Monday and Emerald Weekend — modeled after alternative weeklies, such as Willamette Week in Portland and The Stranger in Seattle.

I had a general sense of the challenges faced by newspapers when I started as publisher of the Oregon Daily Emerald in February 2011. I had devoted more than half my life to the industry, from teenage paperboy to Emerald editor in chief to professional news reporter.

At the Emerald, I figured that if we ramped up our journalism, students would rush to grab the paper each morning.

I soon realized our challenges were much more complex.

In the 1990s, college newspapers owned the campus audience. Advertisers had few options other than the paper to reach the coveted college demographic, and students had few other options for news and information. We printed 10,000 papers daily for about 17,000 students.

The Emerald made money most years.

But in the 2000s, the options for advertising and information multiplied with technology. The student body rose to 24,000, but our circulation fell to 6,000. The daily print production schedule consumed our days and made it difficult to grow our audience on the web and mobile platforms.

And, we lost money most years.

By the time I joined the Emerald a year ago, we had cut costs and recovered enough revenue to squeeze out small annual operating surpluses again. But looking to the future, we had two options: Convince more students to pick up the paper, or search for a new model.

We read every relevant white paper, magazine article and book we could find and consulted our peers in the college and professional media world. We paid special attention to the Red & Black at the University of Georgia as it converted last fall from a daily to a weekly newspaper, the first major college paper to do so.

Through all our research, two things stood out:

The other 93%: The Pew Research Center for the People & the Press asked Americans in 2006, 2008 and 2010 if they had read a print newspaper yesterday. Not surprisingly, the college age demographic of 18 to 24 reported the lowest readership. But the rate of decline shocked us. In those three surveys, the rate fell from 20 percent to 14 percent to 7 percent. In our presentations, the 7 percent slide almost always prompted a gasp.

The alt-weekly influence: We met face-to-face with about 100 students and laid down a few copies of the Emerald next to a few local alternative weeklies. Then we asked, “For the typical college student, which of these formats would compel them to stop at a box and grab the paper?” Students who work on our staff or in student politics tended to favor the traditional format. But the other 90 percent pointed to the alt-weekly.

The idea of dropping 92 years of tradition made many on the student staff nervous. Though they had literally grown up on Facebook, ink still coursed through their veins. They liked the tradition.

But the more we looked at the facts, the more students started to see the benefits of a major change. One ambitious sophomore reporter looked skeptical as he sat down to hear about our options. I shared the bullet points and handed him a local alt-weekly as an example. He flipped the pages and looked up with wide eyes to say: “We have to do this.”

We considered four options for our future print publication: five, three, two and one time per week. Each option included an expanded web, mobile and marketing effort for news and advertising.

At first, I loved the once-a-week approach. It’s simple and easy to explain. People know what a weekly is. But a student on our board suggested we look closer at twice a week. We debated and tweaked the concept and ended up with an approach that seemed to fit our campus. Our board agreed.

Emerald Monday: A news and sports edition with a meaty, 1,200-word cover story that dives deep into a major campus issue. The rest of the news section will be 300 to 600 news briefs and stories. The sports section will wrap up the weekend games. All of our stories will take a magazine approach to storytelling. While our online coverage focuses on the “what happened,” our print edition focuses on the “how and why.” We’re modeling this section after Newsweek, Bloomberg Businessweek and ESPN Magazine.

Emerald Thursday: An entertainment and culture edition with a thoughtful feature story that anchors the cover. This section will include the most comprehensive events calendar on campus and features on topics most relevant to students: technology, under 21 entertainment, music and sex. This section is modeled after Rolling Stone, Wired and Vanity Fair.

We’re taking a new approach to digital, too.

In the newsroom, daily is too slow. We will report in real-time on the web, mobile and social media. To do this, we made digital news its own team and set aside money to equip them with new iPads and video cameras to report live from the field.

On the business side, we created a mini-tech startup within the Emerald. We hired a professional mobile/web programmer and assigned him to combine data and technology to build apps that makes students’ lives better.

Our advertising services will grow far behind print, too. We will offer a full suite of marketing services to help our clients. Those services may or may not be tied to our news products. But all the revenue those services generate will go toward subsidizing our journalistic mission.

A Model That Fits Our Mission

We are excited about our future, but we don’t pretend we can predict it.

We will roll out these changes next fall. We know some ideas will take flight and others will flop. That’s OK. We’ve tried to adopt a culture of innovation, much like a tech startup. We’ll experiment, test, learn, revise, repeat. We’re looking for progress, not perfection.

We have a strong brand and a coveted audience of young, educated, ambitious students. We’ll figure out a model that fits our mission.