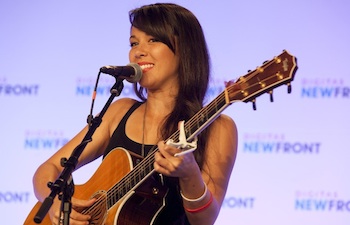 The days of skateboarding dogs holding sway on the web may be numbered. Technology companies and advertisers are professing their belief in the value of professionally produced original content.

Portals and platforms like YouTube, AOL, MSN and Yahoo — once known for aggregating and optimizing video produced by others — are spending millions of dollars to develop and acquire programming of their own.

They've got big enough audiences now, and they believe they can charge the premiums to deliver a premium audience to premium advertisers." -John McCarus

The demand is clearly there. YouTube reported 30 percent growth in views over eight months, and online video viewing rose nearly 45 percent in January over the previous year, according to Nielsen.

So, while the trend comes after previous forays into original programming, this time it may stick.

But this time the technology is here — from tablets and cell phones to high-speed connections, Google TV and game boxes that stream movies — and too many big players are invested to let it completely fail.

A Safe Well-Lit Environment for Advertisers

The portals hope that while they have to spend a lot to get great content made, they can get many times more in ad revenue.

User-generated videos of dogs, cats and cute babies can fetch millions of views, but the advertising rates can be as low as $1-3 per thousand.

By contrast, ad rates on professionally produced content are ranging from $15 to $40, said John McCarus, who hosted Digitas’ recent New Front event, at which many of the major players showed off their new programming initiatives.

“They’ve got big enough audiences now, and they believe they can charge the premiums to deliver a premium audience to premium advertisers,” McCarus, who is the ad agency’s vice president and director of Brand Content, told me.

The big portals seem to be discovering that aggregation and optimization — the big trends of previous years — will not alone bring the kinds of traffic they want.

One reason is that search engine algorithms have been tweaked to try to diminish the rankings of sites that mainly re-publish what others have done.

To try to ride the new wave, the portals are attracting some of the biggest names in TV and film to produce their original programs. Each is trying out different concepts and business models.

Hanks’ “Electric City” is a dark, dystopian animated series in which the hunt for electric power controls people’s every move.

MSN executives at New Fronts showed off an interactive show for children that lets them pretend to participate with celebrity chefs preparing meals, all through the Kinnect gaming system.

“We see what’s happening [on the web] like the advent of cable,” said Jamie Byrne, YouTube’s global head of content strategy. “Now, we’re transitioning from cable delivery of content to Internet delivery, from hundreds to thousands of channels.”

Chris Dale, a spokesman for Google, YouTube’s parent, said via email that the producers’ advance will be applied against future advertising dollars the videos bring in, and that the producers keep the rights to their content.

Meanwhile, AOL, in the midst of reshaping itself into a media company, is spending millions to acquire and produce original content.

Having already purchased TechCrunch and The Huffington Post, and having launched blogs on politics, finance, lifestyle and entertainment, it’s also creating 14 video channels. Heidi Klum, Queen Latifah, and top TV producer Mark Burnett will all have shows. A live political show will adjust its flow according to feedback from the social stream.

Netflix, Amazon and Hulu are producing their own shows, too, taking small steps away from simply being platforms for others’ content — which has, no coincidence, become increasingly difficult to acquire.

Amazon this month solicited proposals for original children’s and comedy series it said it will develop for its Instant Video service.

Netflix in February launched “Lilyhammer,” an original dramatic series starring Steve Van Zandt, and is also producing “House of Cards,” starring Kevin Spacey, and a new season of the comedy “Arrested Development,” which was dropped by the Fox TV network.

Some tech companies, too, are looking to produce their own content in the hopes of attracting more users and engagement — and revenue — and, as with AOL’s moves, it’s not only video.

Tumblr, the blogging and social platform, earlier this month launched Storyboard, a new “home for community content” that features original stories by Jessica Bennett, who is also an editor at Newsweek and The Daily Beast.

Remark Media, formerly known as How Stuff Works International, is transitioning from a company that licenses content management technology to also becoming a publisher in potentially profitable niches such as personal finance and health.

“How big, ultimately, is your market for licensing?” Remark Media CEO Carrie Ferman asked, noting that large publishers, many squeezed by declining revenues, are resistant to buy tools they believe they can develop on their own. “I wanted to be able to use this amazing technology and design and do content in a different way.”

The company has hired Mike Benzie, formerly with Yahoo in Atlanta, as editor-in-chief and is bringing on more editors, Ferman said. It’s also acquired Banks.com and is launching a personal finance site called Dimespring.

There’s no guarantee that any of the initiatives will stick, and it’s certain that not all of them will. But with so many making big financial bets, I’d be surprised if some of them don’t succeed.

The better the content on the web, the more eyeballs will come, and the longer they will stay. For now, at least, professional content producers — especially high-profile, big names — will be able to make a buck by making content for the web.