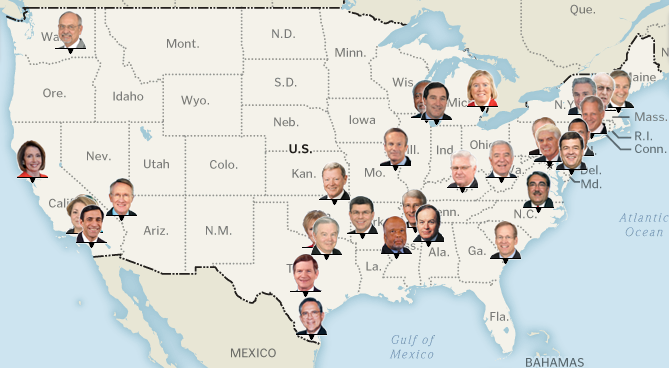 Just after it had produced a major project investigating how federal earmarks brought millions of dollars to the backyards of particular members of Congress, the Washington Post's investigative team was cut by two-thirds.

Jon Stewart is really, really funny when he makes fun of journalism. In “The Daily Show’s“ parody of the broadcast and cable news product, the show’s writers and producers skewer not only the gloss, polish and stilted tone, but also the editorial decisions.

But it isn’t just TV. The Onion is really, really funny. It makes fun of print journalism, and it does it with such brilliance that journalists love it. And the headlines on Jay Leno’s regular routine? They aren’t made up. They’re sent in by viewers from real papers (so there, crowdsourcers).

Is learning how to write basic code to solve a problem harder than reading and understanding the legislation for the Affordable Healthcare Act?"

ADVERTISEMENT
A headline from a segment on Jay Leno.

But there’s a news product that comedians and satirists can’t turn into a joke. It is really, really hard to make fun of data-driven investigative journalism. There’s something about it that strips away anything worthy of lampooning.

The topics in data-driven journalism are profoundly insightful, ranging from the curious to the deadly serious. The research and work that go into creating the stories are even more intense in an age of big data and information technology. The presentation of data-driven interactives online are visually astounding, technically robust, and amazingly informative.

But sadly, the greatest threat to this form of journalism comes from the journalism culture and industry itself.

The News Nerds of NICAR

The data-driven investigative journalism community, and it is tiny, just gathered over the past weekend in St. Louis for the 2012 NICAR conference (NICAR is the National Institute for Computer-Assisted Reporting). The conference is different from other journalism conferences, or even online journalism conferences (which are starting to resemble plain, old journalism conferences as the cultures combine). At NICAR, people work in workshops to learn and do new things. There isn’t a big emphasis on networking or evangelism. One attendee even noted that there were no business cards exchanged. But they do give awards to their work.

However, their work is unlike the journalism that comedians skewer.

These data-driven interactives are not just stories — they are landscapes to explore, conclusively revealing the things that journalism strives to bring to the public attention without the trappings of the industrial journalism mindset. These are not the talking point quotes that go unquestioned on Sunday morning talk shows. They are not the formulaic newswire stories where the reporting amounts to three sources rounded up from the usual suspects: spokespeople from government, think tanks and well-financed advocacy groups. They’re windows into reality created by scraping real information, not versions of the truth created by ideology. They’re the stories of thousands of people, read from the footprints left behind in the digital ether, told in ways that can only now be divulged with the tools of software and computers.

Even the makers and builders of the web outside of newsrooms respect the work that developers and designers in journalism are doing. Aaron Pilhofer and the data team at the New York Times don’t fix the printer for journalists; they write software on the schedule of producing daily stories. The APIs from the Sunlight Foundation power apps that put government data at any developer’s fingertips, revealing the money in politics by following the paper trail. The Python-based Django web framework was born in a newsroom, and now even Google works with that developer community.

Quick, search your minds for a time when you heard journalists were influencing the world of the web instead of being threatened by it.

These makers of the web who stay in journalism seem devoted to serving the public more than they serve their own needs. They could make more money in go-go Internet startups and social media spaces. But even how they use social media is different from the rest of the mainstream media-centered Internet. While corporate mindsets and social media gurus seek to leverage Twitter and Facebook for promotion, networking and audience, the news designer and developer community were there using it long before the gold rushers. They use it to collaborate and share information about how to do the work they need to do. These people aren’t interested in huge follower counts; they speak in the same terms and on the same level they do in their IRC rooms.

Hackers are Hacks too

Sadly, though, they are under threat, along with the rest of the news industry. As the Washington Post announced the sixth round of staff reductions in five years recently, it was learned that the investigative team would be reduced by two-thirds. This is the same team that had just produced an astounding piece of work highlighting the earmarks that landed millions of federal dollars right in congressional representatives’ backyards. The Post is doubling down on a strategy of covering politics, not investigating the issues under the politics.

But hacker journalists don’t face the same fate as other journalists. It isn’t just that their skills are in demand — they are. Salaries for Django and Python developers hit six figures while a new TV reporter or copy editor is looking at high 20s or low 30s. It’s because they actually know how to make their own products and can therefore make their own future.

And we can really see it in their work. Their ability to understand and relate the information of how to develop and build software tools to do their jobs is the same ability that allows them to understand and relate the massive amounts of data that government and businesses use to obfuscate their real workings from the public. Their abilities as journalists are not dependent on echoing quotes into a narrative; they actually produce new knowledge that enhances the public’s understanding of issues that are critical to the future. Code is their medium.

But there is a culture in newsrooms that doesn’t understand what these designers and developers are doing, and that culture doesn’t accept what it doesn’t understand. It is either viewed as magic or computer science, and then dismissed as something that “I don’t get.” The idea that designers and developers are there to serve journalists is the same mindset that viewed the press gang or the station engineers as the trolls who came out at night to magically turn words and pictures into something that the public could see. It is changing, but is it changing fast enough?

Do you get it or do you get out of the way?

It’s pretty easy to make fun of the news. People have been making fun of TV news for a long time, even before “Saturday Night Live” started doing Weekend Update in the ’70s.

And it wouldn’t be funny if it didn’t have some truth to it. It isn’t just the style of the presentation that’s being mocked or adopted for comedic effect. The comedy packages on Jon Stewart are developed through research, reporting and editing — they’re stories that comment on the stories that are chosen by the most influential news media and delivered in just the way the news media delivers them.

And we should mark well that they’re no longer just making fun of the style and presentation of the news; the source of the most biting comedy now is directed at news judgment and journalism itself. It’s lack of detail, lack of context, lack of understanding. Too much trust in sources and not enough research. Too many facts lost in trying to create a readable story.

But why is it that only old-school journalists make fun of the news nerds? This is the future of journalism, or at least a big part of the future, and it is happening now. It isn’t telling other people’s stories, it’s creating tools for people to discover their own stories or finding how public information relates to the story of their lives.

You can be a part of it, but you’ll have to make the effort. They can explain it to you, but they can’t understand it for you. You have to read the manuals and make the mistakes made when learning anything. You have to find the story yourself and understand it, just like journalists do with anything they’re assigned.

But really, is learning how to write basic code to solve a problem harder than reading and understanding something like the legislation for the Affordable Healthcare Act and crunching the numbers from the Congressional Budget Office in a spreadsheet to decode the spin doctors?

It only is if you’ve never tried.

One response to “Data-Driven Investigative Journalism: No Laughing Matter”