When Should You Introduce Your Child to a Smartphone or Tablet? 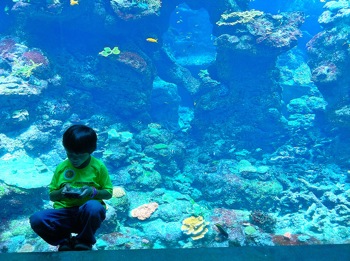 Photo by "Dave Shea on Flickr":http://www.flickr.com/photos/mezzoblue/.
Parents need to be models for their children. While we're all embracing these great aspects of these digital devices, parents have to strike a balance, turn them off and spend real time with their children." -Kathleen Clarke-Pearson
Click here to read the whole series
ADVERTISEMENT

This week on MediaShift, we’re running a special series exploring the relationship between kids and media. The following piece comes from our partners at PBS Parents.

From the time they can grasp an object in their hands, children reach for electronic gadgets of all kinds, particularly our cell phones and computers. When you start noticing more child-size fingerprints on your iPad than your own, it may be time to consider introducing your child to a handheld wireless device.

Here are some helpful tips on when and how to introduce your child to these technologies.

Just because toddlers like to push buttons and watch videos does not mean they are ready for a computer. Experts recommend waiting until your child is at least preschool age. “Children under two years of age learn best from real-world experiences and interactions, and each minute spent in front of a screen-based device is a minute when your child is not exploring the world and using their senses, which is extremely important in their development process,” said Dr. Carolyn Jaynes, a learning designer for Leapfrog Enterprises. “However, by age three, many children are active media users and can benefit from electronic media with educational content. This content often uses strategies such as repeating an idea, presenting images and sounds that capture attention, and using child rather than adult voices for the characters.”

Your child may be ready sooner or later, depending on the level of supervision required.
“In a supervised environment, children as young as four or five are able to engage in learning activities using smartphones and tablets of all kinds,” said Jeannie Galindo, supervisor of instructional technology for the Manatee County School District in Florida. “In an unsupervised environment, I wouldn’t recommend a smartphone or tablet purchase for a child until at least between the ages of 11 and 13.”

Experts recommend parents be very involved in their child’s experience with electronic devices, especially at a young age. The goal is balanced exposure. “Parents should keep media screens in family areas so that a child’s media usage can be monitored, and TVs and computers should be kept out of bedrooms,” Jaynes said. You can help your child get more out of a smartphone or tablet by sharing in the experience. Engage with your child as he tries out a new app, asking questions about the game and pointing out different aspects of the content. This practice, typically called “co-viewing” when applied to TV-watching, can help increase your child’s comprehension skills, Jaynes said.

However, doctors warn not to underestimate the learning power of reading a book with your child or spending time exploring the outdoors.

“Parents need to be models for their children. While we’re all embracing these great aspects of these digital devices, parents have to strike a balance, turn them off and spend real time with their children,” said Kathleen Clarke-Pearson, a clinical assistant professor of pediatrics at the University of North Carolina School of Medicine in Chapel Hill, and spokesperson for the American Academy of Pediatrics on communications and media. “The real world is a very important place for children to develop cognitive, social and language skills.” Clark-Pearson suggests allowing your child to take photos of bugs with your iPhone, then going online together to read more about the insects in the images they capture.

As your child gets older, you can allow for more freedom. Galindo suggests using a gradual release model where you allow the child more time with the device as he proves he can handle it. Also keep in mind the risk of eye problems that too much screen time could cause. “Some clinicians suggest the 20-20-20 rule: every 20 minutes, spend 20 seconds looking at something 20 feet away,” Jaynes said.

Whether you opt for a smartphone through your wireless carrier, or for many of the other tablets that continue to hit the market, there will be plenty of kid-friendly content to consider. “It’s important to focus on the content and message when making age-appropriate media choices. What children watch and play matters,” Jaynes said. She recommends that parents learn to distinguish between educational and entertainment-based content. Another good idea is to look for an age range listed on the app, keeping in mind what your child can handle.

For users of the iPad or iPhone, there are many apps that teach basic math, metric conversion, time, money and fractions, geography, the U.S. Constitution, Shakespeare, as well as tools for learning art and music. LeapFrog, known for its educational games and products for children, recently introduced a tablet for children ages four to nine called the LeapPad that has its own apps. Parents can also download apps from Zoodles.com, and check out sites like Common Sense Media or SmartAppsforKids.com that review kid-friendly apps.

“There are many games and interactive activities on mobile devices that are not necessarily about school subjects but still useful for children and beyond purely entertainment,” Jaynes said. “Games and activities that engage children in thinking skills like memory games, puzzles, spatial reasoning activities; nurturing skills such as digital pets; and creative skills – drawing, making music – are also great choices.”

Another Dimension of Learning

For school-age children, a smartphone or tablet can give them an additional learning layer, beyond the traditional classroom or book. “Smartphones and tablets provide students with multiple opportunities to access content and engage with curriculum,” Galindo said. “They connect students to the world beyond the four walls of their brick and mortar buildings and give them access to real world experts solving real world problems in real time. Technology makes their learning relevant.”

6 Tips for Buying Children’s Apps
When Should You Get Your Kid a Cell Phone?
Tips and Strategies for Raising Children in a Digital Age
Apps from PBS KIDS