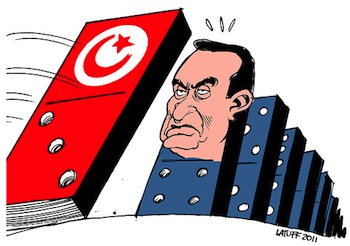 First Tunisia, then Egypt? Social media and the Internet played big roles in the recent events in both countries. Image by Hibr via Flickr

Even though they’re far away from the center of the action in Cairo, Chinese web users felt the impact of the current demonstrations and political change afoot in Egypt. Chinese users searching for “Egypt” on Weibo, the Chinese version of Twitter, came up empty, and 467 sites were reported inaccessible after a call for a “march of a million” was issued in Cairo days ago.

For roughly a week now, the journalists and bloggers spreading information about the situation in Egypt have been harassed been by the military. Yesterday and today saw the worst outbreak of violence against journalists yet, as evidenced by this video of CNN’s Anderson Cooper and crew being attacked by a crowd:

This kind of political and social change is about people behaving bravely; but social media can help bring an issue to the attention of the international community."
ADVERTISEMENT

Plus, CNN, BBC, Al Jazeera, Al-Arabiya and ABC News staffers were attacked too. As of this morning, reports have been flowing on Twitter and in the mainstream press that journalists are being detained by the regime, while the physical attacks on them continue in streets and hotels.

Serge Dumont, a Belgian reporter, has even been arrested and accused of spying. What started with relatively peaceful demonstrations has turned into a violent and deadly case of repression by government — and it is playing out in real-time thanks to social media and television.

The demonstrations and political fallout in Egypt are reminiscent of what began on December 17 in Tunisia, when Mohamed Bouazizi, a young fruit vendor, set himself on fire in an act of protest. But one important difference between Egypt and Tunisia is that official media in the latter did not cover the event, and journalists were harassed when trying to get to the city of Sidi Bouzid.

In Tunisia, the official media blackout was challenged by amateur video and pictures, which often became the most important information coming out of the country. Soon, #SidiBouzid became a popular Twitter hashtag, and Facebook began filling with reports and infromation. The Internet was the place where pictures and videos of government repression were assembled for the world to see.

Finally, on January 13, Tunisian president Zine el-Abidine Ben Ali fled the country after a TV interview showed him to be nothing but a weak man in power. Three days later, the transitional government got rid of the Information Ministry and Slim Ammamou, a blogger who was released from prison just four days before, became Secretary of State for Youth and Sports.

During the Ben Ali regime, information was strictly controlled. All but three newspapers were controlled by the government and the cyber-police — also called Ammar404 — kept themselves busy by filtering opposition websites and installing surveillance systems in Internet cafes and email providers. The result was that Facebook become one of the only places where freedom of speech could flourish in Tunisia. (The regime attempted to block Facebook in 2008, but had to abort the idea.)

Forty percent of the population has access to the Internet in Tunisia. It was this group of connected citizens who demonstrated that online buzz and chatter can grab the attention of international media, and thereby help bring about change. Of course, this kind of political and social change is about people behaving bravely; but social media can help bring an issue to the attention of the international community.

The same can also be said for Egypt: Social media proved a powerful and constant source of reportage, but it was the people in the streets who stood up.

On January 31, five foreign and Egyptian journalists from the pan-Arab broadcaster Al Jazeera were interrogated by the Egyptian military, and their equipment was confiscated. They were released, but the day before Egyptian authorities ordered the closure of the network’s Cairo office. Al Jazeera denounced the move as an attempt to muzzle open reporting and urged Egyptians to send blog posts, eyewitness accounts and videos to get around the censorship.

Much in the same way that the Persian Gulf War was a defining moment for CNN, the uprising in Egypt has been something of a coming out party for Al Jazeera’s English service. Its website has seen a 2,500 percent increase in web traffic, with a notable portion of that traffic coming from the U.S. That’s quite a feat, since the vast majority of U.S. cable carriers do not offer Al Jazeera English. (You can see the Al Jazeera English live feed online here.)

While people around the world were watching the live stream of Al Jazeera’s coverage, those in Egypt began reporting problems with their Internet connections on January 26. There were particular problems when attempting to access the online newspapers Al-Badil, Al-Dustour and Al-Masry Al-Youm. Access to Al-Badil and Al-Dustour was subsequently blocked altogether, while Al-Masry Al-Youm experienced major problems. A huge online blockade was reported the night of January 27, which also happened to be the day before a general call for a Friday protest.

Four local ISPs were forced to stop their services. Only Noor was still working before it shut down at 11:30 pm local time earlier this week. In order to prevent the disruption of their services, Google and Twitter now allow people to tweet just by making a phone call. Facebook, which was intermittently blocked, issued a statement condemning the Internet shutdown.

“Although the turmoil in Egypt is a matter for the Egyptian people and their government to resolve, limiting Internet access for millions of people is a matter of concern for the global community,” said Facebook spokesman Andrew Noyes in a statement. “It is essential to communication and to commerce. No one should be denied access to the Internet.”

In terms of new technologies, the Internet wasn’t the only target. The authorities began jamming mobile phone communications in locations where protesters gathered. Representatives of Vodafone and Mobile Nile denied any involvement in the disruption of service and placed the blame on Egyptian authorities. And today Vodaphone released a statement saying that the government also forced it to send messages over its network

Free Press, a U.S. non-profit organization working for media reform, has denounced one American company, Boeing-owned Narus of Sunnyvale, Calif, for its relationship with the government. It sold Egypt “Deep Packet Inspection” equipment that can be used to track, target and crush political dissent over the Internet and mobile phones. Before January 27, mobile phone services were disrupted only where the protesters gathered. But on the night between January 27 and 28, SMS and phone connections were interrupted and only partially reestablished on January 29.

As of this writing, news organizations are reporting that Internet access has been restored in Egypt, with Facebook and Twitter coming back online for the populace. This comes at a time when clashes in the streets have turned violent against citizens and journalists. With the Internet and social media back to normal, let’s hope the same can soon be said for the Egyptian people.

This post was made possible thanks to the contributions of the Middle East and New Media desks of Reporters Without Borders.

Image of Egypt demonstration by Beacon Radio via Flickr

One response to “Social Media, Facebook Help People Stand Up in Tunisia, Egypt”