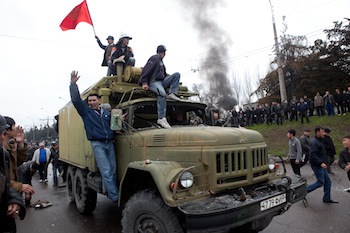 Back in 1996, my Columbia University colleague Jack Snyder and his co-author, Karen Ballentine, published a ground-breaking article called Nationalism and the Marketplace of Ideas. The essay used Serbian broadcasting and Rwandan radio to illustrate how hyper-nationalist media could be used to incite political violence.

Today’s online media have the potential to be used in a similar fashion — and this has been the case with the current ethnic violence in Kyrgyzstan. Prior to this development, online media have played many positive roles in Kyrgyzstan and other former Soviet republics, according to David Trilling, the Central Asia news editor for EurasiaNet.org, an online news service supported by George Soros’ Open Society Institute.

The media development community must keep the need for responsible content on the agenda -- along with ways to promote it in life-or-death situations."

“Before the April uprising that ousted President Kurmanbek Bakiyev, social networking sites and chat rooms such as diesel.elcat.kg were becoming the last fora for critical reporting on his corrupt regime,” Trilling told me. “As [Bakiyev] silenced Kyrgyzstan’s few trusted, independent media outlets, bloggers filled the information vacuum. But reporting anonymously, many bloggers have a tendency to stretch the truth or report rumor as fact. By undermining the credibility of the profession — because Internet reportage is lumped into the same category — these bloggers hurt the few journalists brave enough to report accurately without fear or favor.”

Trilling oversees an operation that scouts out journalists to form a regional network of online reporters whose work is vetted and edited. Those who fail to meet standards of accuracy and independence are first warned, then dropped from his site’s roster.

“There was an information blackout during the April uprising,” he said. “As the protests gained strength, Bakiyev cut off international Internet traffic, forcing Kyrgyz to rely for information solely on Internet sites hosted locally.”

Kyrgyzstan has roughly 5 million people. The principal ethnic groups are the Kyrgyz (about 70 percent of the population), Russians (roughly 9 percent), and Uzbecks (about 15 percent). Uzbecks are concentrated in the south. For decades, these populations were locked in the grip of Soviet authoritarian rule, but after independence in 1991 the country became subject to local despotism and ethnic rivalries.

Internet penetration in Kyrgyzstan has zoomed from near zero in 1998 to over 850,000 people in 2008. But the country has struggled to create public information systems via any medium. Government censorship of print and broadcast outlets has led many citizens to the Internet. Trilling said that has been a mixed blessing, especially during the recent crisis.

“In the absence of credible, trusted local media, many Kyrgyz turned to social networking sites and chat rooms, where rumors ran wild,” he said. “At one point on the first or second day, a rumor quickly spread that 50,000 Bakiyev supporters were marching on Bishkek, spreading panic throughout the city. Other posts reported erroneously on casualty numbers and international invasions, sometimes terrorizing the population. More than once, I heard, ‘Tomorrow there will be shooting again in Bishkek.’ Many think such rumors may have been spread by Bakiyev loyalists to sow panic, or regional intelligence agencies interested in expanding their influence over a worried population.”

Of course, sites such as EurasiaNet and Global Voices Online have helped to provide a remedy for the information blackout. The BBC is enlisting crowdsourcing with its online call for local eyewitness reports.

Social Media in the Developing World

In many ways, Kyrgyzstan serves as a laboratory for an ongoing debate on the Twittersphere regarding the role of social media in the developing world. Think Poli Sci 101. Rousseau sees man as fundamentally well-intentioned, while Hobbes says man’s failings are only mitigated by controlling his baser desires. The so-called “cyber-utopians” (such as Ethan Zuckerman of the Berkman Center for Internet and Society, NYU’s Clay Shirky, and Ushahidi’s Patrick Meier) stress the positive aspects of social media in democratizing access to expression and harnessing the will to do good.

They are countered by the more pessimistic vision of analysts such as Evgeny Morozov, who warn that, in the wrong hands, social media serve as catalysts for ethnic violence and political manipulation.

In a recent briefing at the Center for International Media Assistance in Washington, Patrick Meier (updating a prior presentation) warned that even a platform as powerful as Ushahidi cannot function in isolation: “Its success depends on the strength of the underlying organization, staff, program, policy, and monitoring and evaluation framework.”

The problem, he said, “is the vacuum of data-driving empirical studies on impact. Now you just have anecdotes — Morozov versus Shirky.”

Kyrgyzstan’s current conflict offers another set of anecdotes that, in themselves, cannot define a new theoretical or policy framework; in fact, they offer ammunition for both sides in the Utopian-versus-Hobbesian debate. But with enough time and purpose, a collection of anecdotes can become a study. In the meantime, the media development community must keep the need for responsible content on the agenda — along with ways to promote it in life-or-death situations.

Photo of Osh by Margaret Morton

Anne Nelson teaches New Media and Development Communications at Columbia University’s School of International and Public Affairs, and consults for a number of foundations on media issues. She’s on Twitter as anelsona. She was a 2005 Guggenheim fellow for her recent book, “Red Orchestra: the Story of the Berlin Underground and the Circle of
Friends Who Resisted Hitler.”