Newsrooms Should Use Blogs to Battle Bloat, Complexity 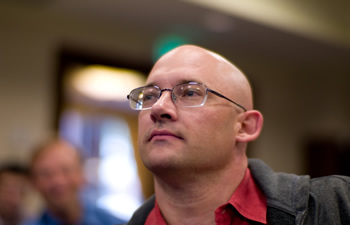 Clay Shirky sounded the alarm about complex organizations. Image via Joi on Flickr

What’s the relevance for media companies? Shirky wrote that there are two ways to generate profits: Raise revenues above expenses, or cut expenses below revenues. “For many media businesses, that second option is unreachable,” Shirky wrote.

The reason has to do with organizational culture and a well-known fact about bureaucracies: That it is far easier to add layers of complexity, rather than eliminate them.

His rather chilling but nicely worded conclusion:

When ecosystems change and inflexible institutions collapse, their members disperse, abandoning old beliefs, trying new things, making their living in different ways than they used to. It’s easy to see the ways in which collapse to simplicity wrecks the glories of old. But there is one compensating advantage for the people who escape the old system: when the ecosystem stops rewarding complexity, it is the people who figure out how to work simply in the present, rather than the people who mastered the complexities of the past, who get to say what happens in the future.

I’ve been thinking about the lessons newsrooms and individual journalists can draw from this.

Complexities in the Newspaper Business

Going digital further increases this complexity, especially in the case of the integrated newsroom. It involves producing stories all day and night, creating animations and visualizations, shooting video.

On top of this, many newspapers also run blogs. But rather than seeing blogs as just another layer of complexity, the reality is that they can bring a powerful piece of simplicity to a news organization. Blogs can battle complexity.

In some cases, a kind of subculture emerges around blogs run by news organizations. This creates a focused, immediate, interactive and informal community. Running a blog is much simpler than producing a newspaper and website. Blogs started out as one-person projects and have developed into a formidable media form. If you want to get up-to-date news and analysis about technology, chances are that subscribing to the feeds of a number of tech blogs will help you more than reading mainstream newspapers.

Fellow journalists tend to shrug when I say this, claiming that it might be true for a very specialized beat, but not for the broader stuff. They are mistaken. First of all, technology coverage is not necessarily more specialized than sports, finance, politics or culture and entertainment. Second, blogs are becoming very efficient in other beats as well. For my beat, finance, an increasing number of academics and pundits run excellent blogs.

I think it’s a telling sign of the times — and where blogs fit in — that so many newspapers have started running their own stand-alone blogs. Famous examples are the markets blog of the Financial Times, FT Alphaville, or All Things Digital from the Wall Street Journal. These blogs are very good at putting out news and analysis and interacting in a lively way with their communities. It’s anything but a complex experience for readers.

Sure, they benefit from the marketing power and brand name of the flagship publication. But their cost is extremely low compared to those of mainstream media. FT Alphaville, for example, has been profitable since its earliest days.

Tips for Newsrooms and Journalists

Though people have begun to talk about the end of blogging, I think the complex nature of news organizations is making it more important than ever before. With that in mind, here’s three tips for larger newsrooms to help them make the most out of blogs:

if you get the opportunity to run a blog under these conditions, don’t hesitate. You’ll learn to be your own publisher, all while enjoying the benefits of getting a salary. However, you should realize that one day you may stop receiving that salary — the day that the big machine around you breaks down. And that possibility makes building a blog even more important. It’s called personal branding and, though I know many journalists hate the concept, it’s essential.

It’s essential because when the complexities of the system around you causes a breakdown, you’ll be on your own. By running a blog and being part of a community and conversation, and having developed an entrepreneurial approach, you’ll have built a network. In the end, that means your chances to survive in tomorrow’s media will be that much greater. The same is true for a big, complex organization that can embrace the simplicity of blogs and set their people free to make them work.

What if Shirky and all the other doom-and-gloom prophets have it wrong? What if mainstream newspaper groups manage to flourish again? Well, the organizations and people who have built strong blog brands will be far more valuable than others. Running a blog is not egotistical — you’re doing your newspaper a big favor, especially in these complex times.

Does what Clay Shirky said about complexity and the difficulty for large complex organizations to correspond with your experiences? Do you think blogging can help news organizations survive?

2 responses to “Newsrooms Should Use Blogs to Battle Bloat, Complexity”