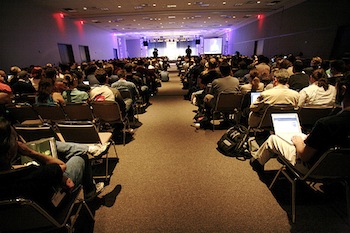 The crowd gathers at one SXSWi keynote. Photo by Kris Krug

As SXSW Interactive comes to a close and SXSW Music kicks off, it’s worth taking a look at the ideas, trends, discussions, and issues that dominated the four-day technology summit. Here are the five areas that stood out the most to me.

Every year there is a product or two that monopolizes most of the buzz — for example, you couldn’t go ten feet in 2008 without hearing a discussion about Twitter. For 2010, the buzzed-about phrase was without a doubt location-based services. Although the start of this discussion was in 2009, these mash-ups of geography and social technology really hit their stride this year.

Foursquare and Gowalla are the clear leaders in this space, as evidenced by the major presence enjoyed by both at the conference. Foursquare had a record 347,000 check-ins in one day this week, and the use of the service will certainly continue as the music crowd floods Austin.

The discussion I had with most people centered around the question, “What next?” As in: Now that these services are gaining momentum and adoption, where is the business model? Other than high-level brand partnerships and individual locations offering incentives for customers to check-in, few other monetization and call-to-action results have been seen. I see plenty of value in getting 10 percent off my order if I am the Foursquare mayor of a restaurant, or in allocating a big ad spend for a custom promotion, but where is the middle ground for everyone else?

But apart from that, you know you’re hitting some level of critical mass when CNN chimes in on how to use Foursquare to be cool (or at least not uncool).

In my 2009 wrap-up piece, I stated that 2010 would be the year of analytics. The data has been available for ages, but the tools to turn raw data into information — and better yet, knowledge — have finally found a strong value proposition. More and more products are emerging to monitor and analyze Twitter activity, social media trends, community management results, and overall impact and impressions.

Google Analytics is still a strong contender in the space, with almost everyone mentioning this as a core piece of the puzzle. Platform-specific tools such as Twitter Counter and bigger-picture services such as Radian6 were discussed at great length and examples were provided of their functionality.

The current Holy Grail of analytics (and I bet a buzz-topic at SXSW in 2011) is sentiment analysis — not only knowing who is saying what how often, but getting a feel for the tone and meaning of what they are saying. Be on the lookout for more discussion and tools as time goes on. (MediaShift’s Nick Mendoza looked at sentiment analysis related to the Oscars recently.)

There is no lack of articles on the multiple disappointments around this year’s panels and keynotes (start here and here). Spotify’s Daniel Ek and Twitter’s Evan Williams both brought in packed houses, but by the end of their talks the attendance was sparse and the content was thin.

As someone who speaks at and attends many tech and music conferences, I’ve seen my fair share of highly informative panels, and have had plenty of my time wasted. I wish I could report that SXSWi had a non-stop stream of amazing takeaways, but unfortunately it didn’t go that way.

It’s not for lack of relevant, forward-thinking topics. And it’s certainly not for lack of amazing speakers who are getting big things done. In my experience, it comes down to two things: Having to cater to a very wide audience with varying skill levels, and only having a short time to address a long list of topics. The solution? Keep the panels focused on the core topic — I’m talking to you, moderators — and keep in mind that the audience can read theory on any blog; what they need are actionable takeaways.

The reason I left most panels disappointed was that I felt it was a missed opportunity. With such brilliant and accomplished panelists, I should have walked out of the room with a few action items I could implement immediately. This was very rare.

The attendance at this year’s conference says something positive about the state of the tech industry. Last year’s attendance was approximately 10,000; this year, there were over 15,000 badge holders. The feeling is very reminiscent of the mid-‘90s in Seattle, when a new wave of technology and investment quickly expanded the marketplace.

What seems great for the industry — a glut of big thinkers and tech geniuses — is not as ideal for the conference itself. Getting into panels meant waiting in long lines and, often, only getting in when someone else left. The same thing happened at most industry parties, where the RSVPs far exceeded room capacity. It was a constant feeling up “hurry up and wait.”

Fortunately, AT&T thought ahead and brought in an extra cell tower, providing massive bandwidth for what seemed to be the biggest concentration of iPhones on the planet. I can honestly say it was the best 3G coverage I’ve ever had.

Something I noticed this year that I hadn’t seen near as much in prior years was a number of parallel conferences, both perceived and actual. Depending on your interests and network, the conference experience tends to vary widely. In a single night you can find yourself in the middle of a raging party with young (and wealthy) tech entrepreneurs, a serious business dinner with corporate executives, and in a development workshop with programmers (that’s their own unique type of party).

In addition, there were a number of side conferences, including fully off-site panels that almost felt like secret societies. Celebrity bloggers hosted workshops, independent organizations hosted roundtable discussions, and trade organizations fostered discussions focused on their interests. There was certainly something for everyone.

SXSW Music has now begun, and the tone of the conference has dramatically changed. Stay tuned for a report back on that experience…

Check out a special Photo Essay on SXSWi by Kris Krug for MediaShift.

Jason Feinberg is Vice President, Direct To Consumer Marketing for Concord Music Group. He is responsible for digital and physical direct-to-fan solutions for CMG’s frontline and massive catalog including the Fantasy and Stax labels.