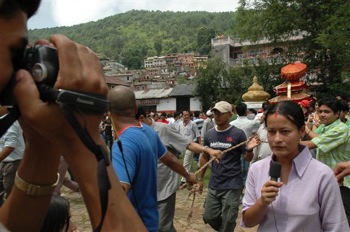 Image of reporter in Nepal via UNESCO Kathmandu

Not so long ago, some Western governments and private donors decided that investing in the media was a good way to support the development of democracy in other countries. Over the years, media development has become a vast enterprise, responsible for hundreds of millions of dollars of investment every year.

The paradigm was straightforward enough: provide training, equipment, and management support to foreign publishers and broadcasters to improve their journalism and, in the process, spur political and economic progress.

Networked journalism was regarded as frightening only a few years ago, but now it's the norm -- even in authoritarian settings." - Charlie Beckett

But that paradigm no longer meets the demands of today’s media environment.

To start with, the U.S. journalism industry is facing significant business challenges, making it difficult to offer as a template to other countries. But even if the problems associated with revenue and audience fragmentation were solved tomorrow, the media development community would still face a host of urgent new questions: How do you integrate new communications technologies, such as cell phone and Internet platforms, into a development model? How do you expand your vision to parts of the world that have been “media dark” (or where government or private monopolies limit speech)? How do you coordinate efforts from multiple actors with differing approaches and agendas?

A Need for Quality Research

Late last month, the Open Society Institute hosted a meeting of major donors, researchers and implementers to address these questions, and to explore ways to expand research in the field of media development. The event was an extension of the Salzburg Global Seminar’s project, Strengthening Independent Media, for which I have done consulting and is funded by the Knight Foundation.

Charlie Beckett, founding director of the Polis program at the London School of Economics and the author of “Supermedia,” led off the discussion.

“There’s an exciting expansion of the work, but difficulty in establishing the typology,” or classification of research data,” he said. “How do you capture it? There’s a sense of overload.”

Meg Gaydosik, a senior media advisor to USAID, reported that it’s difficult to find the most current information about media in target countries. “Anything done two to three years ago is too old,” she said.

Some of the available research can be ethno-centric. Ying Chan, from the University of Hong Kong, said much of the research emanating from institutions such as Harvard’s Berkman Center and the Poynter Institute concerns the U.S. media market.

“You can’t just transfer it to Asia, it needs to be contextualized,” Chan said. “A humongous amount of work is needed for local knowledge transfer.”

The meeting offered a useful snapshot at some of the more ambitious efforts to aggregate existing research. One of these came from Marguerite Sullivan, senior director of the Center for International Media Assistance at the National Endowment for Democracy. “Four years ago, we started pulling together everything available in English,” she said.

As a result, CIMA’s website now includes a bibliographic database indexing some 900 files of media research projects. This research is complemented by CIMA’s own commissioned reports on media development topics.

Another critical resource is the IREX Media Sustainability Index, which reviews conditions for independent media in 76 countries (primarily in Africa and Asia). But participants noted that IREX’s survey needs to be expanded to additional countries, and its indicators have to be updated to include new technologies.

New media practices are presenting another challenge to old models of development. As social media has advanced throughout much of the world, it has overtaken many areas of research in journalism.

“Networked journalism was regarded as frightening only a few years ago,” noted Charlie Beckett, “but now it’s the norm — even in authoritarian settings.”

New applications spring up in the most unlikely places, such as Ushahidi, the crowdsourcing, crisis-mapping project that was born in Africa and is growing up fast in Haiti.

The rise of online media has also prompted donors to alter their approach. The Knight Foundation’s News Challenge transcends the traditional boundaries of journalism in both scope and style. OSI and Knight have both funded Ushahidi, Global Voices Online, and myriad other new media projects. Some traditional donors are withdrawing from media funding in view of the uncertainty in the field, but Knight’s Eric Newton has urged his colleagues to “run towards the confusion.”

That said, it’s helpful to know something about the confusion you’re running towards — hence the need for research. The question of monitoring and evaluation is a critical form of research for many donors, who are under increasing pressure to answer for the effectiveness of their programs. Anyone who invests time and money in media development needs a sense of how it impacts individuals and societies, and such information isn’t easy to define.

“We need to do a lot more country-level analysis — we’ve gotten a lot wrong,” said Mark Nelson of the World Bank. “We started out by training journalists, which was a good idea in a place like Poland, given its existing infrastructure. But now we’re in a more complex environment.”

The World Bank and other donors spend billions of dollars a year in various training projects, but Nelson said that some of them aren’t “connected to reality.” In a period when donors are funding everything from cell phone texting to hip-hop websites, it is more important than ever to explore their projects’ contributions to society.

“OSI doesn’t do a lot of research unless there’s a need for a change to be informed,” she said. “Our researchers are supported by civil society groups. The studies are only taken public when they are associated with specific goals.”

There were a number of points of consensus in the meeting. One was that the most valuable media research was longitudinal, meaning it is carried out at multiple points, over various years, to chart process. Another was the need for more coordination between research institutions in order to enhance the utility of the research and reduce redundancy.

Guy Berger, from Rhodes University in South Africa (and an Idea Lab blogger), made a strong argument for enhancing the search functions for existing research.

“How do you make it accessible?” he said. “A lot of it is not findable, meta-coded, or plugged into a modern search engine.”

At the end of the day, Monroe Price from the Annenberg School asked the fundamental question: “What leads to engagement?” With a better body of research, media development will be better equipped to provide an answer.