How Programmer/Journalists Craft Their Own Study Programs 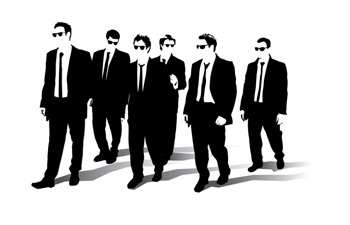 Aspiring programmer/journalists: the Reservoir Dogs of the profession?

After writing about the skills a journalist/programmer might need, I thought it would be interesting to see what college students are learning. For the most part, journalism education has not caught up with the innovations taking place in the industry. Many programs don’t offer more than an introduction to working with the web, so some students have to teach themselves.

Remember the sidewalk scene from “Reservoir Dogs” that showed a group of tough guys walking down the street? They’re all out to do the same thing, but none of them are what you’d expect. The same seems true for aspiring programmer/journalists.

I think that in many ways being a Swiss Army Knife-type is more important than knowing one thing or language." - Andrew Spittle

I spoke to six college students who are combining self-taught programming with elements of journalism education. Most work at their student papers, but only two are journalism majors. These students are putting what they know and love together in ways their formal education — and in some ways the industry as a whole — hasn’t caught up with yet.

Max Cutler is a junior at Yale University, majoring in electrical engineering and computer science.

Although he doesn’t have a background in journalism, he has been a freelance web developer since 2003, and is now the online development manager for the Yale Daily News. Cutler is in charge of creating and maintaining new features for the website.

During an interview, Cutler told me that he got involved at the Daily News because he was interested in doing more creative, unique projects. To that end, he has worked on Courant News, an online publishing platform for college news organizations built with Django, the Python framework that has become popular in the programmer/journalist niche.

His work on Courant News also got him involved with CoPress, an organization that provides support for online college media innovation.

“Once you learn a couple languages, you can pick up new ones pretty easily,” Cutler said.

Albert Sun is a senior at the University of Pennsylvania, majoring in mathematics and economics.

His interest in journalism (despite his majors, which he says confuse everyone) is in how information gets from one place to another.

He worked at The Daily Pennsylvanian (Penn’s student paper) as a reporter and then as the web editor-in-chief, and just completed an internship at the Wall Street Journal.

“I had a really boring French class and started programming on my calculator,” Sun said. He is also mostly self-taught, although he has had a few classes in theory and algorithms at Penn. He has experience with PHP, Python, ActionScript 3 and Java.

Sun is also a member of CoPress.

Andrew Spittle is a senior at Whitman College, majoring in politics.

He recently became interested in journalism when he applied for the web manager position at The Pioneer, Whitman College’s weekly student newspaper.

“I kind of lucked into the job with some minimal knowledge and used it as a way to build my experience and start experimenting with things,” Spittle said. “I’ve also been working with CoPress since late Spring.”

Though Spittle is largely a “front-end guy,” meaning he works with (X)HTML, CSS and Javascript, he has also done a lot of custom work with WordPress, is learning PHP, and is also teaching himself how to develop applications for the iPhone.

“I think that in many ways being a Swiss Army Knife-type is more important than knowing one thing or language,” Spittle said.

Whitman is in a liberal arts college, so there aren’t any programming classes offered. Spittle learns through trial and error, and by reading lots of online documentation. He’s interested in the intersection of programming, design, and information.

“I would be interested in working on app and site teams,” Spittle said. “The reporting aspect of journalism doesn’t interest me as much as designing an experience and presentation for the information.”

Daniel Bachhuber is currently taking time off from college, interning with Publish2, a company that creates tools for collaboration and linking, and running the business of CoPress, of which he is the executive director.

Bachhuber is almost completely self-taught. He took a high school course in C++, and also uses PHP. He wants to learn Python and has been looking at ActionScript and Flex as well.

He learns by working on projects and picking up the core concepts along the way. His interest in programming comes from a “desire to make something cool happen,” he said during an interview.

One of his recent projects, EditFlow, is a WordPress plugin for user and workflow management.

Will Davis is a sophomore at the University of Maine, majoring in journalism.

He helped start a newspaper in high school and learned PHP in order to build the website. Davis served as the online editor and is now the executive editor of The Maine Campus. He also works with CoPress, and his desire is to use his paper’s website to engage readers, rather than just put print articles online.

Davis developed a custom theme and plugins for WordPress, including Courier, a plugin that manages email editions. He created custom tag pages for the site, called Campus Currents, which draw from a wiki that anyone can edit. He is always looking for ways to increase interactivity.

He wants to be a full-time reporter and have a role that enables him to create special online features.

Andrew Dunn is a senior at the University of North Carolina at Chapel Hill, majoring in journalism.

He uses programming in his reporting. For example, Dunn has used Python to parse databases and clean up data. He is currently teaching himself Django.

Dunn’s interest in programming comes from his father, a programmer for IBM. He has also been inspired by the work of Matt Waite of the St. Petersburg Times.

“I really love old shoe-leather journalism,” Dunn said. But he sees programming as another tool for reporting.

Dunn created a Data Center for The Daily Tar Heel, where he is editor-in-chief.

In “Reservoir Dogs,” Mr. Pink is the only one to survive the carnage of his craft. But these students are more likely to follow their paths to success because they have the initiative and drive to learn the skills that are largely still untaught in journalism.

14 responses to “How Programmer/Journalists Craft Their Own Study Programs”