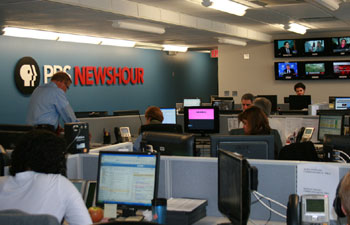 This is the first of a series of posts by Anna Shoup, the local/national editor for the program that will soon be renamed “PBS NewsHour.” She will provide an insider’s look at how the broadcast is changing, including the recent merging of its broadcast and online teams.

The “NewsHour with Jim Lehrer” is re-incarnating itself as the “PBS NewsHour” on December 7. There are a lot of behind-the-scenes details involved in creating the new program, and chief among them is a complete reorganization of our editorial teams to create a merged newsroom for online and broadcast.

We literally had to cross a creek to get to the building where they tape the program."

I’ve worked here for more than four years as part of a smart, and often experimental, online news team. Since 1995, the NewsHour’s website has tread a path familiar to other legacy news organizations in that it was growing, yet often separate from the central news operation. The online team would write, edit, produce, blog and post our own reports. Not many of us knew the details of how the broadcast team put the program together every night. And, as I have since learned, the broadcast folks were just as confused by what web staffers did to make the site work.

I’ve had people ask me where I learned HTML (I know very little), if I can scan something and make a PDF (yes, but so can most people), and why we can’t get their video up faster (it’s not magic, it takes time). In the end, we were all committed to the core mission of serious journalism that is the hallmark of the “NewsHour.” This reorganization is trying to bring these teams together.

We’ve worked to bridge physical and psychological divides. The “NewsHour” teams are in two buildings, and the online newsroom was tucked in a corner where people tended to stash chairs that didn’t match and archive beta tapes. We literally had to cross a creek to get to the building where they tape the program. We called the rest of the staff “non-liners,” and we had a slogan for our somewhat hidden newsroom: “Big Room, Big Ideas.”

Soon after we received our company reorganization charts, it became clear that the old online team was going to have to break up. I was convinced that this meant the end of our scrappy, “make it up, but make it good” creative team. In a way, it was. Our reorganizers successfully ripped up a hub of multimedia reporters, designers and editors and planted many of us in the center of the broadcast newsroom. Most of the reporter-producers that were formerly online staffers are now in a reporter’s bullpen. Our online art director now sits next to the broadcast’s graphics team. We’re now part of one team.

So Step One is complete in that we’re sitting next to each other. But our cultures are still different. This is true in the way we communicate, and the way we approach the day’s stories. Broadcast uses a newsroom communication tool called iNews to instant message and share scripts; onliners use Gchat and share story ideas via Google Docs. They ask: “talk or tape?” We ask: “audio, text, video, photos, slideshows, an interactive, or all of the above?”

In my case, I’ve been traveling the country with a broadcast team for our Patchwork Nation reporting project, and shooting footage that I’ll use for online-only videos. On my first day in the new newsroom, I tried to book a guest. Tried, but failed. The second week, I tried to get footage I shot in the field onto the program and again I failed. It’s going to take time. Luckily, some of my colleagues have had more success, and this is a result of everyone working together.

Our associate executive producer, Simon Marks, promised there would be “cross-pollination” between digital reporter-producers and broadcast reporter-producers. There’s already evidence of that becoming reality, with ideas now being shared over cubicle walls instead of across a creek.

This reorganization is enabling us to better serve our viewers and readers. We can now live encode an interview and get excerpts online within a couple of hours. Improving our speed is a big priority. To give you an idea of how far we’ve come, during the primaries the online team was once sent a cassette tape of an audio interview with then-candidate Barack Obama. We had to find a way to turn that into online content.

My co-worker and Global Health Watch reporter-producer Talea Miller has been traveling the world with an integrated reporting team. She reports to a senior producer while other people, including website editors, are also asking her to produce content.

“Because our unit already worked together closely, the reorganization has not changed that dynamic much, but we are now integrated into the foreign affairs beat so we can better coordinate all our international efforts,” she said. “As with any transition, that has meant trying to feel out what our new roles are, and [learning] how to balance new and existing responsibilities, which can be a struggle at times.”

Now that we’ve cross-pollinated teams, we’re all getting trained on the relevant technology. For example, the broadcast team uses Avid for video editing, while the online group favors Final Cut Pro. We now have four Final Cut suites in our newsroom and we’ve launched intensive training for onliners and broadcasters. I recently received an email inviting me to a breakfast session to learn how to produce a broadcast segment for the program. We plan to have people learn the different skills, figure out who’s the best at what, and work from there.

This process is all to set up for the real work, which comes when we launch the new website on December 3 and the new program on Dec. 7. In my next post, I hope to share more about the broadcast, and offer reactions from my new friends in broadcast.

One response to “Merging Online and Broadcast Cultures to Reinvent ‘NewsHour’”