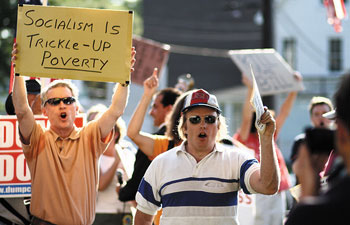 Paul Testa recently checked his voicemail and listened to a message from a hospice worker who lives in a conservative district of Ohio. He’d never met or spoken to this person before, but the worker reached out because Testa seemed like the right person to receive some important, inside information about the health care system.

Testa doesn’t work for a health department, nor is he an investigative reporter. He and Joanne Kenen write the New Health Dialogue Blog for the New America Foundation, a think tank.

“I think part of it, with the blogs, is that there is a much more targeted audience,” he told me. “You have people who come in expecting health policy coverage, so you expect a certain level of knowledge that [is different] than you would get if you were dealing with broader print journalism with a focus on the kind of eye grabbing protests, rather than the policy coverage.”

In August, the Kaiser Health Tracking Poll found that 53 percent of the public “believes that tackling health reform is more important than ever,” a decline of almost 10 percent from the year before. Some have suggested that anti-health care reform advertisements and the media’s fixation on town hall events played a major factor in this erosion. In fact, one survey found that the majority of recent mainstream news coverage of health care reform focused solely on the politics and protests of the debate, rather than specific policy. A survey from the Pew Research Center for the People and the Press found that more than 70 percent of respondents thought that media had done either a poor or “only fair” job of explaining the current proposals making their way through Congress.

Moving from the sidelines to the blogosphere

Back in the 90s, the last time the Democrats tried to push through health reform, health care professionals were forced to wait on the sidelines, or until a traditional news reporter called them for a quote. But during this current round of debate, many of them are running popular and vibrant blogs that dive deep into policy issues. The question is how much impact are they having on the national discourse, and is their coverage cutting through the horse race politics dominating cable news shows?

Jane Sarasohn-Kahn is a health economist and has been a health care consultant to the industry for over 20 years. She launched her blog, Health Populi, almost two years ago. Thanks to increased interest in the health care debate, she now receives as many as 2,000 unique visitors a day. Sarasohn-Kahn focuses on health economics, policy, and technology; over the last decade, she has examined the role the Web in playing in helping patients take control of their own health care.

“My goal is to cover one data point every day that comes across my news stream through foundations, research papers, whatever,” she told me during a phone interview. “I read everything in health and health care, because my range is broad, and my umbrella is broad. I decide either the night before or early — like 5:30 in the morning — ‘what do I want my readers to know about today?’ And I create a PowerPoint, a chart, or excerpt something … I present the point, fair and balanced right up front, and then at the bottom I drive home the ‘hot points,’ which is through my lens as a health economist.”

Like all the bloggers I interviewed for this piece, Sarasohn-Kahn agreed that health blogs offer more in-depth, thoughtful analysis than your typical cable news outlet. But she said there is still some “heavy lifting” to be done by the readers themselves.

“The fact of the matter is that most people blog to state their opinions up front, which is fine,” she said. “What I think is really useful about the blogs is that all of us try to do what I do — know a lot about a little piece of health care. So when you want to know how unemployment morphs to uninsurance, you go to my blog. And when you really want to get into some high powered wonkiness, you’ll go to Matthew Holt’s blog. If you want to know about health privacy, you better turn to Bob Coffield’s Health Care Law Blog, because that’s his schtick. We all have our specialties and our niches.”

Getting beyond horse race coverage

Testa and Kenen of the New Health Dialogue Blog told me that health care coverage in the blogosphere is mixed, and that the range of blogs makes it easy for readers to only coalesce around blogs that promote their own particular point of view.

“I think it’s mixed,” Kenen said. “I think some of the blogs also do horse race and politics, and some are worse than the mainstream press because some of them are people who have never reported or worked in Washington. And some of the health care blogs are doing the same thing that the press is doing, and not necessarily as well. And to be fair, some of the reporters are not just doing horse race. Some of the reporters are doing very high quality work on what is our health care system, and getting beyond the town halls and politics.”

Despite all this, she said that “the health care blogosphere does fill a gap.”

“Health care is extremely complicated,” Kenen said. “It’s very technical and there is an amazing number of interconnected pieces. We try to be a bridge between the public and the wonk stuff. We’re a think tank that blogs, we’re not a think tank that’s writing impenetrable economic analysis. We try to communicate policy in a political context. We’re not grenade throwers. We don’t think people come to us to watch us rant. We think people come to us to have things explained.”

I asked Testa about the more shallow coverage of town hall events and whether this makes it difficult for Americans to understand what’s in the proposals making their way through Congress.

“Being able to say what’s in the bill is kind of important,” he said. “Town halls are car wrecks and you can’t take your eyes off of them. But the people who care about the policy and the issues, at the end of the day they’ve still got these unresolved questions and so we sort of tackle that. Issues like, ‘well how do we cover all Americans?’ What’s important is that the conversation continues on even while there are all these political fireworks.”

Maggie Mahar spent years as an economics reporter writing for news outlets like Barron’s before she got a chance to write a book on health care, “Money-Driven Medicine.” It aimed to tell “the real reason health care costs so much.” The book was published in 2006, and she said it didn’t get much traction because there wasn’t a meaningful push for health reform at the time. The book was recently made into a documentary and the current debate has helped it receive favorable news coverage. In 2007, she received a call from the Century Foundation asking her to become a health care fellow. Not long after accepting the position, she began a blog, Healthbeatblog.org.

“At Barron’s I had always written these relatively long, researched stories, and here I decided to write relatively long researched posts,” Mahar told me. “I started to attract a real audience. The people who read it are quite knowledgeable, and they’ll sometimes argue with each other. I comment too, and they’ll just keep the discussion going, like a graduate seminar. I love that about it. But I will say that I’m not reaching the people out there who read the New York Times and know very little about health care, and I’m not being told much by the New York Times, and that drives me nuts.”

Many of the health care bloggers I spoke to said they receive calls from reporters asking for quotes on health care reform, which indicates that their blogs are acting as gateways for wider coverage. Mahar was recently asked to join a health care panel at the Washington Post, and every week she fields questions on the issue from Post readers.

“It’s easy to scare people about health care,” she said. “It’s very personal and people feel very vulnerable. If you tell them that they might not get as much as they’ve gotten in the past, they get very uptight. And we’re also a nation that’s terrified of death. You add all that together and it’s incredibly hard to combat misinformation. We’re not good at discussing ideas, we don’t talk about ideas. We talk about personalities and politics, and that hurts. Because this is a very complicated subject and you have to dig in and contemplate the issue to understand it, and so much of it is counterintuitive.”

Simon Owens is a social media consultant and an associate editor for MediaShift. You can read more of his writing at his blog or contact him at simon[.]bloggasm [at] gmail.com.

One response to “Can Health Care Blogs Fill the Gap Left by Mainstream News Coverage?”