How Animal Rights Activists Beat the Rodeos in Videotaping Events 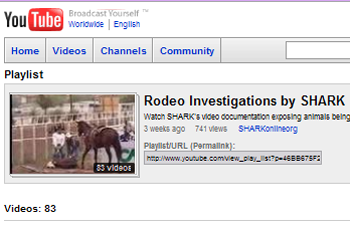 As cell phone cameras and palm-sized videocams have become cheap and ubiquitous, there is little if anything that is immune from being documented and displayed on the web, as numerous celebrities and sports stars have learned to their regret. In the realm of hard news, the result is that citizen journalists are able to bypass big media news organizations and go directly to the public with exposes that only a few years ago would have struggled to find an outlet.

One such group of “guerilla journalists” has assisted the animal activist group SHARK (“SHowing Animals Respect and Kindness”) in a campaign to videotape incidents of alleged animal cruelty at rodeo events; the videos are then posted on the SHARK website and on YouTube.

Citizen journalists are able to bypass big media news organizations and go directly to the public with exposes that only a few years ago would have struggled to find an outlet."

The Professional Rodeo Cowboys Association (PRCA), the professional group that sanctioned several of the events at which the SHARK videos were made, fought back against the bad publicity with a legal maneuver under the Digital Millennium Copyright Act (DMCA) — one that appears to have backfired. The Electronic Frontier Foundation (EFF), which represented SHARK in the matter, leveraged that backfire into a settlement which entails, according to the EFF, “a new model for handling take-down notices” under the DMCA.

The PRCA’s action under the DMCA

On the PRCA’s behalf, a notice was sent to YouTube under the DMCA, demanding that the SHARK videos be removed from the site. The DMCA permits the sending of a “take-down” notice by the owner of copyrighted material; the operator of a site that receives such a notice must remove the material promptly or risk losing the DMCA safe harbor protection from legal liability for copyright infringement. YouTube indeed removed the videos. In addition, it blocked access to all of the videos uploaded by SHARK and closed SHARK’s YouTube account.

But according to SHARK, the videos in question were created by SHARK members and other individuals concerned about animal cruelty. SHARK maintained that the PRCA was not a copyright owner with respect to those videos and therefore the PRCA was not entitled under the DMCA to demand that they be removed. Indeed, the DMCA requires a take-down notice to include a statement under oath that the “complaining party” is acting with the authority of “the owner of an exclusive right that is allegedly infringed,” as well as a statement of a “good faith belief that use of the material in the manner complained of is not authorized by the copyright owner, its agent, or the law.”

The DMCA anticipates that mistakes may be made, and that erroneous or legally unsustainable take-down notices may be sent, as reflected in the “good faith” standard mentioned above. At least one federal appellate court has ruled that an extended investigation into the underlying circumstances is not required to form the required “good faith belief,” and that “good faith” is judged according to a subjective standard.

The DMCA also contains a counter-notification provision permitting the person who originally posted the material in question to request that it be restored. A counter-notice must also be executed under oath, and reflect a “good faith belief” that the material was removed as a result of “mistake or misidentification.” SHARK filed a DMCA counter-notice, asserting that the PRCA take-down notice was “baseless,” and most of the videos were ultimately restored by YouTube.

Note that the fact that material alleged to be infringing was ultimately restored does not mean that the person sending the take-down notice necessarily lacked the necessary good faith belief, or that the take-down notice involved a misrepresentation. A copyright owner may believe in good faith that a particular use of its content infringes its rights, even if ultimately a court would conclude that it is not. Circumstances involving claims of fair use in particular are subject to disagreements between copyright owners and those that make use of their content. But fair use was not at issue in the dispute between SHARK and the PRCA.

In August 2008, SHARK brought an action against the PRCA alleging not only was the notice improper, but that the PRCA knew that it was improper and sent it anyway. The SHARK complaint alleged that “the PRCA sent the notice in order to chill SHARK’s efforts to raise public awareness of animal abuse at PRCA-sanctioned events, and not in order to enforce any perceived copyright interest.”

In its response, PRCA denied that allegation that it had no protectable copyright interest in the videos, and also pointed the finger at the media management company acting on its behalf, stating that “the controversy between the parties also includes whether Pro Rodeo Films, Inc., the third-party media management company engaged by the PRCA, had a proper and valid basis to issue the take-down notice.”

Relatively few cases have been brought over improper DMCA take-down notices, and fewer still have involved the type of “citizen journalism” activity in which SHARK and its members were engaged. But it bears pointing out that one of those few cases involved a significant victory by the Electronic Frontier Foundation representing a group of students who posted internal company emails by an electronic voting machine manufacturer that they said proved that the machines were flawed. In Online Policy Group v. Diebold, a federal district court ruled favorably on the EFF’s argument that the take-down notices were improper under the DMCA, not because the voting machine company did not have copyright rights in the emails in question, but because the students posted them under the circumstances protected by the fair use doctrine. That case was ultimately settled with a $125,000 payment by the company to the students.

The PRCA’s no videotaping rule

Because the SHARK v. PRCA action was settled without any further significant legal proceedings or a court ruling, we are left to speculate as to the basis the PRCA or its media management company thought they had to issue the take-down notice in question. The PRCA’s answer to the complaint contains a clue: The PRCA alleged that SHARK’s claims were barred by the equitable doctrine of “unclean hands” because of its “failure to adhere to rules and guidelines posted at PRCA-affiliated arenas that expressly prohibit videotaping PRCA events.” Perhaps the PRCA or its media management company believed at the time that if the videotapes were made by SHARK members in violation of that rule, it argued that the take-down notices were proper.

But making a videotape of a sports event in violation of a no-videotaping rule does not give rise to a claim under copyright law. (Although unauthorized videotaping under some circumstances might give rise to some other legal claim.) And the settlement reflects that fact.

The PRCA has agreed as part of the settlement to make a payment of $25,000 to SHARK. The PRCA also agreed that any future copyright infringement claims it makes against SHARK will be submitted to SHARK first. If SHARK refuses to remove a video in which the PRCA continues to assert a copyright claim, no DMCA take-down notice will be filed until it is reviewed by PRCA’s general counsel. One clear purpose of the provision is to avoid the issuance of take-down notices by parties acting on behalf of the PRCA who may not have the appropriate legal understanding or training, or even knowledge of the facts, to determine whether there is legal justification for issuing a notice. One hopes that short-circuiting the DMCA take-down process will save both parties time and aggravation, not to mention attorney fees.

In addition, in the course of the settlement negotiations between the parties, SHARK was also able to place on the table PRCA’s practices in enforcing its “no videotaping” rule. Thus, the settlement also includes an agreement by PRCA not to discriminate in its enforcement of the no-videotaping rule with respect to ticket holders and attendees at PRCA events. Presumably this means that if the PRCA, despite its rule, permits ticket holders and attendees generally to videotape at its events, it may not selectively enforce that rule against SHARK members or other animal activists. This leaves SHARK and its members free to continue their videotaping, unhindered by the PRCA.