More Time for Blogging! The Future Is Already Behind Us 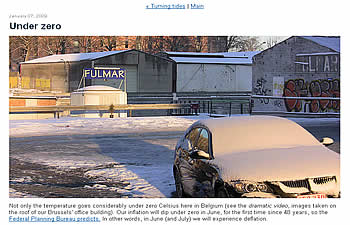 A big picture format for the blog BelgianAffairs.

At Mediafin, we started the year with some ambitious plans for our blogging activities. We want to create new blogs to involve more people, but we also want to become more active on our existing blogs. I’ll tell you about what we’re doing, the reasons behind it and how things seem to be working out at this early stage, as well as what does not seem to be working — yet.

Last year, some colleagues created an English language blog about Belgian politics and business, BelgianAffairs. Unfortunately, that blog lingered on, neglected, as our reporters had to deal with a high work load. Misunderstandings about the nature of blogging may also have contributed to its neglect. We now strive to update it on a daily basis.

Print newspaper journalists tend to compare blogging to writing columns or analytical background articles. They can thus be reluctant to blog unless they have the time to write something long and in-depth. We discussed this matter and concluded that, while we still want to write longer and more analytical posts, there is also a need for smaller posts just mentioning interesting events or stuff we found on the web. A blog should be updated at least three times a week and preferably on a daily basis.

The other issue was that print journalists are not used to taking care of images, either stills or video. Instead, they focus on text. I started publishing big stills on the blog (width about 900 pixels instead of the traditional 300) and shooting some very rudimentary video, using a consumer type camcorder or a Flip camera.

Using the Flip camera caught on. My colleagues like the simple concept and no longer feel intimidated by the technicalities of shooting and uploading video. Yay for the Flip! Flip even is becoming a verb around here: “Can I flip you about the latest employment figures?” meaning, “Can I ask you some questions on video about the employment situation?”

I also encourage colleagues to engage in discussions on Twitter, Facebook, etc., and to tell their networks about what they are blogging about and why — using tools to centralize micro-postings such as ping.fm.

BelgianAffairs is not just a blog on Belgium. We talk about Belgium as being in the heart of what Professor Richard Florida calls the mega-region — here, the Amsterdam-Lille-Brussels-Antwerp-Cologne-Ruhr Area. It is, in fact, a blog about how an important European region deals with the structural changes caused by globalization and recession. In this way, we hope to attract a broader audience.

I also deliberately post on controversial issues, like the integration of immigrants into Western European society, or the promotion of English as an official language in Belgium. That attracts more people to engage in the discussion.

In addition, we are continuing to develop our existing Dutch language financial Bear&Bull Blog by involving outside bloggers as guest writers.

Speaking of language, we are soon to launch yet another English language blog, this one on our sites Tijd (Dutch language) and Lecho (French language). This newest blog, Nekstr.com, deals with the future of the Internet, as it is formed by new startup companies.

We intend to use this blog to ask tough questions when investigating startups: Are they truly innovative? What is the business model? Our company’s French and Dutch language journalists will work together in this English language initiative. We also want to involve outside bloggers to contribute. Although we’ll have a European perspective, we also realize that we will have to closely monitor what happens in North America and Asia.

Why we think blogs are important

We’re expanding our blog efforts because we’ve found them to be important for (at least) five reasons:

1. Blogs enable journalists to present themselves and their topics in a more informal, personal way, making it easier to connect with the community.

3. Writing blogs gives a real feeling for what the Internet should be: not the electronic version of the print newspaper, but a new medium — something more instantaneous, more social, more streaming.

4. Writing blogs helps journalists be less obsessed with the competition (“Are they stealing my stories? Did they notice my scoop?”) and more open with the community (“Let’s share stories because they are important to our community, regardless of whether they’re scoops by a competitor or not”).

5. Blogs facilitate experimentation. One can quickly and easily try integrating interactive video, wikis and more. It’s also easy to stop experiments when they seem unsuccessful and try out something new.

On the positive side, blogs are fabulous learning tools. Three months ago, one of my colleagues was a beginner in financial news, but in helping to write the financial Bear&Bull blog, he’s quickly come to be regarded as an expert by his audience and colleagues alike. People learn also very fast how to use tools such as Twitter, Flickr, YouTube, etc.

But on the negative side, blogs increase the work load. A blog is a very personal experience and it hurts when you lack the time to update. We still have to write a print newspaper and the number of pages does not shrink just because we wish we had more time to blog. The newspaper has to find new angles to remain relevant in this day and age, which demands even more work and time than ever before.

This means that the blogs we run are primarily the work of the Internet journalists. They also write for the print publication, but their core job is newsgathering for our Internet branch. Some print journalists are interested, but feel frustrated because their work load does not allow them to blog very actively.

We absolutely have to continue developing the blogs. We definitely feel this is the way to go, an idea that is reflected in additions to our home page (more links, more conversational engagement with the audience, more video and pictures…).

I often wonder whether the publisher should not be more audacious. There will be a point of no return when we will have to shift our limited resources even more into the direction of our online media. Maybe that point is even already behind us.

It is also obvious that the millennial generation is not inclined at all to buy print newspapers — the only newspapers they will look at are the free sheets. Young people go for instantaneous, streaming media. They want to hear personal, authentic voices.

Mediafin now has about 115 print newspaper journalists and editors (who occasionally contribute to the online publications) and 20 online media journalists (who contribute systematically to the print publications). Only a few people work on blogs and new media such as Internet video. I hope we will not only shift more resources to the online news operations in general, but also specifically to the new media initiatives such as blogging in all its varieties, Internet video and community management.

One response to “More Time for Blogging! The Future Is Already Behind Us”