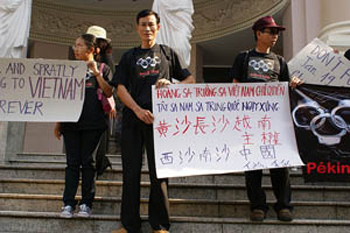 Protesters react to the arrest of Vietnamese blogger Dieu Cay.

In Vietnam, speaking out against the government can come with a hefty price.

Blogger Dieu Cay (“the Peasant Water Pipe”) — or Nguyen Van Haias in real life — is learning this the hard way. The 56-year-old man is serving a 30-month jail sentence on a trumped-up charge of tax fraud, a poor excuse for the government to try to silence a dissident whose only crime was to exercise his right to free speech online.

Dieu Cay is the founder of a group of bloggers known as the Union of Independent Journalists. Last year, he helped found another group of bloggers called the Free Vietnamese Journalists Club to focus mainly on two subjects — corruption and human rights. One of the country’s leading activists, he received recognition last October by the U.S.-based Vietnam Human Rights Network for his commitment to free expression.

Cay was arrested on April 19 in Ho Chi Minh City, before being formally charged with tax fraud a few days later. Many human rights groups have condemned his conviction; Reporters Without Borders deemed it completely unfair and unfounded.

Cay was arrested a few days before the Olympic torch passed through Ho Chi Minh City, an event the Vietnamese government was determined would go through without protests. A government website reported that Prime Minister Nguyn Tan Dung called for “absolute security” on April 20 during the torch relay and warned against “hostile forces” that might be tempted to try to disrupt it.

Authorities dubiously claimed that Cay had not paid any taxes on his private residence for over 10 years. In fact, under an arrangement allowed by the law, he rented the premises from Hanoi Eyewear Co., which in turn assumed all responsibility for paying taxes.

One of the blogger’s lawyers told Reporters Without Borders he regarded the sentence as overly severe, especially since he demonstrated during the trial that police had failed to respect standard procedure:

Dieu Cay was arrested before the authorities had even established the monetary value of the alleged fraud. In this kind of case, the person accused of fraud is first asked to pay the fine. He is only arrested if he cannot produce the money. But Dieu Cay was never asked to pay. I questioned the role of the police in court. The judge reprimanded me for criticizing the authorities. This conviction is a disgrace.

The lawyer added that the trial was a “grotesque performance” where the sentence was decided in advance and court spectators were simply “extras” brought in to give the appearance of legitimacy. Cay’s conviction was upheld by an appellate court on December 4 despite new evidence produced by the defense showing that police had prevented Cay’s ex-wife from paying the taxes in February. Cay’s property has since been seized and his family subjected to increased police harassment.

According to his son, Dieu Cay had been under close police surveillance since taking part in demonstrations in Ho Chi Minh City earlier this year against China’s disputed claim to sovereignty over the Spratly and Paracel Islands in the South China Sea. Cay had also been blogging about China’s controversial hosting of the 2008 Summer Olympics and the relationship between China and Tibet.

Free Speech in Decline in Vietnam

Human Rights Watch noted that Dieu Cay’s closed-door trial last September was followed by a new round of arrests of democracy activists, “in a thinly veiled effort by the government to silence independent bloggers, journalists and human rights defenders in Vietnam.”

In theory, the Vietnamese constitution protects free expression but the reality is very different — the ruling Communist Party tolerates no criticism. Vietnam has one of the world’s most repressive regimes, and, in the past 10 years, state control over the media has slowly expanded to include online activities. Reporters Without Borders now lists Vietnam as one of the 13 countries deemed enemies of the Internet. Vietnam is currently detaining nine cyber-dissidents.

In 2007, Vietnam became the 150th member of the World Trade Organization. While the country tried to present itself as a bastion of free speech during the membership selection process, its behavior has changed dramatically since it was admitted. According to a report published two years ago by the OpenNet Initiative, “Vietnam is actively censoring the Internet, focusing its filtering on sites considered threatening to its one-party system.”

The report compares Vietnam to China’s multi-layered approach to controlling the Internet:

Vietnam applies technical controls, the law, and education to restrict its citizens’ access to and use of information. Vietnam is carrying out this filtering with a notable lack of transparency — while Vietnam claims its blocking efforts are aimed at safeguarding the country against obscene or sexually explicit content, most of its filtering efforts are aimed at blocking sites with politically or religiously sensitive material that could undermine Vietnam’s one-party system.

A Vietnamese court hears the case against Dieu Cay

The government is ready to clamp down on the free flow of information online. Inspired by the eagerness with which western IT businesses have moved to work with Chinese censors, Vietnam expects to receive similar treatment. The AFP quotes the Thanh Nien daily newspaper’s report on December 5 that the information ministry planned to “contact Google and Yahoo about cooperating in the creation of the healthiest and best possible environment for bloggers.” It is now up to these companies to show some backbone and resist being transformed into agents for Vietnamese web censors.

Otherwise, Dieu Cay and the courageous Vietnamese bloggers who express themselves freely online will have an even harder time in a so-called “healthy environment,” sanitized of dissent.

Lucie Morillon is the Washington, DC, director of Reporters Without Borders, an international press freedom organization. She covers press freedom issues in the U.S. and abroad and is a spokesperson for the group. She also handles advocacy work with Congress and has appeared on CNN, ABC and has been quoted in the New York Times, Washington Post, and other publications. Reporters Without Borders strives to obtain the release of jailed journalists and cyber-dissidents and supports an independent media and the free flow of information online. Morillon is the free-speech correspondent for MediaShift.

3 responses to “Vietnam Cracks Down on Dissident Blogger Dieu Cay”