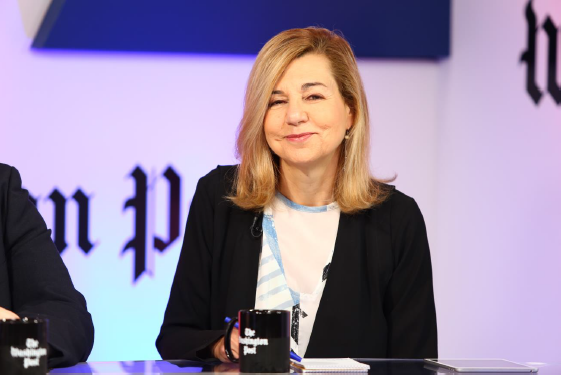 The Washington Post's media columnist Margaret Sullivan joins the MediaShift podcast to talk about platforms, the Florida shooting and why not every publication needs a ombudsperson. (Eric Hanson/Washington Post)

In the news this week, many publishers are pivoting to subscriptions as online advertising dries up. And Facebook is starting a Local News Subscription Accelerator to help metro daily newspapers. But can everyone succeed with subscriptions? Independent publisher LittleThings is closing, citing the Facebook algorithm change as the culprit. And publishers are kicking the tires on yet another slate of micropayment startups. Will the audience buy in this time? And the Washington Post’s media columnist Margaret Sullivan to discuss the spread of bots and misinformation on social media, and the problem with online discourse.

“It’s a drop in the bucket. When you think about the size and scope and revenues and profitability of Facebook, they could be doing more.” -- Margaret Sullivan on Facebook’s $3 million accelerator

Margaret Sullivan is media columnist for the Washington Post. Before joining the Post, she was the New York Times’ public editor, and previously the chief editor of the Buffalo News, She was a member of the Pulitzer Prize board from 2011 to 2012, and was twice elected as a director of the American Society of Newspaper Editors.

Why the ‘Pivot to Subscriptions’ is Flawed

One of the bright spots for news publishers over the last year has been subscriptions. We’ve told you about the “Trump bump” that publishers like the New York Times, Washington Post and ProPublica received last year. And The Atlantic and others have capitalized on their super fans by introducing membership programs for their most loyal readers. According to a recent survey by Reuters Institute, 44 percent of global publishing executives listed digital subscriptions as the most important revenue stream for 2018. But Digiday’s Lucia Moses warns that the new “pivot to subscriptions” might be going too far. Moses wrote that, “While it’s tempting to think reader revenue is the answer, the number of publishers that can pull off a scaled subscription business is likely to be small.”

Be that as it may, both Google and Facebook have been making moves to help publishers sell more subscriptions and memberships. Google switched to a flexible sampling policy last fall so publishers could set the number of free articles a user could view through the search engine. And earlier this month, Google revealed that it can help identify readers who would subscribe to a publication, and make it easier for them to subscribe. Not to be outdone, Facebook this week announced the launch of a $3 million, three-month Local News Subscription Accelerator, a pilot program to help local news publications ramp up their subscription efforts. The accelerator will work with about a dozen metro newspapers from around the U.S., including the Atlanta-Journal Constitution, Miami Herald and Newsday. Can the tech giants help boost publishers that are pivoting to subscriptions? Perhaps, but it’s a long, long road to getting users to pay consistently over the long haul.

When we first learned Facebook was going to change its algorithm to highlight posts from family and friends, the subtext was there’s going to be less content from publishers in our Facebook feeds. And with that change, we know some publishers that depend on Facebook would take big hits, just like what happened to Upworthy when Facebook changed its algorithm in 2013. And now the independent publication LittleThings says it’s shutting down due to a severe loss of traffic after the algorithm change. The site told Business Insider’s Mike Shields the change took out 75 percent of their organic traffic. LittleThings started out as a pet e-commerce site before shifting into feel-good news and service journalism.

In a company memo, chief executive Joe Speiser and president and COO Gretchen Tibbits wrote that they were exploring buyout options earlier this month before a quote “full on catastrophic update to Facebook’s algorithm took effect.” They say the future of the site is uncertain at this point. LittleThings targeted its content to women over 30 in middle America, and had a knack for riding the wave of Facebook’s changes. Tibbits said that, “For our audience, there’s not another platform right now. There are 100 great, talented people who were here and doing content that resonated with an audience that’s just harder to find right now.” But while many people are blaming Facebook’s algorithm change for hurting publishers like LittleThings, the real issue is with publishers who put all their eggs in the basket of a third-party site. Hopefully this will be a cautionary tale for publishers so they don’t repeat that mistake in the future.

Micropayments Get Another Round of Hype

The shining idea of micropayments for stories has been around since the dawn of the web, and a new group of startups comes to publishers every few years with the promise of a breakthrough. This time, the new startups on the block are Scroll, Invisibly and Brave, who have found a receptive audience among publishers. So why do publishers keep trying micropayments? As Digiday’s Max Willens writes, “The problems this new crop of companies are vowing to solve – ad-blocking, lousy user experience, low revenue per user – are intractable.” Therefore, micropayments are worth yet another spin.

One high-profile startup is Scroll, which will launch in the second half of this year. It will cost users $5 a month to access an ad-free version of content from MSNBC, The Atlantic, Slate and Fusion Media Group. That $5 will be split among publishers according to metrics like attention time. For users that want a simple subscription to all their favorite publications, this isn’t it. When you reach the free article limit on a paywall site like the New York Times, you will still get a paywall. What micropayment providers are hoping to counteract is the growing use of ad blockers. Currently, there hasn’t been an industry-wide consensus on how to deal with it. Some publishers will ask readers to whitelist them, some will block content until ad blockers are turned off, and others are turning to crypto-mining. Will this round of micropayment services really work? Maybe not, but publishers are going to try, and try again, to find an answer to declining ad revenues.

After the school shooting in Florida, journalists covering mass shootings created a Facebook Group for support.

Twitter launches Bookmarks, a private way to save tweets.

Viacom plans to launch its own streaming service to exploit thousands of hours of past programming.

And NBC Universal says it will cut ads by 10% during prime time shows.