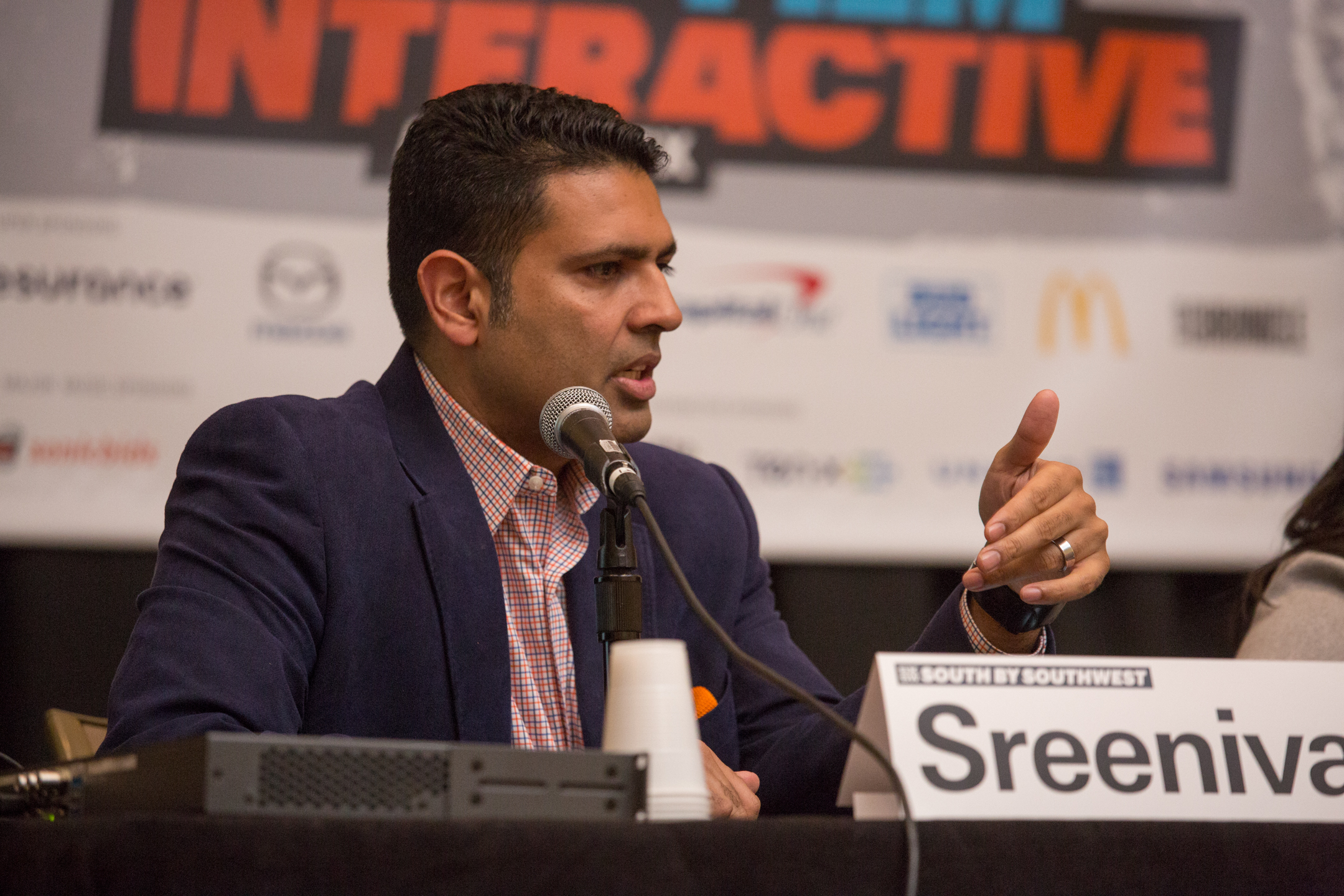 The NewsHour's Hari Sreenivasan joins the show to discuss what it means to be an anchor and journalist as misinformation grows and content becomes distributed.

In the news this week, Twitter bots and conspiracy theories abound after the school shooting in Florida, as one survivor is wrongly called out as a “crisis actor.” What can the social platforms do to stop misinformation? Vox Media says it will lay off 50 staffers, especially in social video, while The Atlantic plans to hire 100 people over the next year. Facebook advertising executive Rob Goldman is in hot water over his misleading tweets about Russian interference in the  U.S. election. Our Metric of the Week is Frequency, and Hari Sreenivasan, anchor of PBS NewsHour Weekend talks about the evolving role of the TV anchor and how he uses Facebook Live.

“One of the fundamental differences that I and perhaps a generation of people doing the job bring to it now is I am not the voice of God, I do not know everything. I believe firmly the crowd is smarter than me.” - Hari Sreenivasan

Hari Sreenivasan is anchor of PBS NewsHour Weekend and a senior correspondent for the nightly program. Prior to joining NewsHour, he worked at CBS News and ABC News, ran his own production company and freelanced as a reporter for KTVU in Oakland, California.

Unfortunately, we’re all too familiar with the media cycle that follows a  mass shooting like the one that happened in Florida last week. After the initial round of shock and sadness, there’s outrage and entrenchment. And, in what has become a disturbing trend, Russian-linked bots on Twitter immediately spring into action after a big breaking news event in the U.S. with divisive comments and hashtags. After the school shooting in Florida, bots on Twitter started popping up at hashtags #Parklandshooting, and later #ar15 and #NRA. It follows a pattern used by Russian bots during the 2016 election, and more recently in pushing the #releasethememo hashtag to get Congress to release the controversial memo by Rep. Devin Nunes. There were also fake tweets attributed to the Miami Herald’s Alex Harris asking for pictures of dead bodies and asking if the shooter was white.

Russian bots and alt-right figures also spread a conspiracy theory that an outspoken survivor, David Hogg, was actually an actor working for the FBI. The conspiracy theory gained further attention when Donald Trump Jr. liked two tweets about it. A related video became the top trending video on YouTube, while similar stories were in the trending news section on Facebook until Business Insider’s Steve Kovach brought it to their attention last Wednesday. Kovach noticed that in each case the algorithm was supposed to catch these kinds of misinformation, but failed, and while the tech companies have promised to add more human moderators, it hasn’t helped yet. The question is whether the tech platforms or U.S. government will take any meaningful action to stop the misinformation campaigns as they continue spreading after breaking news events.

It’s been a topsy-turvy world for media lately, and sometimes legacy media comes out ahead of the digital upstarts. As digital natives like BuzzFeed and Vice have struggled with ad revenues, Vox Media announced it would have to cut 50 jobs, especially among social video teams. Vox CEO Jim Bankoff explained in a memo that social video was “growing successfully” but “won’t be viable audience or revenue growth drivers for us relative to other investments.” The company is laying off staffers from Curbed, Racked, SB Nation and their video team. Another 12 employees will be offered positions elsewhere in the company. Racked, a shopping vertical, is particularly hard hit with both its native social video and native shopping programs getting cut. Undoubtedly, one of the issues for Vox and other digital publications has been Facebook’s News Feed changes, which now focus more on posts from friends and family.

Meanwhile, legacy media outlet The Atlantic announced it would hire up to 100 people over the next year, expanding coverage of Washington, Hollywood, Europe and technology. Helped by investment from Emerson Collective, run by Steve Jobs’ widow Laurene Powell Jobs, The Atlantic now has resources to grow and will hire more writers, editors, video producers, podcast producers and live event producers. The Atlantic will also bring in more people to its Talent Lab, an initiative to make sure its staff is diverse. According to Atlantic editor-in-chief Jeffrey Goldberg, “We are in a moment of national fracturing, and our expansion allows us to do a lot more of the kind of work that really is in our DNA.” It helps to have a billionaire owner for The Atlantic, but the same pressures will remain on being a sustainable business with profitability as a top priority.

A Facebook Exec is in Hot Water Over Tweetstorm About Russians

After the independent counsel, Robert Mueller, detailed how Russian actors manipulated the public via Facebook, an unexpected source gave his own commentary on the findings: Facebook VP of ads Rob Goldman. In a series of tweets, Goldman said he was “very excited” about the indictment and pointed out that the media hadn’t really reported that most of the ads ran on Facebook after the election. He also noted that Facebook will be taking steps to fight misleading ads, including a new postcard effort to verify ad buyers by snail mail. Facebook will mail ad buyers a code so they can prove that they’re in the U.S. before they can buy a political ad. But these will only be required for federal elections where a candidate is mentioned by name.

But Goldman was swiftly attacked on Twitter, and used by President Trump to declare that the “Fake News Media never fails.” The president referred to Goldman’s tweet claiming the Russian ad campaign’s main goal wasn’t to sway the election. This is directly at odds with the indictment of 13 Russians by special counsel Robert Mueller. Goldman later walked back that contention, writing that the Russian campaign was “in favor of Trump” and apologizing internally to others at Facebook. A New York Times fact-check by Sheera Frenkel found some other problems with Goldman’s contentions. While he defends Facebook around the Russians’ use of ads, they also used pages, groups and events on Facebook. In another tweet, Goldman touts “digital literacy and critical thinking” campaigns by Finland, Sweden and Holland as effective ways to fight disinformation. But while those countries have made efforts to promote digital literacy, they’re still grappling with misinformation. Seems like Facebook will have to update its social media rules for its own executives.