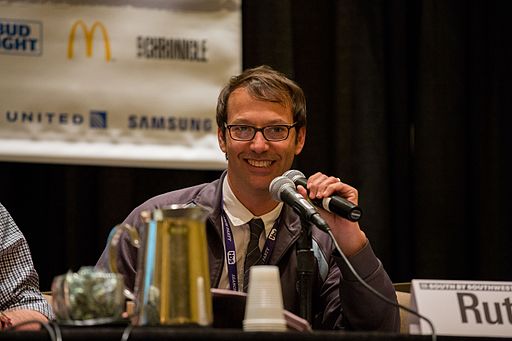 In the news this week, the Winter Olympics have seen lower TV ratings as expected, but NBC has made a big push into live-streaming and digital platforms to keep young people involved. Facebook said it would support publishers’ paywalls in its mobile app for the first time, and let them keep 100% of revenues. Will it turn around Facebook’s bad rap after its algorithm change? Apple News is bringing huge traffic to some publishers but is still struggling to drive ad revenues for them. Our Metric of the Week is Audience Impact, and the New York Times media columnist Jim Rutenberg stops by to discuss the recent highs and lows at the Times and his reporting on a porn star and President Trump.

“The idea that Rupert Murdoch was going to cut -- instead of his hunger to grow, grow, grow. The fact that he was cutting off the torso of his company, I still don’t think we’ve written enough about it and reported enough about it.” -- Jim Rutenberg on the streaming video arms race and Fox selling off its entertainment division.

As less Americans watch big live events on TV such as the Super Bowl and Oscars, the Winter Olympics is yet another victim of changing viewing habits. But NBC isn’t using traditional Nielsen ratings, but instead they’re touting TAD, which stands for Total Audience Delivery, a measure of viewership across network, cable and streaming platforms. And while they used TAD to measure Olympic ratings before in Rio, this marks the first time they’ve used the metric to sell advertising. So far, the TV ratings alone for NBC have been down 15 percent compared to Sochi but with TAD they’re only down 7 percent. But Comcast and NBC aren’t fretting the lower ratings, and are making a big push into social media and new platforms. After having dealt with the #NBCFail hashtag at previous Olympics, NBC is instead showing all events live, and live-streamed as well. By having so much video on social platforms, NBC can help offset lost TV audiences, and bring younger people into the action.

Plus NBC has partnered with two digital companies it has significant stakes in: Snapchat for live-streaming each day at the Olympics, with content produced by BuzzFeed. Plus, NBC is also experimenting with virtual reality and will provide special content for Uber riders. Meanwhile, news publishers have also ramped up their own innovative coverage of the Games. The New York Times is offering up the next best thing to being there: live, direct messages from editor Sam Manchester. Manchester is reporting on the ground at the Olympics and sending photos, videos and more to readers via the New York Times app. The experience is designed to be interactive so that readers can ask Manchester questions and even suggest which events to cover. For its part, the Washington Post fired up its “Post Oly Bot” on Twitter to provide regular updates of the Games. So even if TV viewership is down for this Winter Games, you can expect a lot of new experiences and social viewing to keep people engaged.

While Facebook has largely been the purveyor of bad news for publishers with its algorithm change, it did have a couple items of good news this week. The social giant announced that it would add a new section for news in its video feature Watch. And beginning March 1st, publishers will be able to use paywalls within Facebook’s mobile app for the first time. Facebook will allow readers to see five free articles from a publisher before loading a subscription page on the publisher’s website, rather than within Instant Articles. Publishers will also be able to keep 100% of the subscription revenue and the customer data. While Facebook had developed a work-around on Android apps, it took a hard-nosed negotiation with Apple to remove Apple’s 30% tax from paywall transactions.

Apple News Brings Traffic, But What About Revenues?

Apple News doesn’t get the hype and usage statistics that Facebook does but according to Tom Dotan at The Information, the app can account for as much as 60 percent of readership of some stories. The app is curated by a team of a dozen former journalists who decide which stories get featured in the Top Stories or Spotlight sections of Apple News. They run a private Slack channel with top publishers who make their pitch to score the coveted featured spots in the app and home screen. Small and medium-sized publishers aren’t too happy with the situation, however, as the curators tend to favor larger mainstream outlets.

But mainstream outlets have their own issues with Apple News. Digiday’s Sahil Patel reports that ABC News, which is seeing growth on the app, wants more personalization options for push notifications. ABC News is seeing referral traffic grow by double-digit percentages each month, but publishers don’t earn significant ad revenue through the app because Apple outsourced ad sales to NBC. Apple is reportedly working on supporting DoubleClick for ads, but it better move a little more quickly on that front. Longtime news reader app Flipboard has a big head start, and its CEO Mike McCue told the crowd at Code Media that Apple News “as a product is living in the past.” He touts Flipboard’s ability to drive traffic to publishers directly and increase social sharing. Apple has an amazing advantage with its app on every iPad and iPhone home screen, but it needs to put more energy into updating it and start supporting smaller publishers.

The New York Times’ podcast The Daily is so popular they’re distributing it to public radio through American Public Media.

Salon.com is offering readers with ad blockers a choice: turn off your ad blocker for the site or allow them to use your computer for crypto-mining.

YouTube TV added Turner networks including TBS, TNT and CNN and will now charge $40 a month, up $5.

And big-time TV producer Ryan Murphy, who created “Glee” and “American Horror Story,” was snatched up by Netflix from Fox in a reported $300 million deal.