How the OU Daily Transformed into a Digital-First Newsroom

by Dana Branham and Seth Prince 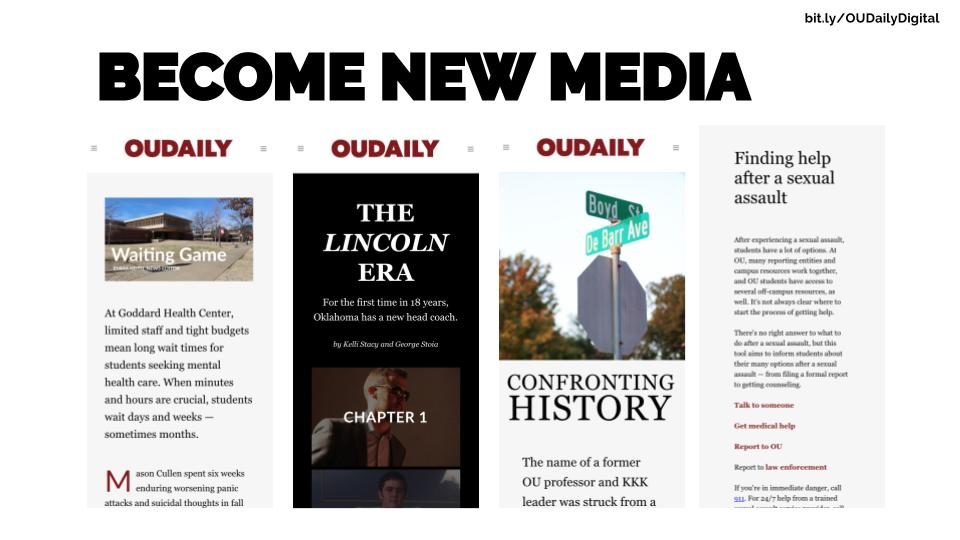 The need to transition college media to a digital-first mindset has been recognized as nearly ubiquitous, yet it’s far from easy. At the University of Oklahoma, adviser Seth Prince and former enterprise editor Dana Branham knew the pivot was essential, and below, they share a conversation, images and ideals that guided the OU Daily’s innovative journey to digital.

Dana Branham: When I got to The Daily, we published five days a week in print, and that was our focus. Now, we’ve dramatically changed the way we think about our work, and we’re truly a digital news operation.

"It’s been so rewarding to look back at what The Daily used to be and just be blown away with how far we’ve come." -Dana Branham, former OU Daily enterprise editor

Seth Prince: I’d been through something similar to this at The Oregonian. It’s tough, of course, but it’s doable. The particularly heartening part, I’d say, is that it’s an easier process in more nimble newsrooms like those we commonly have in college media, where students are already more digitally inclined and less rooted in tradition for tradition’s sake. However, here are some of the things that were holding us back.

Branham: We knew we needed to move past being bound to print, but we still had certain obligations to the way we always did things that made it hard to move full speed ahead.

Prince: So, first, here’s how we used to look online and in print.

Prince: This next sentiment has helped us orient people around the necessity of change. We, as a group, tried to free ourselves from fear of letting go of what was and instead embrace an experimental mindset. The goal, across that process, has been to grow an audience — who reads or views our work, who wants to buy advertising around that work — and generally to create something of real and measurable value for our community.

Prince: And this is where we are, all glow’d up.

How OU Daily Started the Change

Prince: This question above was front of mind throughout. My old boss said it to me early in my career, and I’ve said it to students endlessly. I hoped the idea behind it helped them feel liberated to experiment by setting some goal for what that experiment would produce.

Prince: OK, here it is in one slide. Now we’ll go a bit deeper on some of these steps.

Prince: There’s this article I tell students about from time to time about a running phenom named Mary Cain and the idea of the progressive-overload principle.

Branham: Seth sent me this article sometime during the spring of my freshman year, and I remember reading it in my dorm and being like, “Whoa, I do not run and I don’t know how this applies to me, but I feel inspired.”

Digital in the Crucible of Breaking News

Prince: We had a series of escalating news events that first year that allowed us to practice progressive-overload and have students see the discoveries they could make. First, a student killed his whole family. Then, a rock star got really mad at us. And finally, a racist fraternity chant became national news.

Branham: It was the first time I remember that we truly treated news as incremental — we broke the story on a Sunday night, wrote updates literally through the night (Seth can attest to a 3 a.m. GroupMe conversation about a star football player’s Snapchat rant), and ran a live blog and live video streams of how things unfolded that following Monday, breaking out separate posts when the news merited it.

Prince: Beyond the students learning they could, in fact, own a huge national story, another cool discovery came about. They had no time to think about print. Editors naturally separated themselves in terms of digital-focused workflows and — this was key — we still had plenty to make terrific print editions.

Branham: Then the best part of my career at The Daily happened: I signed everyone up for Slack.

Branham: Seriously though, Slack was a game-changer for us in the way we handled breaking news. We had all the right people in one place, could get in touch easily and quickly on all of our devices, and in breaking news situations, we had channels set up for just editors, just the news staff, the entire staff, and so on. It became a place for us to yes, share fantastic GIFs, but also to have real-time ethical debates and talk through our values even when we weren’t all together in the newsroom.

Resizing, Rethinking the Purpose of Print

Branham: Daily staff had wanted to cut down on print days since I joined as a freshman, and my sophomore year, we got the OK to move down to two days a week. We’d promised the student body, the pub board and alumni that they’d be seeing a dramatically different Daily, not just the same one they were used to but less.

‘Legos Not Bricks’: Innovating Through Engagement

Branham: I think some of our best digital strides have been thanks to the addition of an engagement desk and an enterprise desk. We started with the engagement desk — I was its first editor my sophomore year, which was great. We learned to be better listeners, more tuned in to the OU community, which made our coverage smarter and more reflective.

We started 9 a.m. Slack meetings — those have evolved from a conversation about what people around campus were talking about and how we could make sure our daily coverage was reflective of that — to now, where we workshop smart SEO headlines as a group. We thought hard about how to get news to OU students in a way they’d want to read it, which means we’re not bound to writing traditional stories, and we’re better for it.

Prince: Shortly after taking this job, I went to ONA14 in Chicago. It was on the heels of the NYT Innovation report, and one of my favorite quotes from that was, “We have to build the newsroom out of legos, not bricks.” That thinking informed a lot of the spirit behind these moves — formally creating engagement as part of the operation and trying to find a digitally sustainable version of enterprise.

Regarding enterprise, in particular… It happened in three drawn-out phases. First, we kind of broke some bad habits through understanding via metrics that readership was poor when we did things certain ways. Then we took on more of a producer mentality where we went harder and faster online. As that grew audience, we then came back around and began to more consistently build in enterprise work that originated online.

Also, we wanted to Snow Fall (an online design concept that originated with The New York Times) but didn’t know how from a presentation standpoint, and we had to quit building our best stuff for print. That led us to find a partner on campus, Adam Croom, a former Daily student who now works as the director of digital learning at OU, to help go back and reimagine how one of our best enterprise stories could be presented. Dana and I sent him the pieces and a rough concept we had in mind and asked him to just run with it. He came back, wowed Dana and I with what he’d dreamed up, and we swiftly called a meeting of the editorial board to show them where we could go next. I remember seeing face after face light up at the thought of their best work being presented in more compelling, immersive ways.

Months later, we launched our projects site on WordPress and dropped our first attempt at Snow Fall, on wait times to see a mental health professional at our campus health clinic.

As the newsroom began to find a rhythm of getting projects published in that space, we circled back and redesigned our main website — run on TownNews’ CMS — for the second time in three years.

Focus on Addressing the Audience

Branham: This part feels pretty simple once you’ve added up all the other parts: we’re trying to take advantage of big news moments while consistently growing our core audience. For us, that means OU students, faculty, staff, alumni as well as people who live in and around Norman, Okla.

Prince: One other detail here: knowing how vital social is to our success, we’ve not let that grow organically. We have made a conscious effort to go into certain platforms and especially with certain stories to invite people who liked one piece to come back to get our coverage more regularly.

Prince: These past few years have been some of the most fun I’ve ever had in journalism. Not because of where we wound up, or whether we can stay at this peak. But because of all the people and energy and enthusiasm that contributed to getting here. Because of what we learned in the process, both for The Daily and its audience. And most important, because of what our students walk away with as they go forward in their careers and remember these moments and what went into making them happen.

Branham: It’s been so rewarding to look back at what The Daily used to be and just be blown away with how far we’ve come. The things we’re trying now are things I never could’ve imagined when I started here. I hope y’all are able to have those moments — where you just look back and think, ‘wow’ — then keep pressing on.

Dana Branham concluded her career at the OU Daily and started in January as a one-year breaking news intern at the Dallas Morning News. She’s previously interned at the Tulsa World and the Cincinnati Enquirer.

Seth Prince is the digital adviser at the OU Daily. Now in his fourth year at the University of Oklahoma, Prince is working in the newsroom he started in as a college student years ago. In between, he spent 14 years at The Oregonian in a variety of roles, from copy editor to sports editor.