How Philanthropy and the Media Could Work Better Together 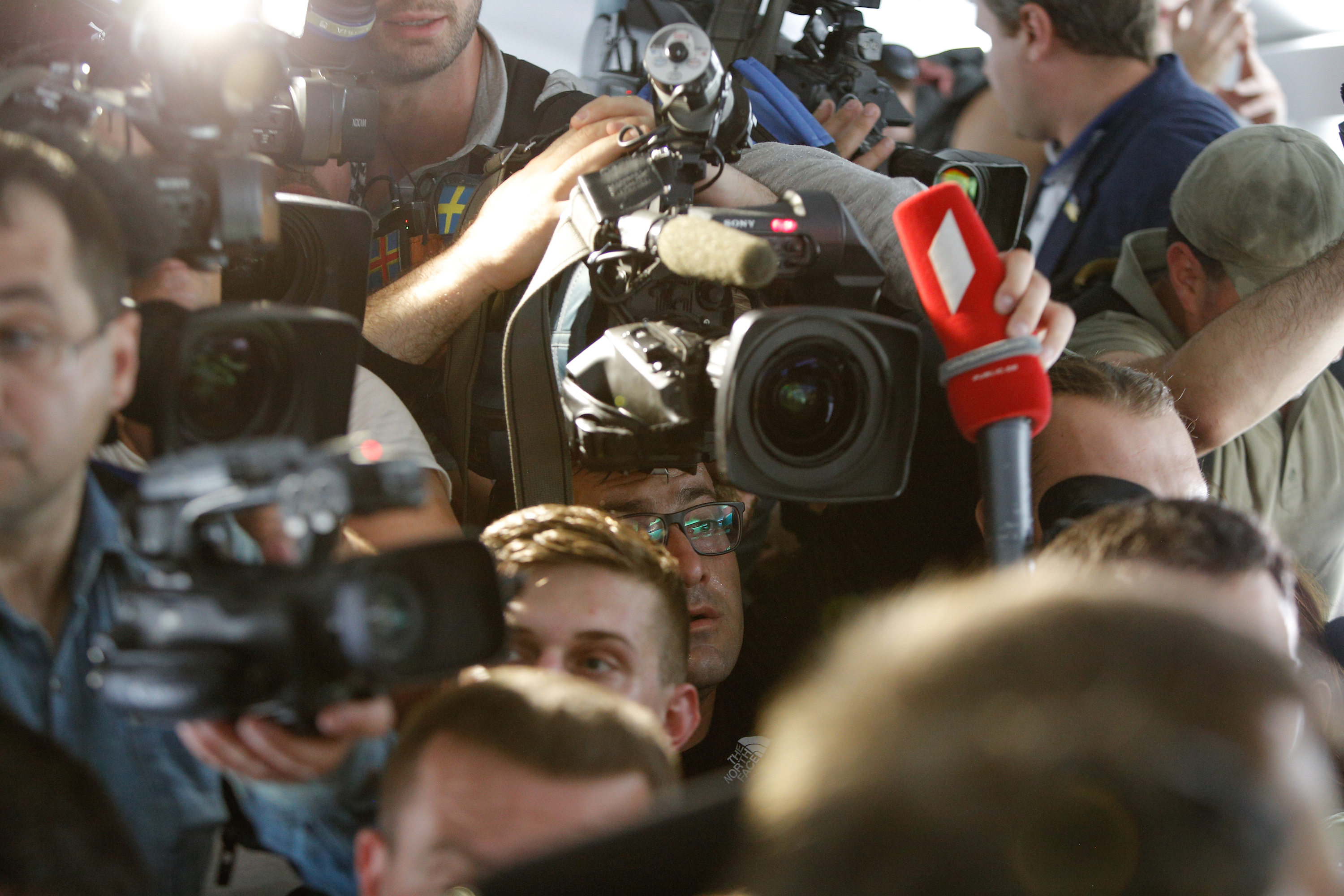 Journalists on a train to Lviv at Przemysl train station on 10 September, 2017 filming former president of Georgia Mikheil Saakashvili. (Photo by Jaap Arriens/NurPhoto)

A version of this piece originally appeared at Alliance Magazine.

Why are the worlds of philanthropy and the media still so far apart? What could and should be done to bring them together and realize the promise of a reciprocal relationship?

"Philanthropy needs to step up and understand that first, without functioning media, civil society collapses; secondly, our aspirational goals can be achieved better by working with the media."

Now, more than ever, philanthropy and the media don’t just need to work more effectively together, they actually need each other to fulfill their respective missions.

Philanthropy and the media are well defined terms. Philanthropy is roughly the promotion of the welfare of others using money towards causes in the public interest. The media refers to the main means of communicating to audiences, in this case, principally the transmission of news and information.

Yet today, the definition of both philanthropy and media are being stretched.

For example, is the purchase of the Washington Post by Amazon founder Jeff Bezos an exercise in philanthropy?

For most people, it would be a clear no. However, it did save the publication from vanishing. Is the acquisition of a dominating stake in The Atlantic by Laurene Powell Jobs and her company, the Emerson Collective, an act of philanthropy? They argue it is.

Meanwhile, journalism today has many different faces and is delivered by many different types of organizations. Consider constructive journalism, as defined by Ulrik Haagerup at The Constructive Institute and solutions-oriented journalism by Tina Rosenberg and David Bornstein in their NYT column Fixes; consider journalism as a public and community service as defined by Jeff Jarvis and others at the City University of New York. News provision and storytelling is now, as much as ever before, committed to the betterment of the audiences it serves.

Something old, something new

But this is not new. Ralph Waldo Emerson, a co-founder of The Atlantic 160 years ago, established the mission of the organization as to ‘bring about equality for all people’, an ideal cited by Powell Jobs in her acquisition of The Atlantic.

But the context has changed.

Political and social events happening across the world over the last two years have shaken our world. As Bruce Sievers and Patrice Schneider argue, “civil society’s information base, its norms and its operating mechanisms’ are under attack, presenting ‘an existential threat to democracy.”

Two years ago, these arguments would have been different: consider today what both journalism and philanthropy need to contend with: hundreds of websites routinely spread misinformation and automated accounts known as ‘social bots’ are being programmed to spread fake news.

Political processes have been damaged such as the peace accord referendum in Colombia, and elections in the Netherlands, France, and the US.

Meanwhile, media manipulation is contributing to the shrinking of Eastern Europe’s democratic space, the fomenting of the far right in Germany, as well as fuelling conflict in Syria, Yemen, Myanmar, Turkey, and shocks such as Brexit or the constitutional crisis in Spain.

All of these events are heavily influenced by cyber-politics operating in real time, with real-time analytics, including social listening – the process of monitoring digital conversations to understand what individuals are saying about a topic.

Regrettably, neither philanthropy nor the media have been ready or able to combat these sophisticated tools. At least, not yet.

Why did we not see it coming and prepare more for it? Should the priorities of philanthropists and their foundations, and the public conversation and discourse shaped by the media, have changed more quickly in response to major shifts in the political landscape?

In the U.S. for example, the prototype fund run by the Knight Foundation, the News Integrity Initiative, funded by Facebook and run by CUNY, is reinvigorating a taste for media literacy and giving new impetus to fact-checking initiatives.

In Europe, a response has come from European institutions and some governments, notably Germany.

In truth, this latest political upheaval across the world has brought to light not just how unprepared philanthropies were, how reactive, how little we knew about these possible scenarios. But journalism was also taken by surprise. We, philanthropies, we, the journalists, weren’t curious enough.

The current media environment is not good news for anyone in civil society, and that includes philanthropy. The information base of democracy, its norms and its operating mechanisms are “threatened by a storm that takes everything on its path,” as Sievers and Schneider describe.

What should philanthropy do?

As James Deane highlights, philanthropy has come to the “sudden recognition of just how much independent media mattered and just how weakened democracies had become by misinformation and disinformation.”

Philanthropic funding of media needs to address what Sievers and Schneider consider fundamental to overcoming the most immediate threat today, “the decline of civic media and the resulting deterioration of public discourse” as a prerequisite for a functioning civil society.

Philanthropy has made possible numerous independent news providers in places where the flow of information is challenging, like MalaysiaKini in Malaysia, most non-for-profit investigative reporting around the world, such as IDL-Reporteros in Peru, and even the organizations behind the coordination of the Panama Papers investigation, among many others.

However, philanthropies are pushed and push themselves in many directions. There are many urgent social needs, beyond confronting failing trust and growing misinformation. For example, foundations play important roles in funding media to maintain and deepen coverage of particular causes such as climate change, resilience and urbanization, global health, and humanitarian assistance, among many others.

In media, the story is the commodity and trust is the currency

Yet, the media has gone through a massive transformation over the last decade, impacted by three distinct trends. First, the technological revolution has made us question most of our assumptions about what a media system looks like, how it is created, what it does, and to what effect.

Second, and more importantly, financial realities meant that the media industry’s survival took precedence over its mission to provide a service to society.

The third crisis faced by the media is a decline of its credibility. A 2017 survey for the Reuters Institute’s Digital News Project showed that trust in media in the UK fell by 7 per cent compared to 2016. Meanwhile, Edelman’s annual report on trust found declines in public trust in the institutions of government, business, media and NGOs around the world, with the greatest drop for media.

But not everyone is pessimistic. Barbara Hans, for example, writes about a real opportunity for media to “return to its true function in society and its vital role in democracy.” While media may be reeling, what is not dying is the authority and influence it exerts. It signals what is important to the public and what the public should be paying attention to, and is a mechanism that policymakers feel they need to respond to in order to retain legitimacy.

Time to pay more attention to audiences and impact

Journalism matters, but the question that philanthropy asks is, what journalism matters most? As media consumers we have access to more and better content that we can ever digest in many lifetimes; the problem media faces is how to inform, engage, target, and influence the right audiences.

The media needs a transformational purpose. Parallel to the crises of media, but completely related, the media still needs to repurpose itself, a service, to become news that can be used.

Journalism now comes in many different shapes, but also new models emerge, such as The Conversation, investigative newsroom ProPublica, and mega collaboration projects such as the International Consortium of Investigative Journalism, among many other variations. However, the goals remain the same: to positively affect the societies they serve.

Philanthropy is not the answer to sustainability

The trap would be to believe that philanthropy is the answer to sustainability. It is not and it must not be. As journalist Gustavo Gorriti notes, “There is a great disparity between the consensus on the importance of free, investigative journalism for the health of democracy and the very small percentage of philanthropy allotted to support it.”

Entire sectors of philanthropy, such as social investment and impact investment, don’t yet have it on their radar, with a few notable exceptions.

Media needs to welcome change, embrace its obligations and help in delivering social change. It needs to do a better job at demonstrating value, evidencing why media matters.

When working with philanthropies, there must be mission alignment, not just an added revenue model, otherwise the partnership model doesn’t work.

For its part, philanthropy needs to step up and understand that first, without functioning media, civil society collapses; secondly, our aspirational goals can be achieved better by working with the media.

Most of all, we need to remind ourselves of the many moments when journalism really mattered.  A spirit of enquiry isn’t an option – it’s a necessity.