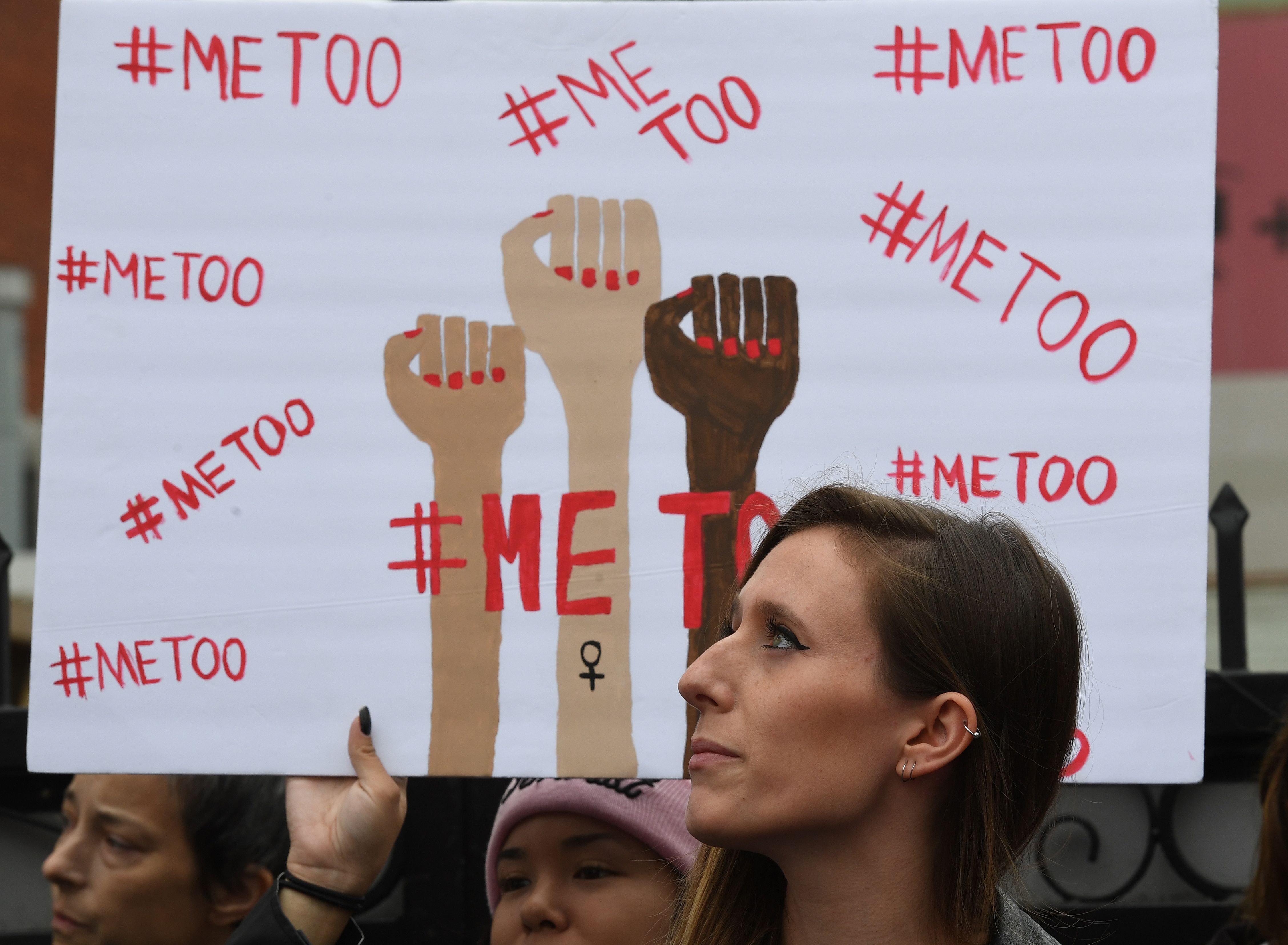 Protesters at a #MeToo march gathered in front of the Dolby Theatre in Hollywood before marching to the CNN building to hold a rally on November 12, 2017. (MARK RALSTON/AFP/Getty Images)

The #MeToo movement is a cultural wildfire. This can be seen in millions of social media mentions and on the cover of Time magazine, which named “The Silence Breakers” 2017’s Person of The Year. Across industries – from tech and entertainment to politics and sports – women are coming forward to reveal their stories of sexual misconduct that run the gamut from creepy comments and unwanted hugs to assault and rape. The media industry has certainly not gone unscathed. We’ve witnessed many of our most prominent figures named in these revelations, which has led to a slew of dismissals and raises serious issues that we cannot afford to ignore.

"The challenge is to do more than treat our industry’s superficial burns. We need to look deep and act decisively to stamp out systemic sexism."

The scope of these inappropriate and predatory behaviors is mind-boggling. And the implications, which include personal trauma and professional repercussions, will continue to unfold for a long time to come. Already, the potential for a multitude of effects is being examined. In the media industry in particular, we must consider the impact that these high-profile male journalists have had on shaping the news itself and what that means for an industry that already suffers from a lack of diversity in journalists and viewpoints.

An issue of perspective

As Jill Filipovic wrote in The New York Times, “Sexual harassment, and the sexism it’s predicated on, involves more than the harassers and the harassed; when the harassers are men with loud microphones, their private misogyny has wide-reaching public consequences.” So not only must the media industry take an unrelenting inventory of individual and institutional sexism, we must also account for its larger societal impact.

Filipovic draws an explicit connection between the fact that several male journalists who have been accused of sexual harassment – Matt Lauer, Mark Halperin, and Charlie Rose – were at the forefront of covering the presidential race between Hillary Clinton and Donald Trump. In the election results and our President’s tweets, words, and actions we see the effect that a media boys club has had on the news narrative.

As Rebecca Traister wrote in New York Magazine “Our National Narratives Are Still Being Shaped by Lecherous, Powerful Men.” So as our industry covers its own #MeToo moments, we must look deeper and work harder not just to address the problem of these harassers and abusers, but also to reshape our teams and coverage to better reflect gender parity and broader issues of diversity.

We are left to wonder at the impact of a misogyny bias on the 2016 presidential election. We know for certain that it was impacted by a coastal media bias, which sorely affected candidate coverage and revealed a fundamental lack of understanding for large swaths of American voters. At least in part, this can be attributed to the realities of publishing today. As Politico pointed out, the decline of local newspapers has led to a rise in web-based news coverage. And, where newspaper jobs are distributed nationwide, internet jobs (and digital-only media outlets) are concentrated on the coasts. However, Politico sees an opportunity in recognizing media bias and blind spots and better reflecting diverse perspectives.

Unfortunately, Mizell Stewart, president of ASNE and vice president of news operations at the USA Today Network, told Columbia Journalism Review that data from ASNE surveys showed local newsroom leaders were “much more focused on keeping the lights on and moving their news organizations towards the future. Diversity definitely took a backseat.” Yet as we reflect on 2017 and look forward to a New Year, we need to make the connection between #MeToo, diversity, and the future of media.

An opportunity for diversity

USC Annenberg’s Media Impact Project study just released a study entitled “Media’s Gender Gap: Investigating relationships between women’s news production and consumption.” Unsurprisingly, it confirmed that women are underrepresented in newsrooms. Significantly, though, the report also found that news organizations with a higher share of women writing the news and in leadership positions boast a higher share of women in their audience. The report’s author, Alyssa Zeisler, who is an engagement strategist at the Financial Times, went on to draw the conclusion that employing women in these roles would likely lead to a more informed and engaged public and would also offer revenue opportunities for media companies through audience growth.

The HuffPost is one media organization that sees both the risk and opportunity at stake in the media’s failure to reflect the many faces of the American people. This year, it set out on a 25-city tour to hear concerns from people across the nation in order to better reflect these issues in its coverage. HuffPost editor-in-chief Lydia Polgreen says that she also plans to use the tour to inform future hiring decisions. This will be a significant factor as the digital publication seeks to fill some of the void left by the demise of so many metro papers.

Lydia Polgreen, Editor-In-Chief of The Huffington Post, at the 2017 MAKERS Conference. Polgreen is actively seeking to reflect more diverse voices at HuffPo. (Photo by Emma McIntyre/Getty Images for AOL)

Another sign of hope is the formation of a new Commission on Sexual Harassment and Advancing Equality in the Workplace, which will chaired by Anita Hill. The commission – backed by entertainment, music, and media executives – intends to combat sexual misconduct and inequality in the industry.

The fire this time

So-called hashtag activism has a notoriously short lifespan. However, since actress Alyssa Milano lit a fire under #MeToo in October, it has showed little signs of slowing. #MeToo appeared in more than 500,000 tweets and 12 million Facebook posts within its first 24 hours. By mid-December, it had been tweeted over 2.3 million times in 85 countries and shared in over 77 million posts or comments on Facebook.

The challenge is to do more than treat our industry’s superficial burns. We need to look deep and act decisively to stamp out systemic sexism. And then we need to figure out how this #MeToo moment can help us better reflect and serve all of our audiences. This is certainly our responsibility. It is also an opportunity. Let’s take this moment, this movement, and chart a better path forward that will lead to journalism that more Americans will consume, trust, and maybe even pay for.

Michelle Manafy is editorial director at Digital Content Next. More than half of her journalism career has been focused on covering the business of digital content. She has held leadership roles at the Media Industry Newsletter (min); UK-based digital publisher FreePint Limited; and Information Today, Inc.’s Enterprise Group.