How High School Journalists are Innovating with Podcasts, 360 Video and More 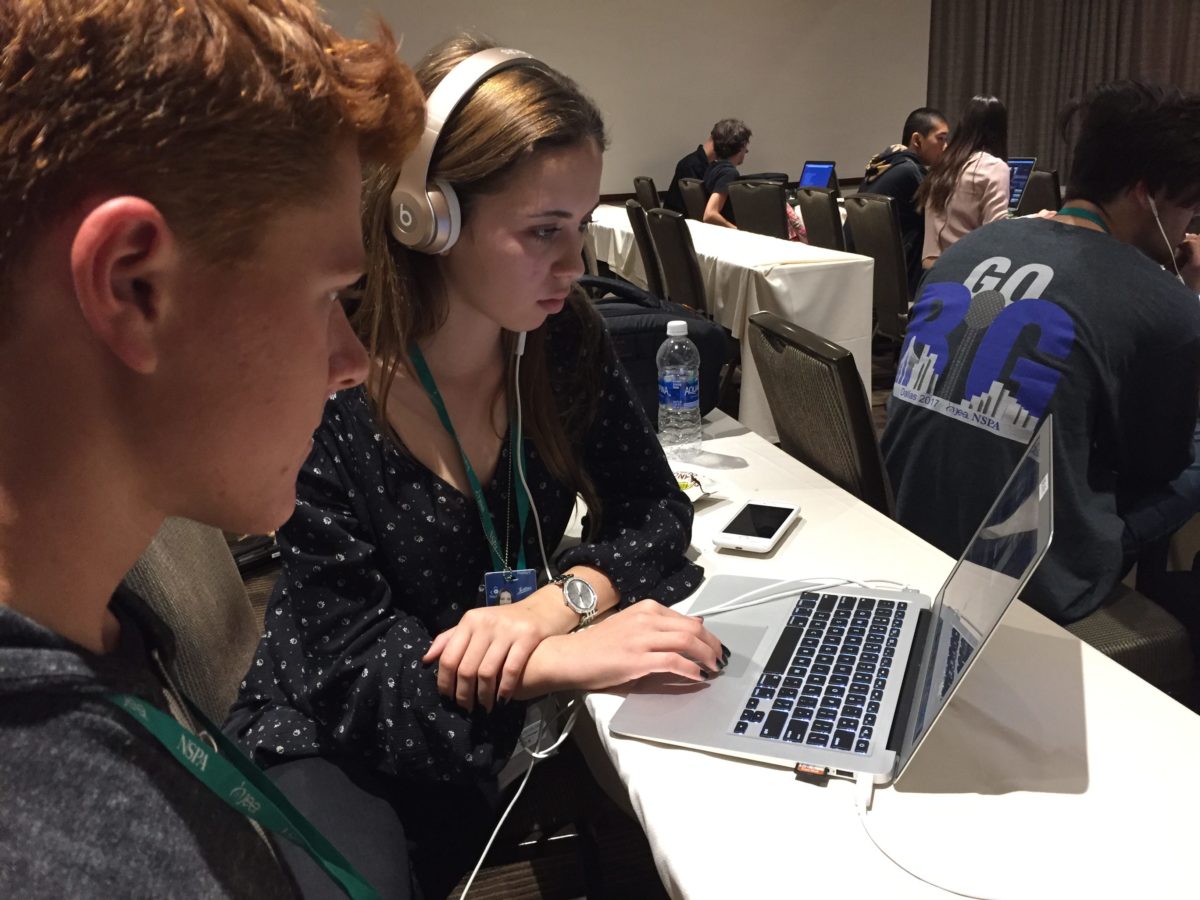 Hands-on workshops and competitions gave students at the NHSJC a chance to hone their multimedia journalism skills. (Photo: Michael Hernandez)

“We are in the midst of growing an innovative culture of citizens,” Rittenour High School (St. Louis, Mo.) journalism adviser Jane Bannester said.  “We need to prepare our future journalists by giving them the basics of good storytelling, but also help them to be flexible with how they send that message.”

JEA President Sarah Nichols said integrating technology, one of the chief forms of innovation today, can be daunting for some high school advisers.

“It requires a certain level of flexibility, trust and willingness to fail — all while helping students work within their deadline schedule and budget constraints,” Nichols said.

That’s why high school students from 44 states, as well as countries such as China, Canada and the UK, took the opportunity to participate in seminars and hands-on learning during the JEA/NSPA convention, so they could engage with innovative ideas to drive the direction of their schools’ publications.

From ethics to social media, advisers and professional journalists conducted sessions addressing yearbook and print publications, as well as those about more contemporary issues. Wade Goodwyn of NPR, for example, led a session on “Reporting in the Age of Trump,” a lively discussion about how to be a journalist when the profession is increasingly distrusted, as well as physically and digitally attacked. Doualy Xaykaothao of Minnesota Public Radio spoke about reporting on communities that are different from your own. Her session, “Race and Identity Reporting,” gave practical advice for students hoping to cover marginalized groups and taboo subjects.

Podcasts, 360 video and tools for the future

The convention’s sessions on technology in journalism included how to produce a video version of Humans of New York and several presentations about podcasting — all geared toward high school media staffs.

Podcast listenership has increased by 23 percent per year according to recent studies, with the largest audience being 18- to 25-year-olds. Bannester led two sessions on podcasting to address this demand, including a hands-on production session.

“You can’t ignore any medium in your industry that is popular,” she said. “It would be negligent of us if we didn’t prepare [our students] for a future newsroom or profession that is never static, and to use tools we may not have even considered before.”

When it sent 300,000 subscribers a Google Cardboard last year, The New York Times put a stake in the ground supporting multimedia. Its NYTimes VR app publishes 360-degree video from reporters around the world.

“Digital tools allow us to tell a story in the most appropriate way, whether that’s through data visualization, immersive photography and video, long-form writing, mapping, aerial footage or augmented reality,” Furnas said.  “Being able to critically think about storytelling methods is incredibly exciting as an educator and journalist, but also immensely rewarding for the audience.”

While most sessions were presentations, there were a number of hands-on and interactive opportunities for participants as well. Pre-Convention sessions included topics such as team storytelling and investigative reporting. Training with Adobe Photoshop, Illustrator and In-Design software were also popular.

Writing Onsite and On Deadline

Some of the more exciting interactive experiences for students were the onsite competitions known as “write-offs.” While many of these contests focused on news writing and layout, recent additions to the contests included categories for broadcast journalism, social media and online news reporting.

The Online News Package contest challenged a team of students to cover a topic using a variety of digital media. This year’s prompt was the New Voices Initiative, a proposal for states to pass laws protecting high school journalists and their advisers.

Contestants had six hours to research, write, produce and publish content around the topic to their publication’s website.

The student team from Beverly Hills (California) High School was one of the top performers, and their submission earned them a superior rating.

The final result of the Online News Package competition from Beverly Hills High School at NHSJC.

“We took everything we learned about multimedia and creating a package made up of different angles of the same thing,” senior Jason Harward said about his experience competing in the write-off.

The next bi-annual National High School Journalism Conventions will be in San Francisco on April 12-15, 2018, and in Chicago on Nov. 1-4, 2018. A summer Adviser Institute, a chance for teachers to learn new skills, is scheduled for Las Vegas July 9-12, 2018.

Michael Hernandez is a media arts teacher and consultant in Los Angeles whose work focuses on media literacy, social justice and innovation in education. He is an Apple Distinguished Educator, Google For Education Certified Innovator and PBS Digital Innovator. Find him on Twitter at @cinehead and www.michael-hernandez.net