How Students Covered a Conference Better with Multi-Platform, Multimedia Reporting 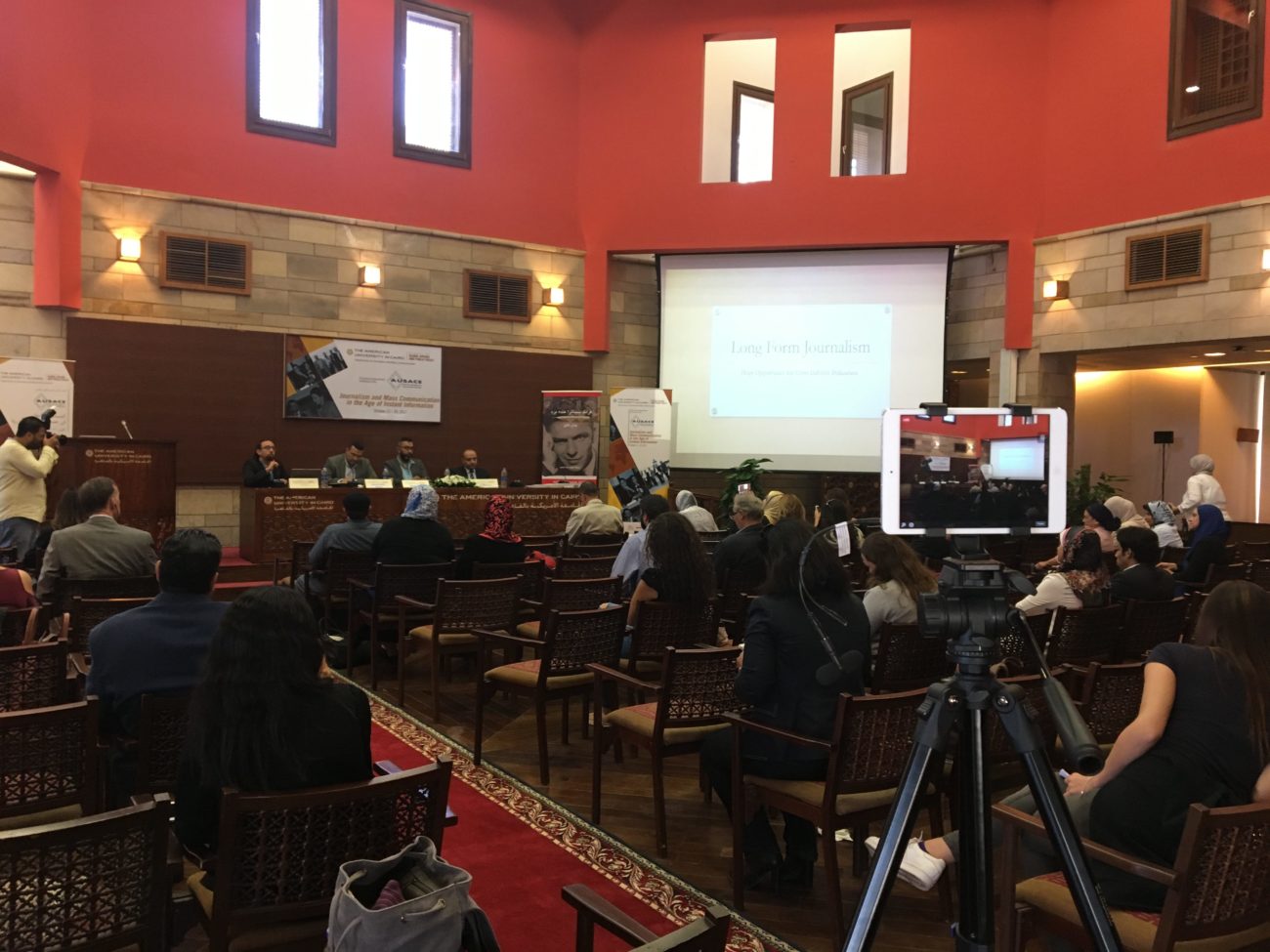 Students in a capstone course at The American University Cairo set up their Facebook Live stream during one of the sessions. (Photo: Kim Fox)

Eleven students at the American University in Cairo did more than just attend the 22nd annual conference of the Arab U.S. Association for Communication Educators (AUSACE) — they also used extensive planning and a variety of multimedia tools to cover it.

Under the theme “Journalism and Mass Communication in the Age of Instant Information,” the conference brought together academics, media practitioners, journalists and students who presented and discussed research on global digital journalism with a focus on the Arab region.

And the students in the AUC capstone course became a dynamic news team responsible for daily social media coverage in English and Arabic, in addition to producing a website that showcased the four-day event, allowing those involved to learn the importance of both planning and organization when tackling extended, multimedia journalism coverage.

Pre-Planning for the AUSACE Conference

We were able to prep for the conference more than a month prior to the actual event; therefore, we managed to have a clear plan of what was needed for complete media coverage both during the conference and in post-production.

As a part of our pre-production plan, we created an Excel sheet divided by day. Within each day, we included the session name, time and a column for the role of each student journalist, who were encouraged to tap into their personal skill set for coverage.

The daily coverage was then divided into four tasks that were combined into two areas for each session:

Using iMovie, we created a video template and sample storyboard for a consistent, branded look. The template included font size, type and placement, content within each frame and type of shot.

In the Heat of AUSACE Coverage

During the conference, the teaching assistants, in the role of assistant producers, ensured everything ran smoothly and assisted the students.

As part of the daily coverage, students live tweeted in both English and in Arabic, with many tweets consisting of videos or photos that highlighted the most important research outcomes from the papers and presentations in the conference. (Below, watch as Robb Montgomery shows students how to set up a shot.)

We had a Facebook Live stream each day from the JRMC AUSACE Facebook event page during the plenary sessions, including Montgomery’s keynote. FB Live was administered via the professors’ mobile device on a professional tripod with a portable mic, which picked up the speakers in the room.

After each conference day was over at approximately 5 p.m., many of the student journalists headed to the class lab to work on the recap of that day to be posted to FB, along with some photos later in the evening.

We used Shorthand Social to create the post-conference website because it proved to be a suitable online platform to complement the content. Additionally, it was free and had a simple layout for visuals and text. One caveat was that the free version did not allow embedding, like audio from SoundCloud.

Students work on coverage of the 22nd annual AUSACE Conference in the student newsroom in Cairo. (Photo: Kim Fox)

The articles on the website had in-text links to the social media accounts, databases, and online directories leading to background information about conference participants and organizers, including information from all conference days.

The primary takeaways for us were preparation and organization. You need a sizable student staff to provide ample conference coverage. In our preparation, we should have extended an offer to students in other courses to assist in the coverage in order to avoid saddling the capstone students with the heavy load of the coverage along with attending their usual classes.

Overall, we were pleased with the outcome of the team effort and all of the content produced as a result of the AUSACE Student Newsroom.