How Students Use ‘Service Learning’ to Cover Diverse Communities 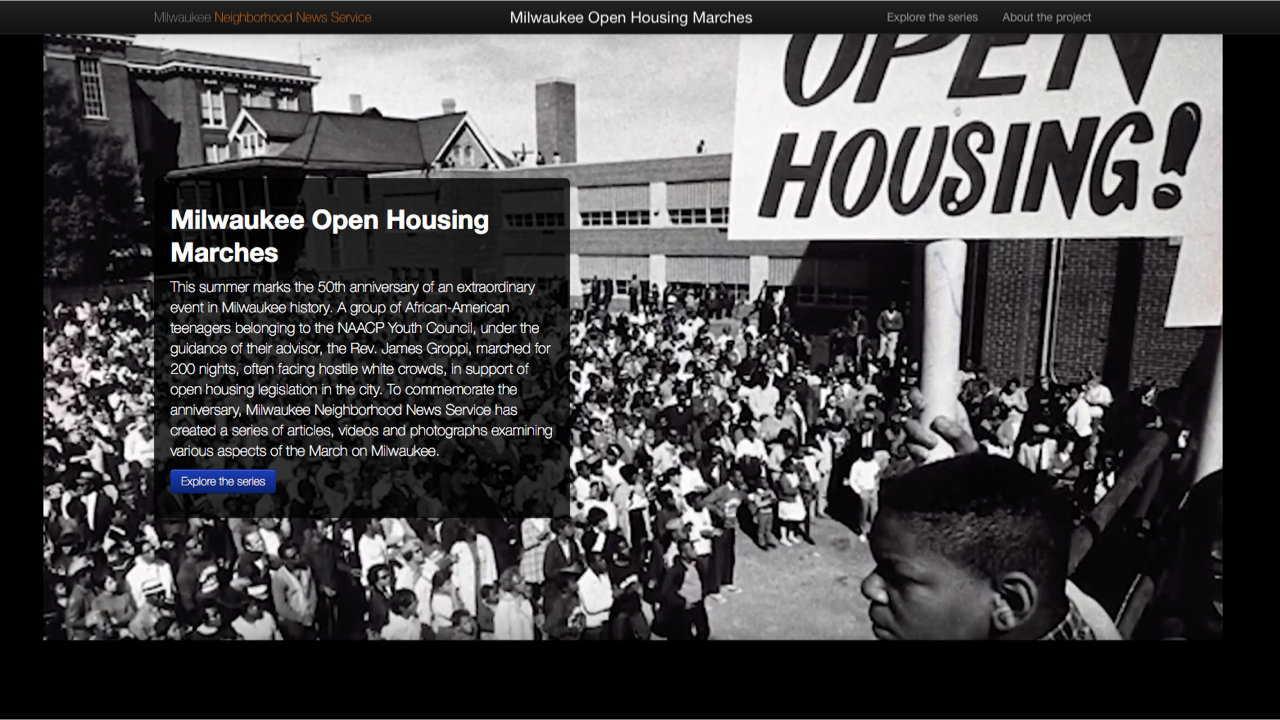 Dean Bibens, a junior at Marquette University, paired a compelling video interview with his story in which white residents recalled the fear and hatred that motivated counter-protests in Milwaukee in 1967.

A classmate, senior Julie Grace, matched a creative infographic with her story that found despite today’s diverse city council, Milwaukee’s leaders recognized there were issues, some originating in the 1960s, still to solve.

“This project was the biggest learning experience in my young journalism career,” one student wrote.

Journalism students from Marquette, like Bibens and Grace, produced 11 of the 15 multimedia packages in “Milwaukee Open Housing Marches,” which marked the 50th anniversary of a seminal moment for Wisconsin’s largest city. The Milwaukee Neighborhood News Service (NNS) published the two-month-long series examining the legacy of heroic efforts by black teenagers and a white priest to combat discrimination and segregation.

This work represented innovative, project-based service learning, as students mixed educational outcomes with authentic community service. This journalism also extended a partnership between classes at Marquette (a private, Jesuit institution) and the NNS, which is housed in the Diederich College of Communication and aims to provide a balanced picture of low-income neighborhoods in the nation’s 30th largest city.

In most cases, service learning focuses on community needs, and throughout several semesters, nearly 90 of my students ventured across Milwaukee – for NNS or our website – to produce multimedia stories about people working with nonprofits to improve communities. The rationale for this type of journalistic learning experience is that students will do their very best – and learn the most – if their work is meaningful to others and attracts an audience beyond their instructor and classmates.

During fall 2014, my class produced a microsite focusing on the 45th anniversary of Marquette’s Educational Opportunity Program, which exists to offer low-income, first-generation students greater access to higher education.

My next class partnered with a graduate school program about to celebrate its 15th year of developing leaders committed to social and economic justice. Each student spent weeks creating a story package about a program member. Several of those profiled attended the premiere of “Exploring Marquette’s Trinity Fellows Program” during the class’ final exam period.

During fall 2016, my class once again teamed with the news service. The 15 students each produced a text story and video about a 20-something difference-maker, resulting in “Millennials Make Their Mark on Milwaukee.” The following term, 17 students produced “Leadership in the Public Interest,” a collection of Q&As and videos about local nonprofit leaders.

These partnerships with NNS enabled students to interview individuals whom they would not have encountered on campus and work closely with a professional editor in addition to their instructor. They were held to the same high standards as the news service’s professional staff, which gave them a good idea of what a newsroom is like.

The projects also helped improve skills and professionalism, and they have paved the way for several students to become reporting and social media interns at the news service.

How Multimedia Service Learning is Implemented

NNS editor-in-chief Sharon McGowan (and/or her staff) and I conceived of what each semester-long news package would be. The students, most of whom have never experienced a journalism effort from conception to publication, spent the first part of the semester learning how to use equipment and software, as well as visual storytelling basics.

Whenever possible, they were tasked with identifying who they would profile, much like a typical news service staffer. What’s different from other journalism courses: Their assignment was not considered complete until published. They had to go through several edits, first by me and a college colleague with video expertise – and then McGowan, who is as exacting as any editor a student would encounter.

Each student reflected on his or her journey via course blog posts throughout the semester, culminating with the published outcome of their work.

“This project was the biggest learning experience in my young journalism career,” one student wrote. “I stepped out of my comfort zone to find fantastic stories about great people.”

Another student wrote: “If I learned one thing from this project, it is that a community is not created and nurtured by street signs or white picket fences. It is the dedication and love of people … that create a community.”

One more: “Not only has this been a great technical learning experience, but it has also given me a look into the fast-paced world of professional journalism and what it takes to be a successful journalist.”

The millennials and leadership series have together earned more than 16,000 unique page views for the NNS website. In addition, the packages produced by my class were often republished by other news outlets serving the city, a byproduct of our partnering with an online news service.

In some cases, McGowan noted, stories drew strong reaction from the community. For example, a package about a former inmate who founded an organization to fight discrimination against ex-offenders garnered an unusually high number of comments.

“More important than the benefit to (the news service), however, is the value of these stories to the community organizations that the students covered,” McGowan said. “Their work called attention to organizations that might have remained under the radar — informing people who needed the services, and attracting potential funders and volunteers. The partnership was a win-win-win for students, (the news service) and the community.”

Make no mistake, the students came away inspired by the project.

Though they were all journalism majors, many of these students were more likely to work for a nonprofit than in a newsroom after college. So, while going beyond lectures, software and equipment is certainly an emphasis, the intentional discomfort required to interact with people within communities and cultures different than their own was an essential aspect of this service learning.

Herbert Lowe was the journalism professional in residence at Marquette University, his alma mater, from 2010 until May. A former president of the National Association of Black Journalists, he is now a lecturer and director of the Summer Media Institute at the University of Florida’s College of Journalism and Communications.