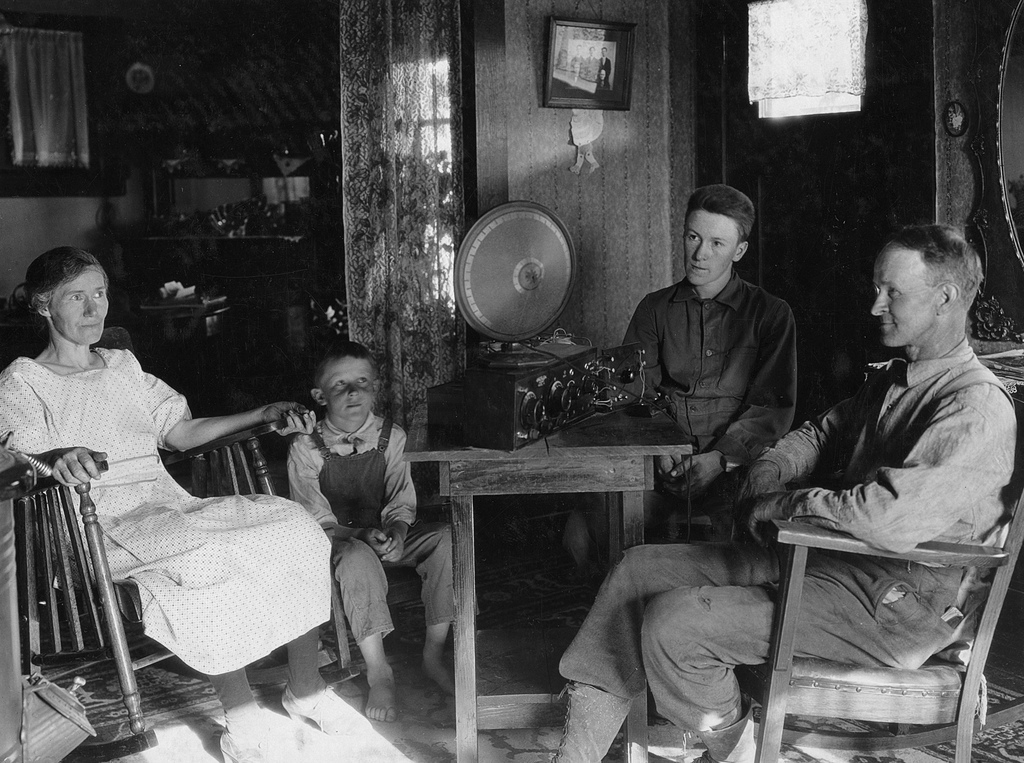 Americans used to get more information in common, like this Oregon family listening to the radio in 1925. Image courtesy National Archives (public domain)

This piece originally appeared on The Conversation.

Almost all the content and advertising on the internet is customized to each viewer. The impact of this kind of content distribution on the 2016 election is still being explored. But, we can certainly say that the campaigns used this to say different things to different people without having to worry about accuracy.

Recent news makes it clear...that micro-targeting is not so great for democracy.

Addressing this problem by having people screen ads is impractical and legally questionable. A more straightforward solution based on current disclosure laws is being discussed in Congress: Increase transparency by having digital media platforms post all ads on a web page that everyone can view.

Before the web, big data and machine learning, political groups and campaigns reached their target audiences through mass media – newspapers, radio and television. Most everyone saw the same news reports and advertisements at the same times. As a result, the public shared a common base of knowledge about what political candidates were saying. No longer.

Today, digital media platforms track what users look at, search for, post, like and share to micro-target their users with ads they are likely to want to see. Compared to the scattershot approach taken on TV and other mass media, micro-targeted ads are amazingly effective. This is great for the media platforms, who get to make money from advertisers. It is great for consumers, who can trade their time viewing ads they are likely to want to see in exchange for “free” use of the internet. And, it is great for businesses that get to reach their target audiences for less money.

Recent news makes it clear, however, that micro-targeting is not so great for democracy. Micro-targeted advertisements, which are at the heart of the most successful internet business model, allow political groups and others – including foreign countries – to tell Americans tens of thousands of different stories. Each of these messages is customized for people who are predisposed to agree with it, and unavailable for anyone else to check or verify. The net result is to increase divisiveness and disputes about “fake news” as the public’s common set of knowledge is divided into increasingly smaller pieces.

A look to the 19th century

The problem of politicians telling different stories to different people is not new. In 1840, William Henry Harrison’s presidential candidacy essentially invented the modern campaign. He was the first to hold mass rallies, make personal appearances and introduce catchy slogans. He realized that he could tailor his messages to different audiences, and even provide different segments of the population with different sets of facts. The people on the receiving end of his speeches would never know their counterparts in a different region were being told something different.

The solution: the traveling press corps made sure that everyone had access to all of a candidate’s speeches. Harrison and other candidates could, of course, still say whatever they want to any audience, but the press coverage made self-contradiction a political liability. Today’s solution is the same: Increase transparency. In the age of micro-targeted internet ads we need to make all ads available to all the people.

During the 2004 presidential election, transparency was essential to eliminating fake news. An ad campaign by a group called “Swift Boat Veterans for Truth” was created to discredit Democratic candidate John Kerry. In part because the public at large saw the ads, the effort was unmasked as inaccurate propaganda about Kerry’s service in the Vietnam War. By increasing the transparency around online ads, we the people can hold all politicians, parties and interest groups accountable, and return to reasonable debates based on a common set of facts.

The recent news that Russia tried to manipulate the election with micro-targeted ads on Facebook, Google and Twitter, and that advertisers can micro-target ads based on racist keywords, has led to calls for online media platforms to be more socially responsible and accountable.

The tech companies’ planned response involves hiring more people to review ads and keywords – a form of censorship. Even if each ad and its related targeting keywords could be vetted by the media companies, there are free speech issues involved in rejecting ads. Furthermore, motivated and clever advertisers are likely to find ways to reach their intended demographics.

Taking the lesson from history

As in 1840, Americans need help restoring the transparency that has been lost with changes in how campaigns reach the electorate. If media platforms were required to post all advertisements in an online archive on their websites for at least one year, then consumer groups, political watchdogs, the press and in fact any citizen would be able to monitor the ads being run.

In addition, at least for political ads, the keywords used to target the audience and the group paying for it could be included along with the ad itself. Keeping all ads on a known and publicly available page would make the ads available for all to see for a reasonable amount of time. Advertisers would be held accountable because everyone would be able to see the ad and it would not go away quickly. If we, as citizens, don’t take it upon ourselves to check the archive page, then shame on us.

It won’t solve all of the problems of micro-targeting. Advertisers and campaigns will doubtless try to circumvent whatever rules are in place. The goal is not perfect accountability, but a step toward it. Just as campaign laws require paid political ads on mass media to identify their funding sources, there should be a trail of accountability for advertisements on digital media platforms. This system is technically feasible and could be set up immediately. It is likely to reduce misinformation and curtail foreign manipulation at the same time, and could help the internet live up to its hope of improving – not hindering – democracy.