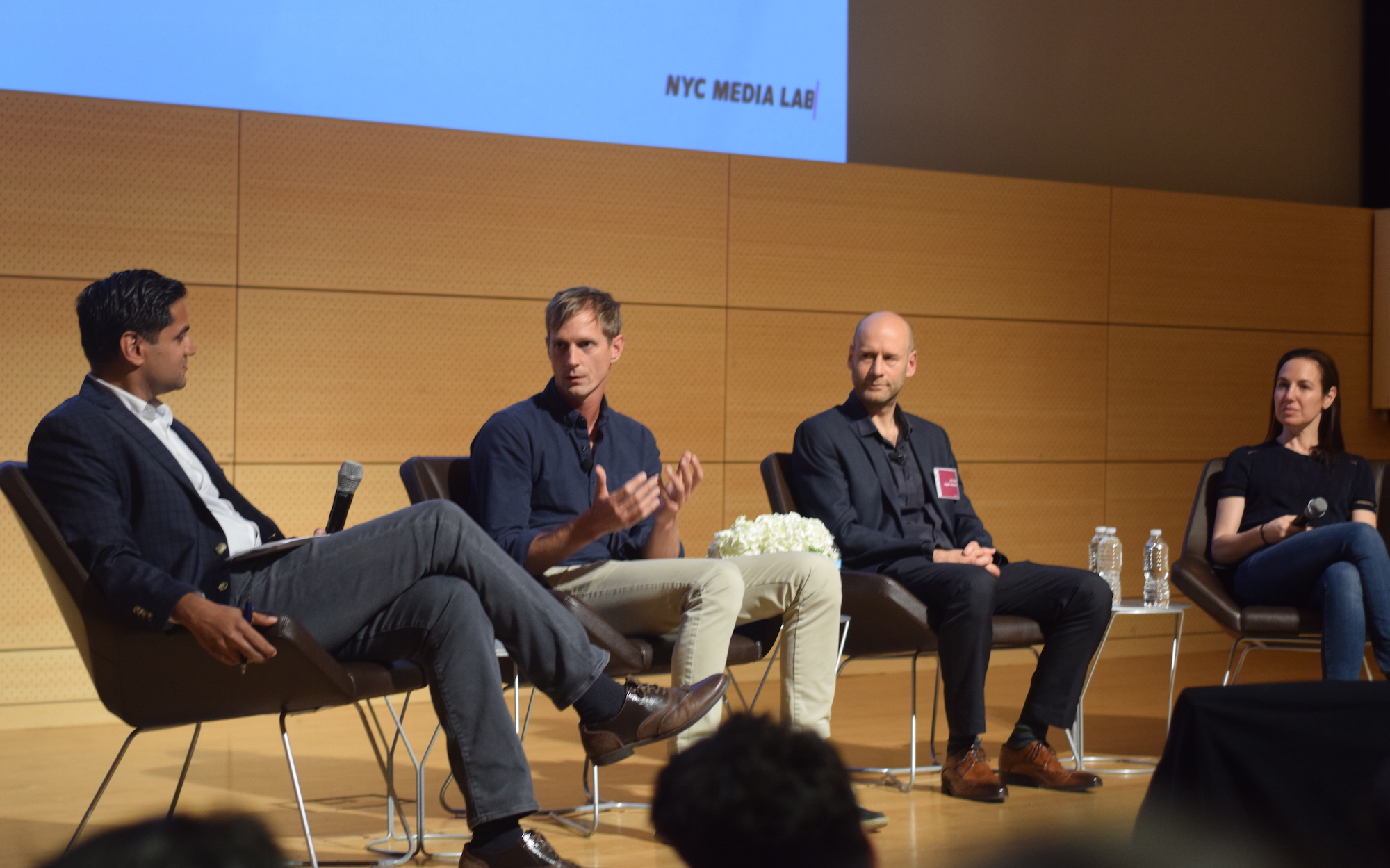 This year’s Prototyping Showcase, where students and faculty present demos, prototypes and startups that were developed with NYC Media lab, explored two themes in emerging media and technology: data science and augmented and virtual reality. However, it was AR and VR that took center stage, as NYC Media Lab and others involved with the Summit say they expect these technologies to greatly impact more industries in the near future.

“It’s a fantastic time in immersive technology, and when you look around [the summit], it becomes clear how useful these innovations and applications are going to be for people in industries like medicine, journalism, and even for job training,” said Adaora Udoji, an adjunct professor at the New York University Tisch School of the Arts who led the Prototyping Showcase for AR and VR.

The focus on these emerging technologies continued during the “How AR + AI Will change New York City” panel. Ori Inbar, founder of Super Ventures and co-founder of AugmentedReality.org, believes these innovations will “give people superpowers” by allowing them to “apply foundational technologies in every aspect of their lives.”

For example, three students at Columbia University’s Computer Graphics and User Interface Lab are working on a research project called vasAR to provide physicians with personalized 3D models of their patients’ blood vessels in AR. These models can provide interactive real-time guidance during procedures.

“These resources are going to provide faster and more efficient information,” added Udoji, “and we still don’t even know how far we can go with the technology.”

During the summit’s Demo Expo — the largest pan-university showcase of emerging media and technology in New York City with over 100 projects, prototypes and startups — participants saw examples of AR and VR technology that aim to impact civic and social issues.

One such project came from StreetsSmarts VR, a startup based in New York City, which brings realistic VR simulation training to state and local police departments. The lifelike simulation scenarios are intended to improve officer judgment and reduce avoidable violence between police and citizens.

StreetsSmarts VR’s founder, George Lamb, says he has already had promising results and feedback from police officers who have participated in the VR training. “Recently we had an officer tell us that one of our training simulations was exactly a situation he found himself in just the week before, and hearing that shows us that we are on the right path in providing police departments with adequate training,” Lamb said.

A student representative for Loup AR discussing how Augmented Reality will work in showing nutrition information on packaged food. Photo by Jonathan Gomez.

NYC Media Lab Executive Director Justin Hendrix believes that the work being done by the Media Lab’s consortium of universities and students is driven by an understanding of how these technologies can be used more responsibly.

“We are not here to create just for the sake of creating, we are here to build on ideas that will make changes in our lives,” said Hendrix, who praised vasAR and StreetsSmart VR for their civic-minded efforts.

NYC Media Lab’s goal is not only to drive innovation and job growth in media and technology, Hendrix said, but also to encourage startups to think ethically when creating new technology.

AR and VR may also impact journalism. You Are Here, created by professors Sandeep Junnarkar and Jere Hester of the CUNY Graduate School of Journalism, is a smartphone-driven immersive AR experience that uses archival photos of New York City and location-based technology to take users on a street-level trip through time.

“Right now our app uses the archival photos to tell a story about the city, but we want to see it grow and it to become a tool for gathering information for journalists can tell stories of the past and present,” said Hester.

The Demo Expo featured several other prototypes and startups that aim to function as learning tools and to improve quality of life issues.

Jonathan Gomez is a freelance journalist and photographer based in New York City, with work in a variety of publications in New York City. He was a Knight CUNY J Fellow at the CUNY School of Journalism in 2016.