Why Knight’s Jennifer Preston Moved Her Focus to Engagement Metrics 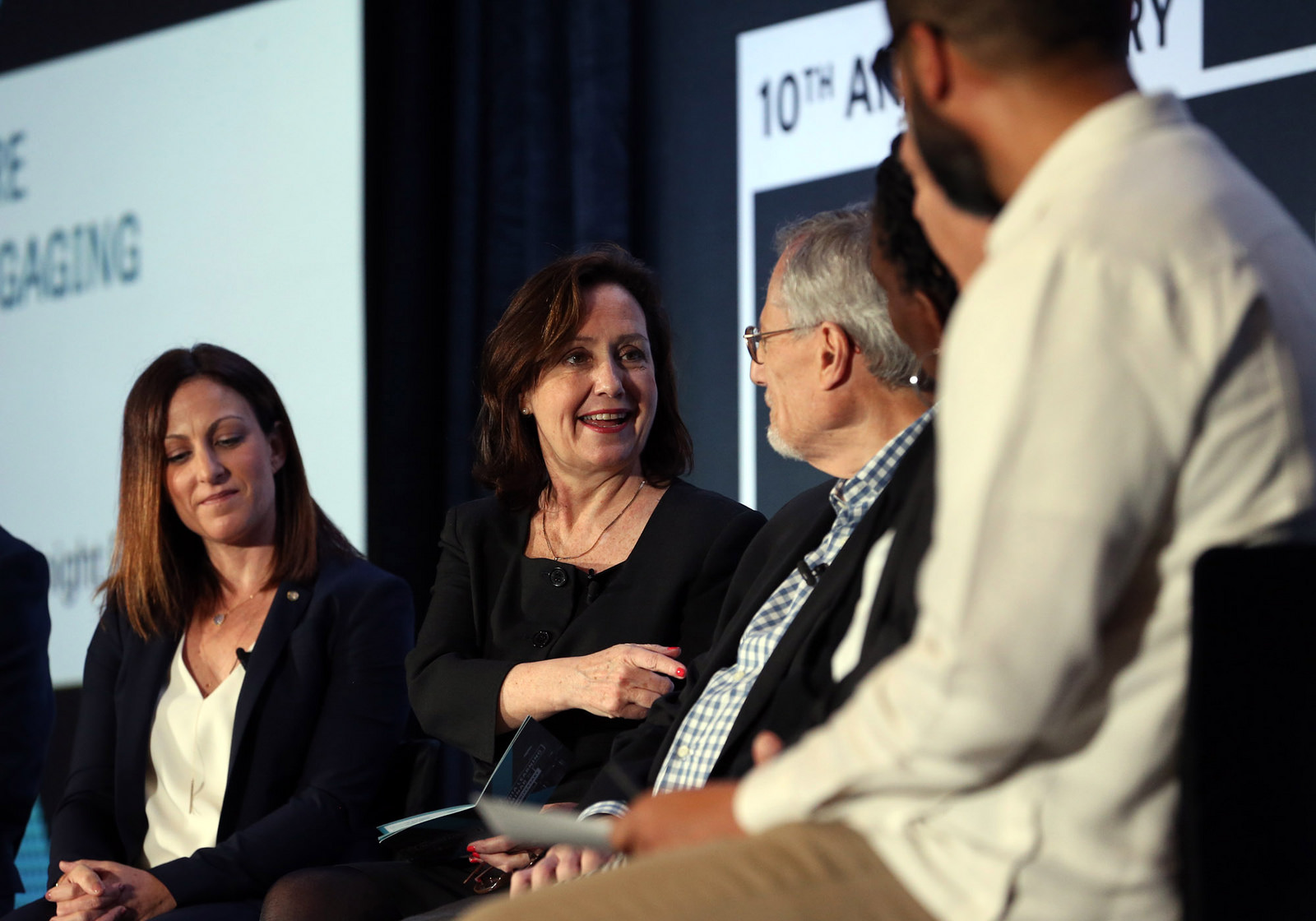 Jennifer Preston, middle, speaking on a panel. Photo by Knight Foundation via Flickr

In 2009, when the New York Times was looking to hire its first social media editor, it knew it wanted to tap someone with deep reporting and editing experience. In that way, Jennifer Preston was a natural fit: she’d been a reporter and editor at Newsday and then the New York Times for the past 25 years. One thing about her qualifications for the job, though, seemed a little strange to other social media editors of the time.

"The best way to get reporters back then to use social media was to show them what they were missing by not using it." -Jennifer Preston

“I did not have a lot of experience with these tools,” Preston says. “When I took the job, I didn’t even have a Twitter account.”

Preston is now vice president of journalism for the John S. and James L. Knight Foundation, where she oversees a $30 million annual portfolio. She says her experience as a social media editor helps in her current role, as Knight looks to fund projects, because she has an understanding of how social media and other digital storytelling tools can be used in a “positive way to promote engagement with readers to build trust, strengthen reporting and the business.”

I interviewed Preston about her time as social media editor at the New York Times, why she moved out of social and back to reporting, and how metrics for journalism have evolved in the past eight years. (The interview is edited for length and clarity.)

How was the social media editor position at the New York Times created?

Jennifer Preston: Social media efforts at the Times were well underway when I took on the role as the first social media editor in early 2009. Thanks to Cynthia Collins, Soraya Darabi and Stacy Martinet from the marketing and communications teams, the Times had already developed a strong presence on Facebook, and working with Jake Harris, a rock-star developer, the Times had created multiple organizational accounts. At that time, we also had key Times staffers using social media brilliantly including Brian Stelter, Nick Kristof, and Jenny 8. Lee.

Senior newsroom leadership saw the importance of social media beyond its obvious role of distribution, marketing and branding. So in 2009, Jon Landman, who then oversaw the digital news operation, asked me to take on the role of exploring what social media meant for Times journalism and to be an evangelist in the newsroom for social media.

At the time, I was a veteran journalist who had worked as both an editor and a reporter with a deep interest in data journalism and multimedia storytelling. As a former circulation marketing manager for Newsday, I also saw the obvious potential in using social media to find and engage with a new audience. My initial focus was on answering the question: What is the role of social media for Times journalism?

What stood out about social media back in 2009?

Preston: These tools were powerful in the hands of a great reporter – key to newsgathering – to identify trends, find sources, breaking news and other information. And most importantly, listen and engage with people you meet online.

Because it was easy to demonstrate the value of social media for reporting, I did not meet with tremendous resistance when I worked my way around the newsroom offering to train Times reporters and editors in how best to use these tools. You have to remember that social media was the first time that many journalists were able to “touch” the web and engage with people directly online.

We often underestimate the role that social media has played in accelerating innovation in creating new business as well as the digital transformation of traditional newsrooms.

What was it like to be in that new role, even though you’d already been at the Times for more than a decade?

Preston: I had a lot to learn. And I had to learn fast and publicly. Since I had little or no experience using Twitter when it was announced I was taking on the role, I endured a lot of skepticism from Twitter users. I made a lot of mistakes early on from posting broken links to not responding right away to @-replies. I will say that I got an enormous amount of help from Twitter and other social media editors and users along the way. I learned in real time – and brought that empathy to my work in training other journalists to use these tools.

As I recall, I faced the question: Why did the Times put a veteran journalist — and not a digital native — in the job? The answer was that Times leadership wanted someone who could help find and show the value of social media for reporting, for the journalism. That was considered the best way to persuade Times journalists to take up and embrace these tools. The idea was to have someone with longtime editing and reporting experience figure it out. That was my job.

I will say that I was lucky to work with so many innovative people around the newsroom who were willing to embrace change, especially in the Sports Department. I tell everyone to start with your colleagues in the Sports Department if you want to experiment. And the best way to get reporters back then to use social media was to show them what they were missing by not using it.

How did metrics come into play with social media early on?

Preston: At that time, we were looking at primarily building up followers on all the platforms. We were also looking at trying to use social media, specifically Facebook, to create a community around specific areas of coverage such as theater coverage, and niche areas, such as a Facebook community around our Civil War blog.

Since we were, at that time, introducing the metered [paywall] model, we were very interested of course in understanding what platforms drove the most traffic to nytimes.com and what platforms could be used to find, build and engage with an audience that would consider digital subscriptions. So paying attention to both engagement metrics — and overall traffic — was key. Chartbeat, as I recall, was just getting started then.

What led you to return to being a staff writer?

I was able to begin reporting on the Arab Spring and explain to Times readers how people used Facebook and Twitter to try to overthrow an authoritarian regime. It was fascinating to be able to report on how social and mobile was rapidly changing the way that people eat, love and pray in those early days.

Now you oversee the Knight Foundation’s journalism grantmaking. What metrics do you look at most often?

Preston: At Knight Foundation, we are looking to support people and projects who are filling critical gaps with innovation and digital transformation, finding new methods and models, that can be widely adopted. We don’t have enough resources to support one newsroom at a time. So we are always looking at how solutions can be scaled and benefit many newsrooms and people. When we see an investment in a tool — such as DocumentCloud — get widespread use across the industry, that is the best measurement of success.

What do you think are the “right” metrics for journalists to value?

Preston: Most people finally now recognize that all the traffic in the world is not going to address the ongoing concerns about the business models. That is why metrics focused on engagement — and metrics focused on your most engaged users — is important.

This is the fifth in a series. Did you start out in a social media position between 2005-2010? Where are you now? Get in touch with the reporter and share your experience. Julia Haslanger can be reached at [email protected]