by Erin Reilly and Amara Aguilar 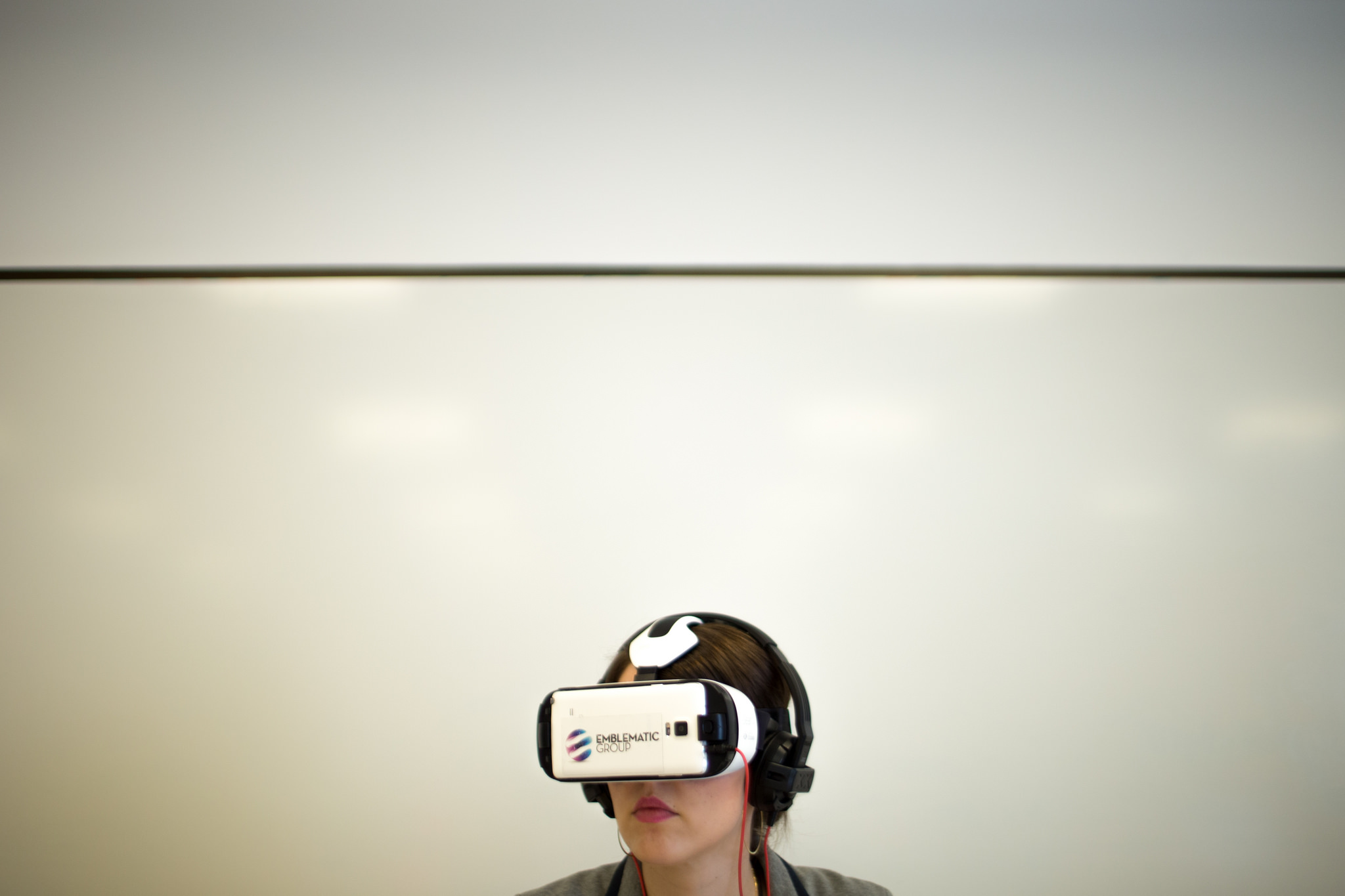 “Virtual Reality Demonstrations” by Knight Center for Journalism in the Americas, University of Texas at Austin is licensed under CC BY 2.0

A longer version of this article was first published on Medium.

As 20-year old Ajene Harris slipped on a Samsung Gear VR headset for the first time at the University of Southern California Innovation Lab, his mouth dropped.

This is not traditional filmmaking, so stop trying to recreate what you can do in other media. Be open to what VR has the potential to be.

The USC communications major began to be immersed in the New York Times’ “Fight for Fallujah,” a virtual reality story that takes users to a war-torn area filled with conflict.

He watched the piece, along with seven of his classmates in USC Annenberg’s Advanced Journalism for Mobile and Emerging Platforms class.

During the spring 2017 semester, the students in the class participated in a preliminary study that looked at how six virtual reality stories with the theme of war and conflict affect users’ emotions, specifically apathy, sympathy and empathy. (The six pieces were: “Project Syria”, “Clouds Over Sidra”; “The Fight for Falluja”; “Zambia, Gift of Mobility”; “6×9: A Virtual Experience of Solitary Confinement”; and “Pearl Harbor Attack Re-Enactment”.)

The View Through the Headset

Most of the students had only experienced 360 stories on their mobile devices, and not through a headset, which triggered mouths to drop and “wows” as they realized that immersing oneself through a headset was a completely different experience.

“Because all of the stories focused on war and conflict — a theme that can feel quite far away and impossible to grasp for a person who has not personally experienced the conflicts of war — it seems that generating true empathy in a viewer is rooted in the development of some shred of a personal connection — a common ground — between the viewer and the characters in each respective story,” USC student Emily Czachor said in a focus group.

The study, entitled “Headspace VR,” aimed to connect the heart to the head as students stepped inside virtual reality. It combined qualitative and quantitative data — including surveys, interviews, and data collection using neurotechnology, biosensors that tracked heart rate, and skin conductivity.

“Overall, from viewing all of these VR pieces, I learned that a VR experience through a headset makes a world’s difference than just playing that same VR piece online in a web browser,” USC student Moera Ainai wrote in a Medium post. “It is almost like an out-of-body experience in some cases. No matter how much I liked or disliked the storytelling techniques in each piece, every time I took off the gear, I would have to adjust back to the classroom setting I was actually sitting in the entire time. I felt real emotion, whether it was for Sidra or someone in solitary confinement, and that was what turned what was just a few minutes in a headset into a meaningful experience.”

The results show that virtual reality breathes with story and character. For many of the participants, it was more important that the journalistic stories were narrated in the third person point of view than from a live action main character in order to foster empathy. Participants would rather virtually walk beside another person, than walk directly in that person’s shoes. Human characters were the lifeblood of the stories, according to preliminary research results.

Post survey results showed “Clouds over Sidra” had the strongest storytelling quality and biosensor data affirmed participants had a significant higher emotional intensity with it than with the other narratives.

Many shared walking alongside Sidra, the main character, and hearing her story gave a sense of inhabiting the space and better identifying and sharing in the complex emotional feelings characters portrayed. This, in return, stirred affective empathy in each participant.

“A personal narrative makes people care about the story and, thus, feel immersed and involved in the outcome of their lives. I could relate to the VR experiences and empathize with the characters’ struggle or living situation when I had a subject to latch onto emotionally,” Gabriela Vidal said.

However, the environment is an emerging leading character in a VR experience, according to the study results. It is the heartbeat of a 360 story. For example, though “Project Syria” didn’t resonate across all participants as immersive, it did have the highest emotional activation with the three narratives used to collect data with the neuromarketing biosensors.

Emotional Activation refers to when an event immediately captured the subjects’ attention. Project Syria correlation of all data shows that one moment (when a bomb goes off) had the highest emotional activation.

In addition, though many participants realized they were in a classroom sitting in a chair viewing the story through a VR headset, participants shared that of all the varied media creating the VR experience, the audio took them to another place and made them feel lost in the moment. The more powerful VR stories had spatial audio, a technique that captures sound in all directions of the environment helping to direct the viewer’s attention in the environment. From a medium perspective, audio is the key to ensuring a sense of “being there” and encourages the most emotional impact.

“As far as empathy is concerned, I really liked when the narratives were genuine and used real characters or even audio to move the narrative,” USC student Tiffani DuPree wrote in a Medium post. “For example, I was able to empathize with the characters while watching Project Syria before I even knew the audio had been taken from real events. Somehow, just listening to the audio and watching the computer-generated characters in the story made me understand the story even more.”

So if the environment is the heartbeat of a VR storyworld and spatial audio helps to build and support emotional impact, then the old adage of “KISS (keep it simple, stupid) it” may apply. Creators have an entire toolset to pull from in shaping a story. Yet layering additional text, animations or additional video (i.e. a picture within a picture) should be considered unnecessary complexities to avoid. Simplicity with a focus on higher production value and quality appeared more important to participants. Students did not relate to animated characters as much as they did to cinematic ones, where they could see human faces in a real world environment.

”I felt as though reliance on graphics and animation to tell the story actually diminished its immersive quality, and served as a constant reminder to me — the viewer — that the world I was experiencing was, in fact, merely a simulation, rather than a replicated world of which I was a part,” Czachor said in a focus group interview.

The study was done to better inform the news industry about audience engagement, best practices for journalistic virtual reality storytelling, and to look at what motivates users to become more engaged citizens.

Many news organizations have recognized the importance of focusing on audience engagement. With this virtual reality study, we applied the Leveraging Engagement framework to examine in what ways audiences would take action after viewing VR stories. What motivated participants behavior the most was an interest in watching (entertainment), immersing themselves in the environment for a moment (immersion), and at best, creating a personal connection to who they are as a person (identification).

However, the experiences were limiting in providing enough time to really understand the topic (mastery) or material to get behind it and take action (advocacy). With VR being an emergent technology, one would think that sharing it socially with others would be a strong motivator (social connection). However, with the few participants that shared with friends, it was always in person rather than what we might assume, online via our social networks. This means two things. The sharing functionality within the VR environment needs to be further designed and developed. And, the sharing in person with friends meant an importance of watching reactions over viewing it individually in a VR headset.

After watching “Clouds Over Sidra,” Anai wrote in a Medium post that her view on the subject matter was “heightened immensely” and it made her “want to look more into the crisis as well as share the stories and spread just how important this matter is.” She added, “It kills me that [I] alone can’t make a difference.”

It’s unclear whether VR is enough incentive on its own for viewers to take immediate action on the cause or subject shared. Each time, the participants watched a VR story we offered a printed Take Action worksheet with reminders and follow up links for four weeks after viewing. This gave participants additional opportunities to further engage in the subject matter from watch it again, share it with a friend, read more, join, donate… all the way to connecting with the creators and distributors with write a note to download their app and watch more.

This small pilot study was conducted to establish the methodology and test out technology with a small set of participants, so there’s more research to be done, and students want more of this type of applied learning. However, we came away with some tips to improve VR stories which correlate with the core attributes of being mindful and fostering empathy:

STOP — This is not traditional filmmaking, so stop trying to recreate what you can do in other media. Be open to what VR has the potential to be. You have this moment in time for the viewer to lose herself and shift her focus from real life — take advantage of it by exploring all senses, and not just what the eyes can see.

LOOK — Allow things to be what they are and let the sense of space speak for itself. Don’t try to overproduce with different techniques or bells and whistles. For the pilot participants, less was more. A focus on making the details of your chosen media work best is important.

This pilot study gave students in the Advanced Journalism for Mobile and Emerging Platforms class the opportunity to look at virtual reality critically from a user experience point of view. They also were trained in 360 storytelling and were able to apply what they learned as audience members to their storytelling in the field. We hope this preliminary study will help others interested in VR storytelling to do the same.

“From viewing all these VR pieces, I have learned the many ways 360 and VR can be effective in telling a story and portraying aspects of a story that viewers were not able to experience before. I learned that if done correctly, a VR piece can really tell a powerful story or leave the viewer thinking about what they had just experienced,” Dupree wrote in a Medium post.

Erin Reilly is a consultant helping others to understand and strategize about storytelling, engagement, play and learning through emergent technology. Amara Aguilar is an associate professor of professional practice in digital journalism at the University of Southern California Annenberg School of Communication and Journalism. She teaches courses in mobile and emerging platforms, social media, design, digital news project development, among other areas. She loves journalism, Star Wars and all things tech.