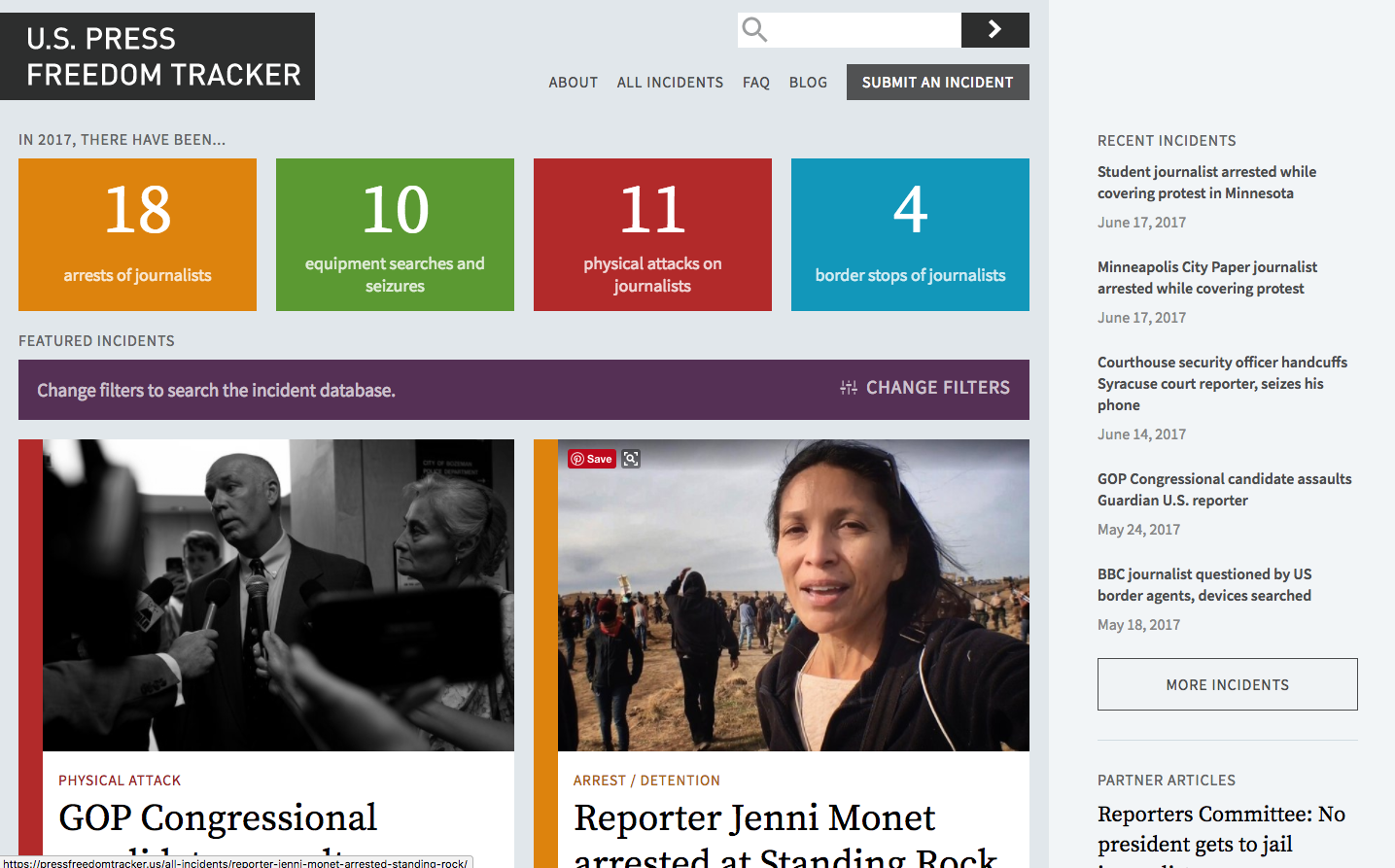 A screenshot of the U.S. Press Freedom Tracker.

As concerns about domestic press freedom violations grow, a coalition of media partners has created a database to track those violations.

Launching today, the U.S. Press Freedom Tracker will serve as a database and central repository for violations committed against members of the media.

The tracker primarily focuses on government interference with the press, including those actions by the Trump administration, as well as local elected officials and police departments.

The tracker is a collaborative project from about 20 media partners. Day-to-day operations will be maintained by the Freedom of the Press Foundation, and a steering committee will be lead by the CPJ. MediaShift is also a partner.

“This represents the work of a lot of organizations who believe in press freedom and work on behalf of press freedom,” Kathleen Carroll, the chair of the Committee to Protect Journalists and the former executive editor of the Associated Press, said at a press briefing in New York City last week.

Documentation matters, she said, and the data can help inform future litigation.

Peter Sterne, a senior reporter at the Freedom of the Press Foundation and the managing editor of the Press Freedom Tracker, said the database can help identify trends and patterns.

Cases already featured on the site include Guardian U.S. reporter Ben Jacobs’ assault at the hands of U.S. Rep. Greg Gianforte, several journalists who were arrested during the Standing Rock protests and several border stops that have occurred in recent months.

If you’re a journalist and need to hand over your phone, that could be dangerous for your sources.

The tracker’s partner organizations, many of whom focus on press freedom issues, will help gather information about various incidents. However, readers outside the coalition can also submit tips, and Sterne will then follow up on tips in order to verify them.

Sterne acknowledged that some types of incidents, such as equipment searchers and border stops, are harder to identify. Incidents can be subjective and may come down to editorial discretion, he said.

While the tracker only logs incidents that happen to journalists, the project maintains a broad definition of who is a journalist, according to Sterne. Anyone who is “doing journalism,” including citizen journalists and bloggers, qualifies.

The tracker will log information beginning Jan. 1, 2017. The focus is to collect information going forward, Sterne said, because users are more likely to submit incidents when they know the tracker is already in operation.

Collecting information from past years could result in missing incidents and potentially skew the data.

Finally, users will be able to download clean data directly from the site.

“The hope is that if you’re writing about a journalist who is arrested or a journalist who is physically attacked, this provides context,” Sterne said. “You can say, ‘This is the thirteenth time this has happened this year.’ I think we all know that journalists get arrested, especially during protests. We know people were arrested at Standing Rock, we know people were arrested at the inauguration. But I don’t think that people have a sense of the scale. We don’t know how many times it happens. Until now, we’ve really had to go and look one by one.”