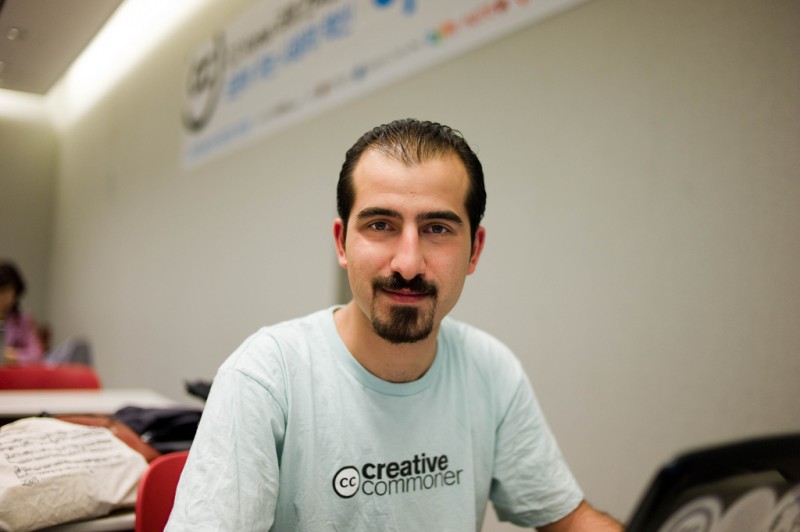 Open web activist Bassel Khartabil was executed in 2015, according to new reports. Photo by Joi Ito via Wikimedia (CC BY 2.0)

This week, open technology and knowledge advocates around the world mourned the execution of Bassel Khartabil, an open web advocate and close friend of many in the Global Voices community. Bassel was reportedly sentenced to death in November 2015, at which point his whereabouts and condition became unknown. His wife Noura Ghazi learned this week that he was executed in 2015.

Khartabil spearheaded the open source technology movement in Syria, as an avid contributor to global projects like Creative Commons and Wikipedia, and as co-founder of the country’s first open technology lab in Damascus. To honor his country’s historic past, he worked with technologists and architects to virtually reconstruct the ancient city of Palmyra, in hopes of reviving its historical notoriety.

Like so many other peaceful technology developers and activists in Syria and beyond, Khartabil was accused of “harming state security.”  In a December 2012 military field court proceeding, he was interrogated by a judge, but to his family’s knowledge, never received further word on the status of his case.

In The Cost of Freedom: A Collective Inquiry, a book of essays and poems written by artists, thinkers and technologists who knew Bassel, his wife Noura Ghazi reflected on his spirit:

I’ve lived all my life dreaming of Freedom, and Bassel taught me to embrace it…. He has always shared his knowledge with everyone who asked, and has also taught many prisoners to read, write, and speak English. Bassel opened the door to technology for me, he taught me to use both computers and smartphones. He taught me the Internet. He also taught other prisoners to use computers theoretically, without having one in their hands.

In a one-day trial on July 25, the People’s Court in Vietnam’s Hà Nam province sentenced Trần Thị Nga to nine years in prison and five years of house arrest for “conducting propaganda against the State.” The 40-year-old Nga, also known by her pen name Thúy Nga, is a prominent advocate for migrants and land rights. She has also been documenting and campaigning against police brutality on her Facebook page and her YouTube channel. Nga has been frequently intimidated and physically attacked by police for her work.

A man in Kashmir was detained by police after allegedly writing “anti-national” posts on Facebook. Local residents complained to police about the posts, which appeared after India lost to Pakistan in an international cricket competition. An officer told the Kashmir Observer “We are running a check on whether this person has links with any terror outfit or not. We are also scanning his activities on social networking sites.”

A government employee in Brunei was charged with violating the Sedition Act after he complained on Facebook about new Halal certification regulations released by the Ministry of Religious Affairs. Global Voices’ Mong Palatino explained that given Brunei’s stringent media regulations, issues related to civil liberties are not often discussed online. “That’s why the [online] conversation about Shahiran’s case provides a rare glimpse of how some netizens think about the situation in the country today,” he wrote.

In an effort to more closely examine this connection, the Global Internet Forum to Counter Terrorism convened this week in San Francisco. Formed by Facebook, Microsoft, Twitter and YouTube, the Forum includes representatives from the tech industry, government, and NGOs to discuss and respond to critiques from the European Commission and other governments that tech companies need to do more to combat terrorism and hate speech on their platforms.

However, activists are criticizing the companies for failing to distinguish between hate speech and genuine criticism. Minority groups in the US report being disproportionately censored when they use social media to call out racism by other users, even when their posts repeat and criticize, word for word, the uncensored hateful posts sent to them by other users. Stacey Patton, a journalism professor at Morgan State University, told the Washington Post:

In the era of mass incarceration, you come into this digital space — this one space that seems safe — and then you get attacked by the trolls and put in Facebook jail. It totally contradicts Mr. Zuckerberg’s mission to create a public square.

New research by Global Voices shows that Free Basics, the “free” mobile version of Facebook, makes it difficult for users to assess the reliability of news articles. The app only allows users to read headlines and the captions of photos, stripping away valuable context that helps users determine the validity of the information in a news report. Given the proliferation of copycat websites spreading fake news, this makes it easier for Free Basics users to spread false information without realizing it.

Forget censorship — Tajikistan will monitor the web instead

Tajikistan’s parliament passed a set of amendments to the country’s criminal law that grant security services the right to monitor and control citizens’ online activities. This includes keeping detailed records of SMS and mobile messages, social media comments, and anyone who visits websites deemed “undesirable”, though it is unclear what sites would qualify. The law also criminalizes making comments that could damage someone’s personal honor or undermine national security, with a minimum punishment of two years in jail. The legislation marks a shift in approach for the Tajik government, away from using censorship to ban controversial websites and services, instead opting to monitor citizens’ activities across the web.

On June 24, Palestine passed a new law regulating online transactions, media websites and social networking sites. The law outlines a number of “cybercrimes” that can be punished by up to 15 years in prison or hard labor for life. While it lists a few cybercrimes that should be fought at all costs such as sextortion, fiscal fraud, and identity theft, it also gives the public prosecutor’s office unlimited powers to surveil Palestinian citizens, intercept their online communications, and arrest them for airing their opinions and political views online. The law was approved by President Mahmoud Abbas just two weeks later, with no opportunity for input from civil society.

Apple informed customers it will take down VPN services from its app store in China to bring it into compliance with the government’s crackdown on companies offering VPN services to the general public. However, Chinese users can still download and continue using such apps as ExpressVPN if their Apple accounts are registered in overseas app stores with a billing address outside of China.