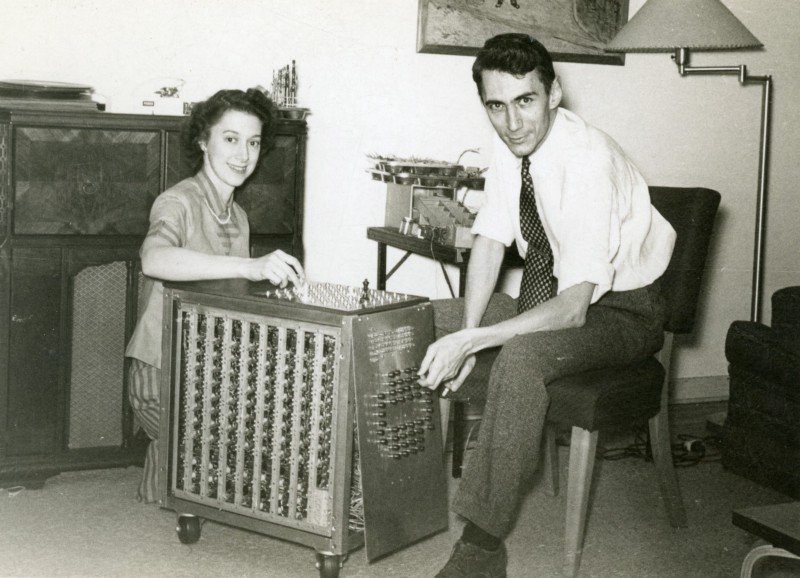 Jimmy Soni and Rob Goodman argue Claude Shannon is the most important genius you don't know. Here Shannon poses in front of his chess-playing machine. (Credit: The Shannon family)

We’re back! The MediaShift Podcast is starting out its Fall Season this week, so stay tuned for new episodes each Friday.

In the news this week, tech platforms Google, Reddit, GoFundMe and others deny service to those promoting hate speech in the wake of the Charlottesville violence. Has their neutral stance toward content changed? Storied alt-weekly The Village Voice ended its print run and went online-only in the latest hit for legacy media. And publishing platform Medium is trying out a new clap-for-pay model that compensates writers according to the number of virtual claps they get on their stories from paid subscribers. Our Metric of the Week is Local Impact, and authors Jimmy Soni and Rob Goodman join us to talk about their book, “A Mind at Play” about Claude Shannon, the most important information age genius you’ve never heard of.

Jimmy Soni has served as an editor at the New York Observer and the Washington Examiner, and as managing editor of the Huffington Post. Rob Goodman is a doctoral candidate at Columbia University and a former congressional speechwriter. He’s written for Slate, The Atlantic, Politico, and The Chronicle of Higher Education.

Rob Goodman is a doctoral candidate at Columbia University and a former congressional speechwriter. He’s written for Slate, The Atlantic, Politico, and The Chronicle of Higher Education.

A Critical Moment for Hate Speech (and Free Speech) Online

Since the dawn of the web, user-generated content platforms have considered themselves as neutral and not responsible for questionable content. But that calculus is changing fast in the wake of the deadly white supremacist rally in Charlottesville, Virginia. Recently, Facebook, Reddit, GoDaddy, Google, GoFundMe, Spotify, several credit card companies and even dating site OKCupid have taken steps to ban hate groups from using their services. In response, the Electronic Frontier Foundation cautioned that removing speech of hate groups could limit the First Amendment. As the EFF wrote in a blog post: “Protecting free speech is not something we do because we agree with all of the speech that gets protected. We do it because we believe that no one—not the government and not private commercial enterprises—should decide who gets to speak and who doesn’t.” They cautioned that, “We would be making a mistake if we assumed that these sorts of censorship decisions would never turn against causes we love.”

In the New York Times, columnist Jim Rutenberg also questions where to draw the line, but writes that it’s “truly remarkable” that the platforms are only taking action now, in some cases years after activists first started to flag some of the hate groups online. The tech companies have cited free speech concerns for not policing their platforms when confronted with issues of harassment and hate speech. For several years, Twitter positioned itself as the “free speech wing of the free speech party,” though lately it’s added more tools for users to block unwanted posts from their timeline. After banning the neo-Nazi website Daily Stormer, CloudFlare’s CEO wrote in a company wide memo, “Literally, I woke up in a bad mood and decided someone shouldn’t be allowed on the Internet. No one should have that power.” We’ll see if the heavy-handed moves by tech companies continues or whether they fall back on a more neutral stance in the years to come.

Long before there were blogs, alternative weeklies were employing young up-and-coming writers with punchy prose and shaking up the journalism hierarchy. Now the Village Voice, one of the most well-known alt-weeklies, is going digital-only after 62 years in print. In its time the Voice has won multiple awards including three Pulitzers. The Voice was founded in 1955 by Dan Wolf, Ed Fancher, and Norman Mailer, and helped launch the careers of journalists like Wayne Barrett and Nat Hentoff, both of whom died earlier this year. Other writers that could be found between its pages include the likes of Ezra Pound, James Baldwin, and Allen Ginsburg.

But no paper has been immune to the divergence of ads dollars to digital advertising and the loss of classified revenue from sites like Craigslist. Since the start of the century, the Voice has changed hands three times and Peter Barbey, who bought the paper from Voice Media Group in 2015, said the company will continue to focus on digital publishing and events. In the end, alt-weeklies will need to figure out how to compete with the proliferation of voices online and make sure to find their community wherever they go. Longtime Voice columnist Michael Musto was still feeling positive, writing: “Enough with the crocodile tears. Print won’t survive, but the Village Voice might, despite all the terrifying obstacles in the way of trying to be alternative these days.”

Medium Tests Out a Pay-Per-Clap Model

The publishing platform Medium announced that it’s experimenting with a new way to compensate writers: claps. The platform introduced the new engagement metric earlier this month in an effort to gauge how much readers liked an article. The new clap icon follows readers as they scroll through an article and can be clicked up to 50 times. A small group of writers will have the ability to publish stories to paying members of the site and will receive payment based on engagement. Subscribers will determine how many claps they give to a post, thus controlling how their $5 monthly subscription fee is allocated. Medium did not say how much writers potentially could make or how many subscribers they have yet.

Many media critics (and former employees) were not impressed with the idea. Motherboard’s Louise Matsakis wrote that “this is… probably not going to work” and pointed out that it’s confusing to people to differentiate between “likes,” “claps” and “shares.” One former employee, Tess Rinearson, showed on Twitter how she used a banana leaned up against her smartphone to give someone a lot of claps. But seriously folks… Medium will need to make sure they stay on point with this kind of experimentation, as it laid off a third of its staff when it pivoted away from sponsored ads and toward paid content. The idea behind paid content is creating something premium, and the clapping symbol might not be the right way to get that point across.

– Facebook will live-stream 15 college football games this year in a push for more video.

– Podcast startup Art19, which powers podcasts by the New York Times and Vox, among others, raised $7.5 million in new funding.

– And CNN launches a daily Snapchat news show called The Update to reach a younger audience.