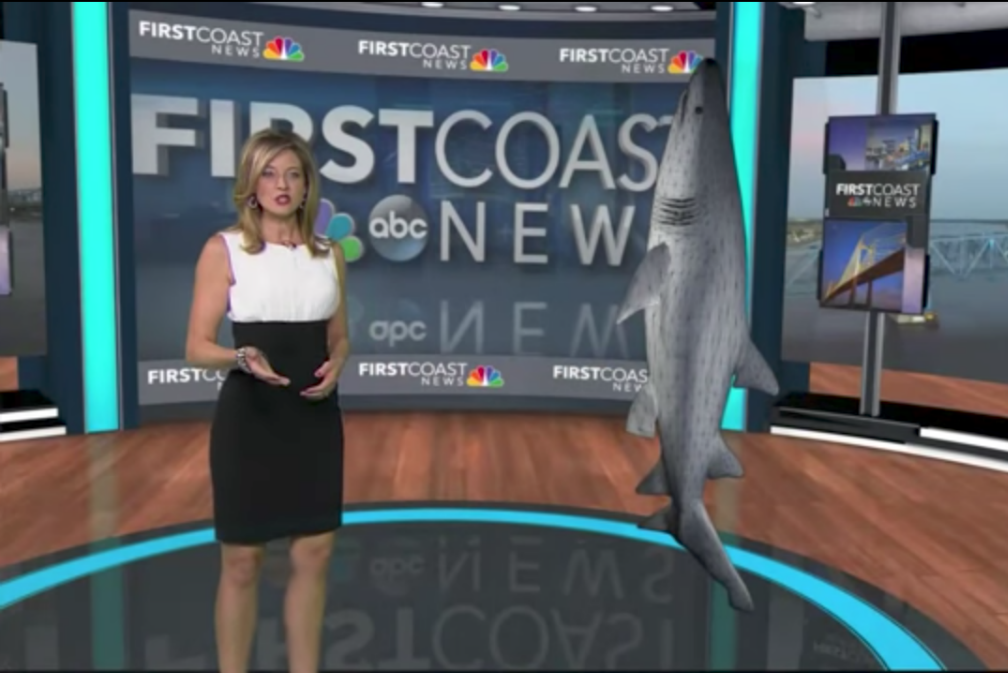 This story was originally published on RJI Online.

Most of our conversations center around “how can we best tell the story?”

First Coast News is the news operation for Tegna television stations WTVL, an NBC affiliate, and WJXX, an ABC affiliate.

During recent newscasts, First Coast News anchors in the studio have dodged a school bus and shared the screen with a circling shark — both virtual, of course.

I visited with News Director Meagan Harris about the experiments.

Why is the station experimenting with 3D and augmented reality technologies?

We’ve been doing news the same way for too long. If you were to Google “1980s newscast,” the show is going to open with a two-shot, animation and then a reporter live in the field. We have to be better than that. The virtual set allows us to be creative. Instead of building a newscast we’re building a show.

What resources, such as extra staff, funding and equipment, has this project required so far?

Harris: We had to buy the virtual set, which is cheaper than buying a real set.

Tegna, which has a graphic hub that works out of Denver, makes a lot of the graphics for us. I also hired one employee who does 3D animation and we had another employee who dabbled in that as well. For six months we’ve been training them on how to use this system and how to make things through the system. We’re teaching our people how to make the augmented reality elements like the shark and the school bus. It takes an incredibly long time to make any kind of high quality augmented reality element but the finished product is worth it. I also utilized the employees I already had and cross-trained people on how to shoot the virtual set with a jib and a steadicam.

Most of our conversations center around “how can we best tell the story?”

How do you decide which stories and projects warrant these technologies?

Harris: We use the virtual set every day for every single show. We can transition from the real set to the virtual set seamlessly. As far as the augmented reality-type stuff, it takes a really long time to make these. We can’t order something to be made that day and get it that day. We have to think weeks and months in advance. Before school started we ordered a 3D augmented reality element of a school bus. We know the Jaguar’s season is coming up. We try to order one augmented reality element a month because we’re starting from scratch. We have to build a database of elements we can utilize. For now, as far as augmented reality elements, we can only use what we have. Most of our conversations center around “how can we best tell the story?” That’s the conversation we have from top to bottom from producers to photographers to reporters. That conversation starts in the morning meeting and we continue it throughout the day.

What have been some of the challenges of using this technology?

Harris: The anchors had to get used to it. They’re use to sitting behind a desk and now you can see them from head to toe. They can’t see where they are beyond the monitors. It’s extremely uncomfortable for the on-air talent in the beginning. You’re literally standing in a green room. You have to know where the virtual monitor is going to pop up from the virtual floor or where it’s going to fall down or what’s coming in and how to move around it to make it look as if it’s real.

Getting high quality graphics done in a timely manner has also been a challenge. It just takes time to get them produced.

What advice would you have for other newsrooms that are interested in experimenting with this technology?

Harris: Be patient. Many people in television are like me. We’re instant gratification kind of people. The reality is if you want it to be good, sometimes it takes a little bit of time to get it done and do it right.

It might seem like an eternity, which is like six months in my world, because I wanted it on the air yesterday. Now I see the product on the air and it was worth the wait. You have to do it right. You don’t want to rush it. With that said, if you look at the way television is changing, we don’t have time to wait, so you have to find a happy medium.

How has your audience responded to this?

I’m not going to lie: I can’t look at my ratings and say, “Oh I’ve seen this massive increase when we started to do this.”

It’s a slow process and you have to believe in it and continue to do it for viewers to notice. Do viewers notice? Absolutely. But you’re fighting changing viewing habits. It’s just a reality. When I look at my news product, it’s no longer a television station, we’re a media outlet. We provide content on many platforms.

This story was originally published on RJI Online.