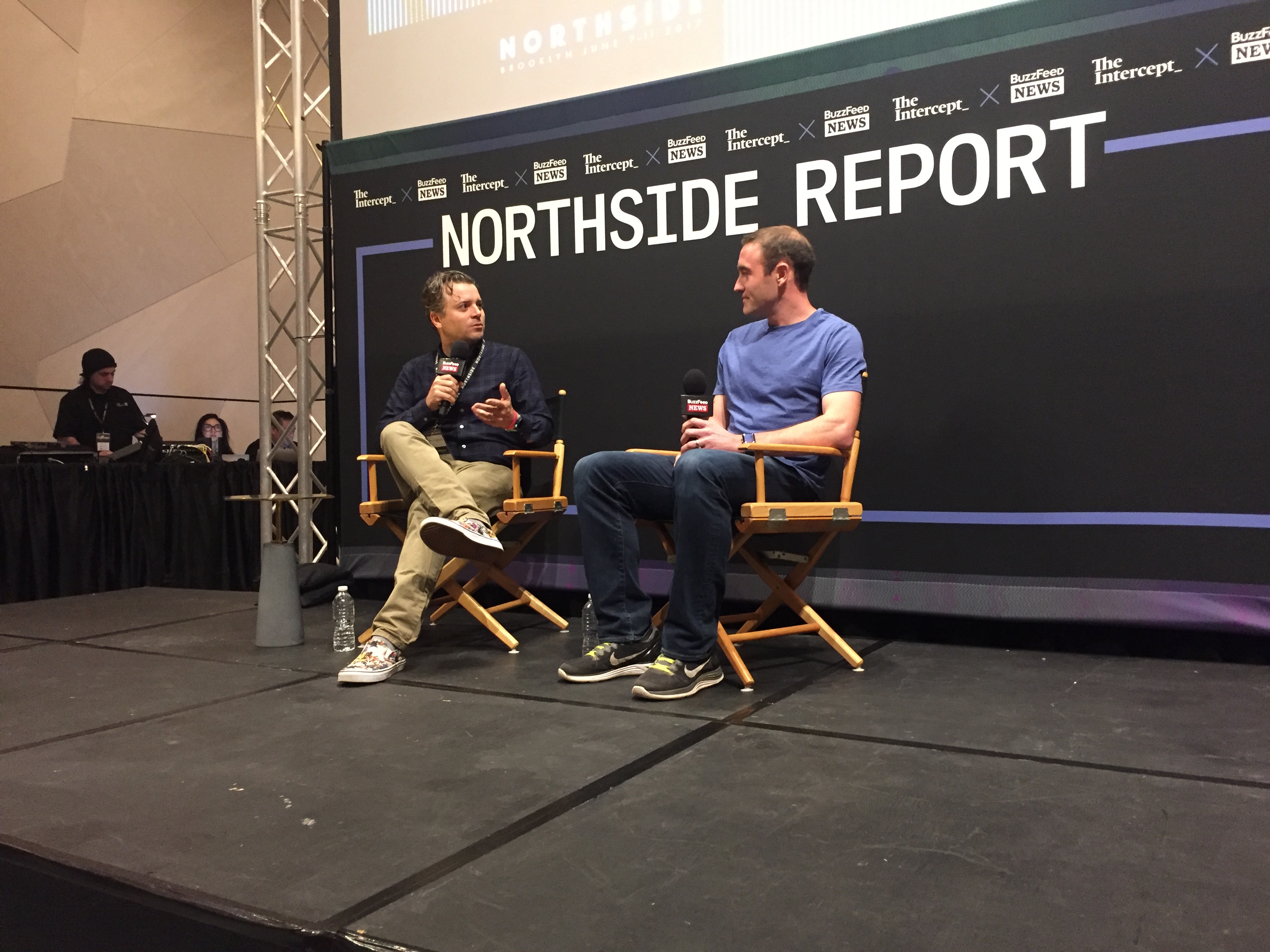 There’s a young woman sitting across from me in a small room, empty and dimly lit by an overhead light fixture. Like me, she’s wearing a virtual reality headset. The eerie electronic music that’s playing in the background begins to crescendo, and suddenly she’s crouched down on the ground, hands over her head, writhing in agony. I look around and realize that there are other people here like the woman, like me, trapped in a matrix-like prison of glass cages – all wearing VR headsets, and seemingly consumed by the experience in which they are immersed.

What I’m seeing is part music video-part VR experience, set to British electronic artist Clark’s new track “Hoova.” The dystopian experience claims to investigate the topics of isolation, dependency and identity in virtual reality. And it’s one of many experiences that attendees of the recent Northside Festival in New York City could try out mixed-media reality and tech products. Northside, which the New York Times dubbed “Brooklyn’s answer to South by Southwest,” played host to thousands this year during the annual technology and music festival. Here are some of the highlights:

A festival-goer has his body scanned in 3D at the Immersive Playground at the Northside Festival. Photo by Bianca Fortis.

There were panels galore about the future of augmented and virtual reality – including one actually titled “How Do We Get People to Like VR?”

The key to the widespread use of AR and VR is to make it playful, according to several of the experts.

“Everyone talks about content creation, and that’s great,” Martina Mrongovius, the co-founder of the Center for the Holographic Art, said. “But if no one engages, what does it matter?”

Case in point: SwapBots CEO John Keefe showed off a prototype of the toys that, when placed in front of the SwapBots app, transform and “come to life.” Both he and Jeremy Kenisky, vice president of Merge VR, which designed the Merge Cube, a toy that lets the user “hold” a hologram while using a VR headset, said their companies regularly invite children to their offices to test their products.

Lex Dreitser, a VR app developer, said making the technology playful has universal application across all cultures – because we’ve all been kids.

Perhaps proving that point, in another VR panel, Ari Kuschnir, the founder of production company mssngpeces, discussed the groundbreaking VR documentary about the NBA that was released last year. A lot of VR headsets were sold when it was released, he said.

While VR and AR evangelists have expressed worry about future revenue streams, but Dessy Levinson, the Vice President & Head of Story at 645 Ventures, said the key will be engaging content.

“People will pay for content – if it’s good,” she said. “They paid to rent movies and for music on iTunes.”

There’s a persisting belief that it’s on humans to become computer literate. But, in fact, we’re going about it the wrong way, says Michael Nicholas, the co-founder of Born AI: computers need to become human literate.

Nicholas referenced SmarterChild, an early AI bot that was on the buddy list of millions of AOL chat users in the early 2000s. There’s a significant difference between the bots of yore and the AI bots that are being used today: while SmarterChild spoke in pre-written scripts, today we have natural language intelligence which can help AI better understand humans. Bots that can understand – and help – us are called agents, Nicholas said.

“It’s less virtual assistant, more virtual specialist,” he said. “It’s about having a relationship with something you can trust.”

From left to right: Shani Hilton of BuzzFeed, Lydia Polgreen of HuffPost, Sam Dolnick of the New York Times and Melissa Bell of Vox. Photo by Bianca Fortis.

While Instagram may have started as a photo sharing platform, the company’s objective now is to strengthen relationships around the world, according to Kevin Weil, Instagram’s Head of Product.

The app now has more than 400 million daily users, and more than 200 million people use Instagram’s new Stories feature, Weil said. The fastest emerging markets are in Asia and India. During an interview with BuzzFeed’s San Francisco Bureau Chief Mat Honan, Honan needled Weil about Instagram’s apparent copying of Snapchat features, including Stories and augmented reality filters. In response, Weil pointed to Mosaic, an early internet web browser, and asked whether internet users should still be expected to use it.

“Being first is important,” he said. “And we’re good about giving credit where credit is due. “But being first isn’t everything.”

For many users, Instagram isn’t just a place to post any old photo – feeds have become galleries where users show “highlights” of their lives, and the Stories feature allows users to share in-between moments without having to add something to their feed they may not want in six months. Ephemerality is freeing, he said.

“Most of your life happens between your highlights,” Weil said. “It’s about strengthening relationships with those small, silly daily moments. The Stories feature was a pressure release valve.”

And while the distribution of content via social platforms invite a host of problems for news organizations, New York Times Assistant Editor Sam Dolnick (and member of the Ochs-Sulzberger family that owns the paper) said during another panel that it’s because of those platforms that those organizations have so many readers. The Times’ audience before the platforms wasn’t half as big as it is now, he said. There are millions of people reading and reading immediately. Platforms also allow news organizations to expand their audiences – including to teenagers.

“I have 14-year-olds who know Vox because of Snapchat,” Vox Publisher Melissa Bell said. “It’s great to see platforms pushing us in those directions. We’re re-thinking how we create editorial content.”

HuffPost Editor-in-Chief Lydia Polgreen said she spends all her time thinking about how to make news for people who don’t really care about the news or who aren’t tuned in.

“Platforms are an important way for us to worm our way into the lives of people who don’t feel served by the news ecosystem,” she said.

Bell said the crisis facing the journalism industry won’t be solved with a few product solutions and quick fixes. We need a total transformation, and we’re in the midst of it, she said. But ultimately, the panelists also said that audiences still engage with big investigations and other deeply reported stories.

“Basic reporting, verifying facts, getting sources to tell you things they’re not supposed to – those things from a generation ago are not out of fashion,” Dolnick said. “Traditional get-the-facts journalism still matters.”

We’ve entered a second golden age of audio if you ask Alex Blumberg, Co-Founder and CEO of Gimlet Media. During a conversation with Snap Judgement Host and Executive Producer Glynn Washington to discuss the future of radio and podcasting.

Blumberg said podcasting allows creators to make stories that are serialized or stories that only appeal to certain groups. The cost to entry is very low and allows cheaper experimentation that other mediums.

“A movie can take three years,” he said. “It takes at least a year-and-a-half for a TV pilot. We can do a story in two days – or even three hours. The water is warm in the pool, and I think people should jump in.”