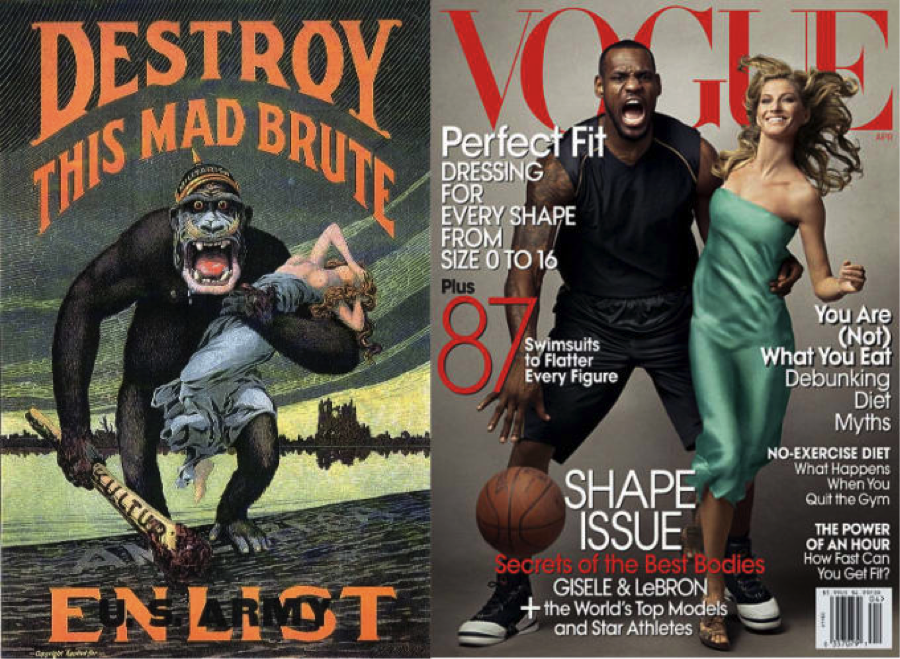 I teach race and gender and media to undergraduate students in public communications (e.g., advertising, journalism, television/radio/film). The value of this class is evident in the abundance of stories about companies producing content that is likely uninformed, often ignorant, and occasionally outright discriminatory towards historically marginalized groups.

Consider the Vogue 2006 cover photographed by Annie Liebowitz featuring Lebron James and Giselle Bünchen staged to look like an anti-Black propaganda poster from World War I. This issue was printed and distributed before anyone picked up on the racist parallels. This means either no one noticed the historical symbolism or no one said anything.

Practicing professionalism while calling out injustices is a skill that must be acquired if new generations of media producers are to impact the media industry.

These incidents occur faster and often with greater fallout with digital media; the need for clicks means that more content is published with less oversight. An offhand tweet, shared individually or as part of a larger campaign, can go viral and metastasize into a public relations crisis, especially when the response or apology further aggravates the problem by continuing to disregard or ignore the larger historical context. Consider some examples in recent memory: KLM World Cup Tweet (2014); Justine Sacco (2015); AZ teenagers spell racial slur (2016).

Making students more aware or “woke” will only go so far. Students must practice discussing these complex issues if they are to affect change and disrupt discourse in the real world while maintaining their employment. My students write professional emails that describe the issues and suggest solutions using the theories, language, and overall knowledge learned in media diversity classes.

Practice Talking Back to Power

This assignment asks students to consider a digital media artifact that exemplifies an issue pertaining to class, gender, sexuality, race, or religion, and write a persuasive essay (i.e., less than 750 words; 5-6 paragraphs) via email. Artifacts can include any content that was created for distribution (e.g., image, video, tweet, article) in order to affect change from within the production pipeline; an off-hand comment caught on a hot microphone is not eligible, but the subsequent public apology would be.

Imagining themselves as a new employee at the company producing this content, they write emails to their immediate supervisor explaining why the content is problematic (i.e., perpetuating discrimination) or progressive (i.e., disrupting discrimination). Discussing historically progressive content is valuable as stakeholders concerned with “alienating the base” may be wary of being too progressive. In the real world, students may have to explain why casting a Black couple as an “all-American couple” (diverse casts) or featuring a same-sex couple as “wholesome” (LGBT rights) would be a good decision for the company. As the reader, I put myself in the position of a chief officer who is primarily interested in the bottom line and skeptical of new employees. Therefore, the student must explain the issues at hand clearly, concisely, and professionally.

This assignment encourages students to (1) explore why certain content may be inappropriate, offensive, or valuable to certain audiences by applying key terms and theories from class to current content, (2) suggest strategies that avoid or address potential public relations crises, and (3) practice constructing clear and concise arguments that are grounded in theory, culturally aware, and professional, eliminating casual or conversational terminology.

Although this may seem obvious, issues often arise because something was simply “not noticed.” Students must objectively draw the reader’s attention to relevant components and the larger context before they can begin their analysis. Describing the artifact includes both the general narrative, as well as the nuanced, often missed aspects: racial casting choices, a loaded word or metaphor, or even a joke.

Describing the artifact in detail is also helpful for readers (including the instructor) who may not be familiar with the artifact; a well-written email can trickle up the chain of command, reaching a stakeholder who has an impact decision-making, but may not have been involved in the production.

This section is graded on the clarity of the description. Producers can become habituated to, or fail to notice, certain aspects of the content in the editing process and therefore the reader must be able to envision all aspects of the artifact (e.g., the race of the onscreen actors, the background music, the editing) before reading the critique.

To demonstrate the context that makes an artifact problematic or progressive, the writer must connect the description of the artifact to important, and often underrepresented, trends. This involves explaining cultural differences, historical events, long-standing stereotypes, statistical disparities and public rhetoric. Content producers may be ignorant of, or blind to, connections that are perpetually salient for others. Given the hegemonic emphasis on certain histories (e.g., White, Anglo Saxon, Protestant, Male), the same content may be interpreted differently between audiences.

This section is graded on the clarity of the analysis, concise applications of key terms and readings, and making relevant connections evident for someone unfamiliar with the artifact’s historical context. The language of diversity is not widely understood, and terms common in the academic lexicon (e.g., trigger, microaggression, institutionalized discrimination, hegemony) are absent or misused in public discourse. Therefore, students must make these complex ideas accessible to someone who has not taken the class. It is not sufficient to say that something is offensive and hope that the reader will understand and agree; instead, the student must demonstrate how the content is offensive, and how it perpetuates or disrupts a long history of discrimination and disparities.

Although evaluations (i.e., Is it good or bad?) dominate assessment of media content among consumers not trained in media literacy, these personal responses do not affect change alone. The ability to provide solutions to problems is an indispensable trait for media producers.

This section of the assignment is graded on the quality of the solution in its feasibility (i.e., without alienating their base/core consumers or the bottom line) as well as its ability to disrupt discourse through content creation.

What you “meant” doesn’t matter.

Problematic content is often dismissed with claims that the offensive content was “not intended.” Content can be problematic (or progressive) when it is not intended as so, and this is not a valid excuse. I tell my students that, as a professional communicator, it is not acceptable to say, “That’s not what I meant” — it is your job to know what you mean and how others will interpret your messages. It is also your job to be able to explain these complex issues to others who have not taken diversity classes.

Practicing professionalism while calling out injustices is a skill that must be acquired if new generations of media producers are to impact the media industry. This is a delicate balance given the increasing casualness of communication technology like text messaging and blogs, and the quickly disappearing nature of professional communications. The goal of this activity is to foster aware and active media contributors, creators, and consumers that can affect media practices in nuanced and valuable ways. In the workplace, these skills can help future media contributors, creators, and consumers be successful and promote a diverse media environment.

Regardless of whether the email is sent, practicing critical thinking and explaining complex historical issues to someone who does not share the same knowledge or attitudes is an essential skill for public communicators and will improve public discourse.