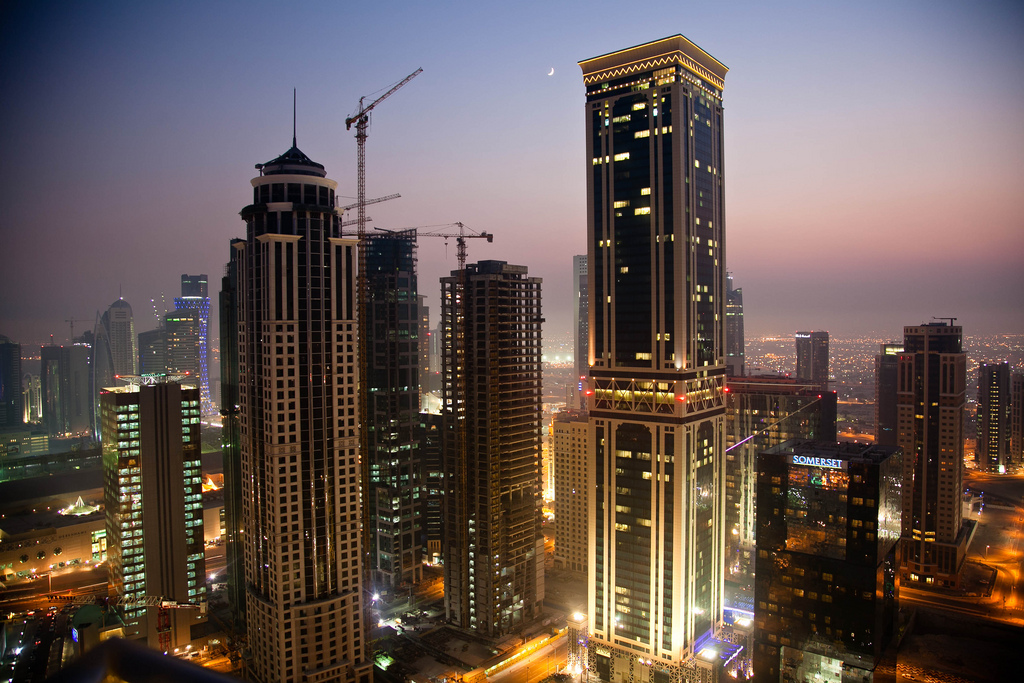 A growing number of Arab region states have decided to sever diplomatic ties with Qatar. Photo by Omar Chatriwala on Flickr and used with Creative Commons license.

The decision of a growing number of Arab region states to sever diplomatic ties with Qatar will affect trade, travel and security alliances. It will also affect free speech.

On the heels of their announcement, government officials in the UAE and Saudi Arabia issued warnings that any citizen who expresses sympathy or support for Qatar via social media could face jail time or exorbitant fines.

Al Arabiya reported that Emirati General Prosecutor Hamad Saif Al-Shamsi warned that such expressions would violate the UAE’s cybercrime law, and could warrant a maximum of 15 years in prison or at least 500,000 dirhams (USD $136,000) in fines.

Although they may sound extreme, these punishments fall within the bounds of the UAE’s cybercrime law, which prescribes imprisonment and fines for those who publish online news, cartoons and pictures that “may endanger the national security and the higher interests of the State or afflicts its public order” (article 28), and content deemed “damaging” to the “the reputation, prestige or stature of the State…” (article 29).

SaudiNews agency tweeted that offenders in the Kingdom of Saudi Arabia could face up to five years’ jail time or fines of up to three million Saudi riyals. This would fall under Article 6 of the country’s 2007 cybercrime law which bans “material impinging on public order,” a local lawyer told the Saudi newspaper Okaz. According to the same newspaper, those expressing support for Qatar online could face up to ten years in jail under Article 7 of the cybercrime law for “promoting terrorism”.

On 8 June, Bahrain followed in the footsteps of the UAE and Saudi governments by threatening users showing any sympathy with Qatar, or expressing objection to the severance of diplomatic ties, with legal action. Bahrain’s Ministry of Interior says users could face up to five years in jail and a fine under the Penal Code.

Exiled Emirati activist and blogger Iyad el-Baghdadi, who is a leading voice on human rights and free speech issues in the Gulf region, tweeted:

Arab regimes all over the Arab world are using this latest crisis as another excuse to go after independent voices.

Photo by Drouyn Cambridge and used with Creative Commons license.

A human rights activist is facing charges of defaming the military under Myanmar’s Telecommunications Act after he live-streamed his son’s performance in a school play on Facebook. Entitled “We Want No War,” the play was critical of military clashes with armed ethnic minority groups. Nine of the students involved in the production, a mix of high school and university students, have also been sued for defamation. The activist, U Tun Tun Oo, is the leader of the Human Rights Activists Association in Pathein township.

Myanmar Facebook users reported posts containing the word ‘kalar’, traditionally used to refer to people of east Indian origin, are being censored by the company. Radical nationalist movements have started to use the term kalar with a derogatory connotation to attack Muslims, including the Rohingya minority in the northwest part of Myanmar. This blanket measure has caused Facebook also to censor posts in which users discuss the context and use of the term, as well as completely innocuous posts that contain the same string of characters while spelling out completely different words such as chair (‘kalar htaing’ in Burmese) and split pea (‘kalar pae’). The incident sheds light on the pitfalls of using technical censorship of specific words rather than contextual information in efforts to curb hate speech.

Access to the messaging app Telegram was temporarily blocked in Russia following a guerilla campaign launched by Dymoff.space, a domain that is on the blacklist of media regulator Roscomnadzor. The site was able to pass off Telegram and several other website’s IP addresses as its own, leading ISPs to unknowingly block Telegram when they added Dymoff.space to their block list.

Photo by Mariano Mantel on Flickr and used with Creative Commons license.

Russian social network Vkontakte lifted a ban on political advertisements, though there are still restrictions that will likely favor the existing political establishment. Vkontakte will sell ad space to political candidates and parties officially registered with Russia’s Central Election Commission. It will not offer ad space to unofficial candidates and opposition groups who are denied registration by the government, including prominent opposition leader Alexey Navalny. Advertising of a political nature is otherwise banned by the social network, including the dissemination of “opinions about political events”.

Internet companies are planning a major day of action to support the 2015 rules passed by the US Federal Communications Commission to protect net neutrality. Trump administration FCC commissioner Ajit Pai pledged to roll back the rules, arguing they stifle innovation. In response, companies including Amazon, Etsy, Kickstarter, Mozilla and Vimeo plan to a joint action of support for July 12.