Want To Reach A Chinese Audience? 10 Tips For Using WeChat 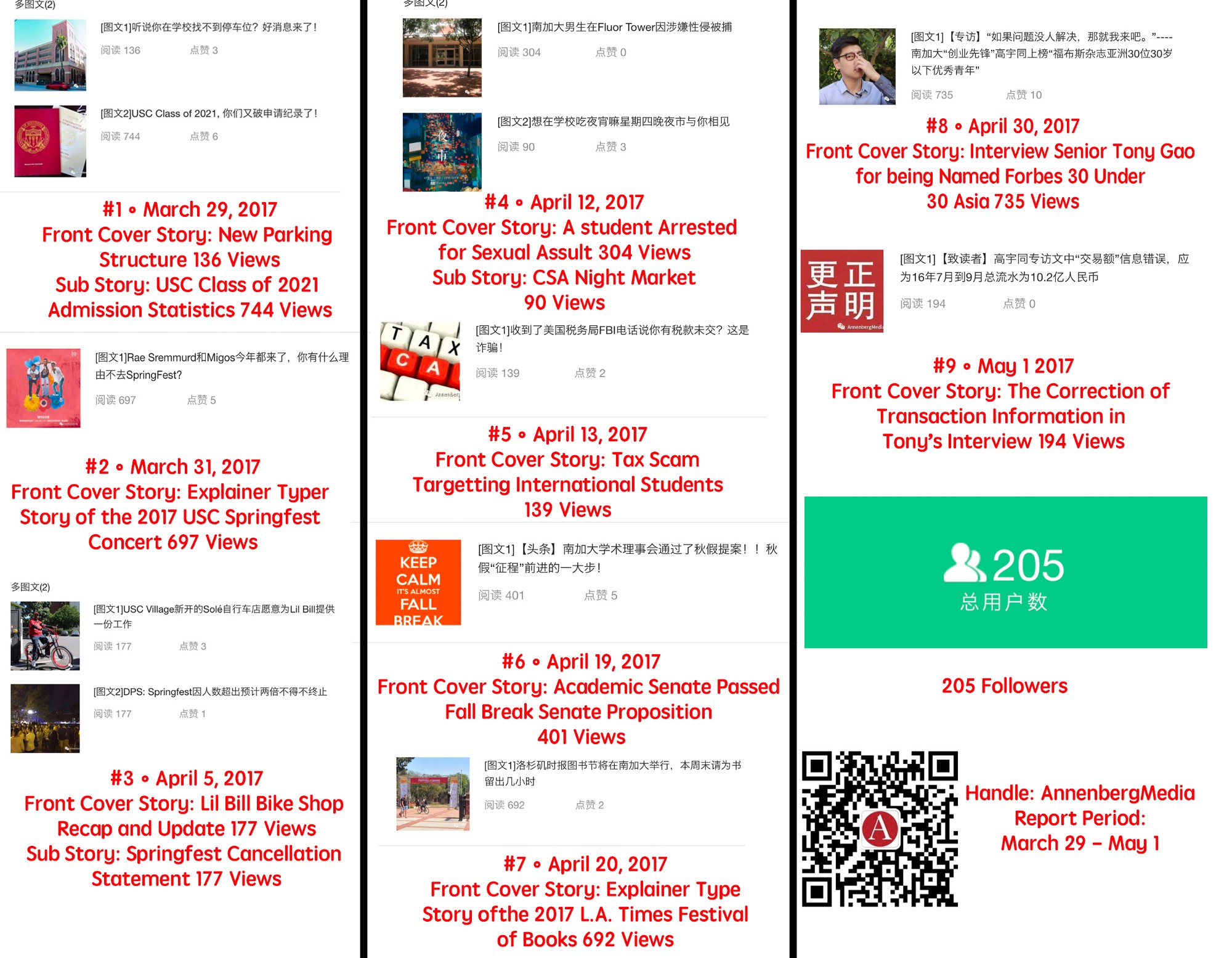 Each story is label and has its updated views on it.

This post was originally published by the Media Center Lab.

Film, music, advertising — all these American media fields have recognized the value of the Chinese market. Notice you don’t see the American news industry on that list. I’m from China and use WeChat every day, but I don’t see a lot of content there that reflects what I’m learning to produce as a journalism student at the University of Southern California. So when two of my professors asked me if I wanted to launch a WeChat account for USC’s student-run news outlet Annenberg Media, I was pumped.

In case you’re not familiar, WeChat is most popular messaging app in China, with more than 768 million users logging in daily, according to numbers the company released at the end of 2016. With 889 million monthly active users, it’s also one of the most popular chat apps in the world. I would describe WeChat as a combination of Facebook, Messenger, Twitter and Venmo. You can do a lot on WeChat, and as a result, the audience there is very engaged. WeChat reports that half of its users spend at least 90 minutes a day on the app.

So should your news organization dive into WeChat, and if so, where do you start? Here are some tips based on my experience running the account for Annenberg Media.

Originally, WeChat was designed as a chat app that allows users to send texts, voice messages, pictures, video and location pins. Like I said, WeChat contains elements that are familiar to Facebook users, such as the “Moment Wall” where users post status updates and stories. WeChat is also like Venmo in that it allows users to transfer money. For many China, it’s not an app, it’s the app, facilitating many activities that Americans use multiple apps for.

If you want to have a branded page on WeChat, you register an “Official Account,” which is kind of like a Facebook page. However, since WeChat is a chat app, after all, the relationship with readers is more like running a Facebook Messenger account. When the Official Account sends out a message, your followers get pinged like they would on Messenger. And just like on other messaging apps, you can reply privately to Official Accounts. More on that in tip #4.

Just like other social networks, WeChat can be a place where rumor and bias spread. In my opinion, there needs to be more upstanding news organizations on the platform, which is one reason I wanted to start the account for Annenberg Media.

2. Get to know your potential audience.

WeChat was an obvious choice for Annenberg Media. Nearly a quarter of the USC student body is from outside the United States, and Chinese students make up 44% of that international student population. To learn more about them, we created a Google Form, written in English and Chinese, that we distributed to students through USC’s Chinese Students and Scholars Association. Here are some of the questions we asked, along with the results.

What readers expect to read?

As you can see, the vast majority of the survey respondents wanted to receive news on WeChat in both English and Chinese. We decided to publish in both languages, putting the Chinese version of the story first, followed by the English version. In our newsroom, I write stories in English to be read by an editor who doesn’t speak Chinese, then I translate them. Find a workflow that works for your newsroom.

3. Once you’ve learned more about your audience, figure out how to best serve them.

Before I launched Annenberg Media’s WeChat account, I knew that Chinese students weren’t very informed about what was going on on campus because few of them were consuming Annenberg Media’s content or the school’s newspaper, the Daily Trojan. For example, a story about a bike shop owner getting kicked off campus was going viral among my American friends at school, but very few of my Chinese friends knew about it. And when I pitched a story for WeChat about the Los Angeles Times Festival of Books, which was on campus in April, my professor asked, “Would Chinese students be interested in attending the book festival?” I responded: “It’s not about whether they are interested in the book festival. I was asked by my Chinese friends why there were so many white tents on campus [for the setup]. They do not even know there is going to be a book festival.”

That’s one way of thinking about one of the goals for our account: To just let people know what’s going on in their community when they might not otherwise be aware.

Another key aspect of Annenberg Media’s WeChat account is that it’s not just aimed at Chinese students on campus. As a student from China, I know parents there are eager to know what is going on at USC and in Los Angeles. But their children don’t always keep them up to date. Instead, parents get information from WeChat chat groups and news accounts targeting at international students studying in America. But these forums are often home to rumors and outdated news.

I knew going in that Chinese parents could make up a big part of our WeChat audience. And I was right: They were the first to follow our account and are now the largest portion of our audience. I think it’s important to provide them accurate and unfiltered information about USC — and the same goes for prospective students in China.

4. Now that you know who you want to reach and what you will provide them, launch the account!

The way you set up your WeChat account affects the audience you can reach. If reaching an audience in China, or reaching Chinese citizens, is important to you, register an Official Account in WeChat’s Chinese interface if possible. (WeChat offers English and Chinese administrative interfaces.) If you don’t, WeChat users who registered their accounts in China won’t be able to access your account.

For example, here’s a search for “BBC News” on an account registered with Chinese citizenship and an account registered in the U.S. The type of registration affects which accounts you can see. The reason for this, as you might have guessed, is media censorship in China. (This also means Chinese accounts risk suspension for posting about certain topics, such as the Tiananmen Square protests or the Dalai Lama.)

Registration in the Chinese interface requires a Chinese citizen identification number, a Chinese cellphone number and a WeChat account linked to a Chinese bank account.

Once you’ve registered your account, you will choose the account category. “Media” might seem like a good choice, but you need a Chinese company license number to be approved. If you don’t have that, you can register as a personal account, which the category that Annenberg Media chose.

Designate an account manager. The account manager is the only one with the authority to add other account editors, grant permission to others logging into the account interface and to give final approval to sending stories.

Any editor wanting to access the organization’s WeChat account can log in with an email and password on desktop. This will trigger a QR code to scan in your WeChat app. That will prompt an alert for the account manager, who can then grant or deny access. (The desktop interface is in Chinese for accounts registered as such, but for non-speakers, Google Chrome translate is a workable solution.)

The account manager is also the only one able to get on the official account from his or her phone. However, on the phone interface, the manager can only reply to followers’ messages and send out finished posts, images and texts.

5. When you start posting, vary your formats.

The WeChat formats are: posts, images, voice messages, text and video. Posts are the only format that allow readers to share with their friends or on their Moment Wall. Thus, posts, such as the nine you see in the series of screenshots at the top of this post, are the most frequently used. They’re time-consuming to produce, though.

Images, voice messages, text and video are formats that followers are not able to share. They are easy to compose and are great for short stories. Here are some examples of when Annenberg Media used them:

Based on Annenberg Media’s experience, I recommend not using video when a text-based summary will do. For example, when we used a 45-second clip within a story in one post, only 9 of 139 viewers watched it.

Remember that WeChat is primarily a chat app, and readers are sacrificing their chatting time to read news stories. When they are reading posts, readers cannot receive chat notifications. So make their time worth it and help them get through stories quickly.

You can use bold or color highlights to emphasize important information in the story and divide the story into sections (just like this post!). I’ve found that 14-point font is a good size for posts because it displays well on phones.

7. Be extra careful! Unlike other social platforms, you can’t immediately correct mistakes

Remember when we thought for a few minutes that “La La Land” won the Oscar for Best Picture? American news outlets had to update tweets and push notifications — which is enough to give a news editor nightmares. But Chinese outlets on WeChat that shared the news immediately after the mistaken announcement couldn’t fix it for 24 hours.

That’s because official WeChat accounts are only allowed to send information to their followers once per day, in 24-hours cycles according to the Chinese time zone. Moreover, once a story is out, you can’t edit it.

This doesn’t mean that you can only send one story per day, though. You can group up to seven stories for one update. However, I recommend about three or four stories per post. Here’s what a group of stories looks like:

The WeChat administrative interface offers analytics on how your posts are performing. Since you only have one shot each day to post, I looked at Annenberg Media’s analytics to figure out the ideal time for us.

9. Make sure your headlines and summaries are social media-friendly.

Just like on other social platforms, these elements are very important. When people share posts with their friends or to group chats, the headline and summary are only things that people will see before they tap the story. For the Moment Wall, the headline is the only thing that’s displayed.

In this example, I added three menu items: “Breaking News,” “NFL” and “Interview.” You can link directly to other stories or to a sub menu. I put another story in the “Interview” tab, and I made a sub menu for “Breaking News.” Each item in the sub menu links to one of our stories.

This function allows you to greet users when your editors aren’t available to communicate with them. Here’s an example of a greeting you get when you follow the Annenberg Media account:

When people send us a message, they receive this reply:

Beyond a standard automatic response, WeChat allows you to provide answers for specific keywords. Here’s what happens when someone messages us “NFL”:

Running a WeChat account requires a lot of work and thoughtful deliberation. But it has been rewarding for me to see how we impact our audience. The story about the book festival on campus, for example, got 692 views when we only had about 150 followers. It has been a pleasure to inform more and more Chinese students at USC about what is happening on campus. It fulfills the mission and purpose of this platform. I hope you can find similar satisfaction if you decide to launch on WeChat.

Kaidi Yuan is a student at the USC Annenberg School for Communication and Journalism.