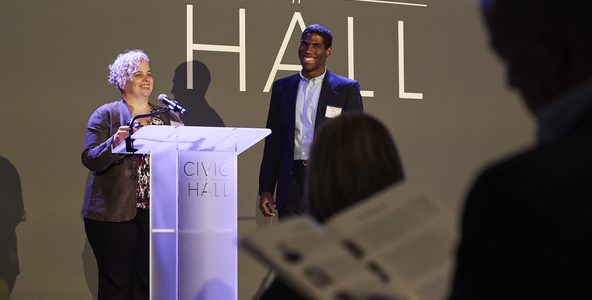 In the news this week, President Trump’s first budget strips funding for the Corporation for Public Broadcasting, which could be devastating for small market local public stations. The Feds indicted four Russians for the massive hacking breach at Yahoo in 2014, compromising data for 500 million users. And European governments throw down the gauntlet for Facebook, Twitter and Google over hate speech and fake news. Our Metric of the Week is Snapchat Filter Metrics, and Jessica Clark of Dot Connector Studios joins us to talk about helping the Knight Foundation study their podcasting investments.

"It's a classic story of disruption. It's a lot easier for nimble, single-purpose organizations to go out there and innovate in a new environment." - Jessica Clark on why NPR's podcasting efforts are lagging behind compared to companies like Gimlet Media.

Once again, Big Bird might be an endangered species. President Trump’s proposed budget would eliminate the Corporation for Public Broadcasting, which supports PBS, NPR and local public stations around the country, as well as the National Endowment for the Arts, and National Endowment for the Humanities. CPB’s Federal funding comes to about $500 million annually, or $1.35 per person in America. The CPB’s CEO Patricia Harrison said that “the elimination of federal funding to CPB would initially devastate and ultimately destroy public media’s role in early childhood education, public safety, connecting citizens to our history, and promoting civil discussions for Americans in rural and urban communities alike.” Forbes’ Madeline Berg said that a 2012 CPB report estimated that eliminating federal funding at that time would have put stations in 54 markets in 19 states at risk of shutting down. Most statements about the loss of funding noted that rural and small markets (typically in Republican strongholds) would be the hardest hit.

This isn’t the first time that CPB funding has been threatened. Ronald Reagan wanted to strip funding but the House majority was Democratic at the time. 2012 GOP presidential nominee Mitt Romney once said, “I like PBS. I love Big Bird. I’m not going to borrow money from China to pay for it.” Because of these past battles, many larger local stations and NPR and PBS have brought in more revenues from corporate sponsorships, memberships, and other sources. NPR now gets only about 1% of its budget from the CPB. And this is only the first shot in the battle over public media funding, as Trump’s budget is only an outline, a plan, a set of wishes that still needs to be approved by Congress. And though many Republicans like to talk about stripping away funding for public media — Trump tweeted that public radio was “basically a commercial for Hillary Clinton” — the reality is that public media, especially children’s programming, is hugely popular across the political divide. The battle has only begun.

Was state-sponsored hacking behind the massive security breaches at Yahoo? Yes. Is Russia’s Federal Security Service working in tandem with criminal hackers? Yes. These are the explosive findings from the FBI as the Department of Justice unsealed four indictments against two FSB agents and two Russian hackers for compromising data from 500 million Yahoo users in 2014. The investigation took two years, and Yahoo CEO Marissa Mayer was vindicated in saying that the hack had involved state-sponsored cyber-crime. Of course all this is happening as a backdrop to the larger narrative of Russia hacking and meddling in the U.S. presidential election last year, while associates of President Trump, including current attorney general Jeff Sessions, are being called out for Russian contacts over the past year.

According to the Feds, this scheme included the Russian government using the data to build dossiers on U.S. government officials, Russian dissidents and journalists. Meanwhile, the hackers were able to use the data for spam and phishing schemes. While the U.S. government can’t apprehend the FSB agents or one hacker who’s in Russia, they were able to capture one hacker, Karim Baratov, who was arrested in Canada. The indictment does help “out” the agents and limits their travel outside of Russia. For Yahoo, it helps the troubled company move somewhat beyond the huge data breach, even though it lost $350 million in the Verizon buyout. As Politico’s Eric Geller points out, it’s the third time the Feds have indicted state-sponsored hackers, with previous efforts against Chinese and Iranian hackers. The question is what will happen with the investigation into the election-related hacking and who will ultimately take the fall.

If tech companies didn’t have enough reason to combat hate speech already, then European governments are going to help. This week British lawmakers took Facebook, Google, and Twitter to task for not doing a better job of policing their platforms for abuse and hate speech. The tech giants had representatives testifying in Parliament, saying that they depend on user-generated complaints. But lawmakers said they weren’t going far enough, and Labour Party member Yvette Cooper noted that terrorist videos on YouTube were bringing in ad revenues, and four tweets calling for violence against public officials hadn’t been pulled down. Nick Pickles, head of Twitter’s public policy in the UK, apologized to Cooper for the issue, and noted that Twitter had been improving its reporting measures. But one Labour Party member David Winnick told the execs that they were engaging in “commercial prostitution” and he would be ashamed to earn his money that way.

This comes after the BBC’s Angus Crawford reported that Facebook had been missing images of child abuse that had been reported on the platform. When Crawford sent Facebook screen shots of the images, Facebook actually reported Crawford to the authorities. Eventually, Facebook admitted there was an issue with the comments next to the images and that it had fixed a problem with its reporting tool. Separately, Google has been improving search results with its army of 10,000 contract “quality raters,” according to Search Engine Land’s Danny Sullivan. They’ve been using a new tag called “Upsetting-Offensive” to root out hate speech and misinformation. Meanwhile, in Germany, the government is considering a more drastic measure to deal with hate speech, illegal content, and fake news online. Social media companies like Facebook and Twitter would be fined €50 million — about $53 million — for failing to remove such content within a certain time frame. The proposed measure would give companies a week to delete offending material while illegal content would need to be deleted in 24 hours. How tech companies would be able to catch all the offending material is still unclear, but this proposed law would definitely bring the issue to the fore. Already, Facebook is expected to employ 700 people in Berlin to sift through all of the posts deemed suspicious in the run-up to national elections there.