What I Learned By ‘Hacking’ Chatbots 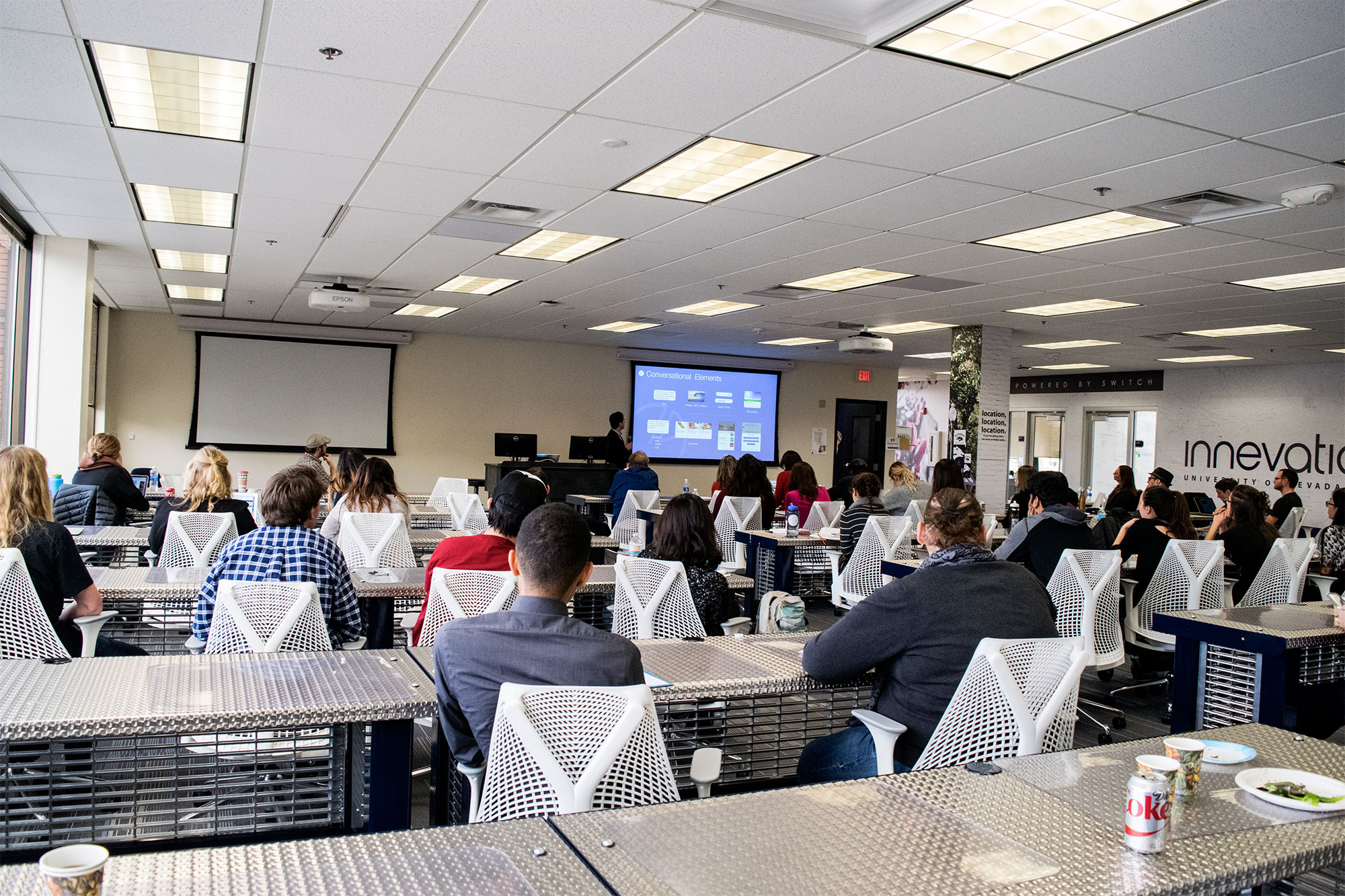 I’ve never been to a Hackathon.

Last weekend I got to do both.

MediaShift and the Reynolds School of Journalism partnered to present the 4th Annual MediaShift Journalism School Hackathon, where teams of students and faculty mentors teamed up to create and pitch a startup idea around chatbot technology.

Students chat at the Hackathon. Photo by Krysta Scripter / The Reynolds School.

The focus of last weekend’s event was on chatbot technology, and how newsrooms and media organizations could potentially use them. No coding was required to be a part of the event. Thankfully, I wasn’t the only one who had no idea about to build a chatbot. Like other students, I also knew very little about what chatbots did.

Students were divided into teams with one facilitator and several floating mentors. When not working, speakers from ProPublica, USC Annenberg, and Facebook, shared insight on how to make chatbots, human centered design, and asking for money from investors. I was grouped with Lisa Huynh, a graduate student from USC, Peter Opa, a journalist from Africa, and our facilitator, Courtney Cowgill, an adjunct professor from the University of Montana.

My biggest fear going in was that I was going to be assigned to a team didn’t know what to do, or how to collaborate. I envisioned a silent team huddled around a table, laptops open, with half-hearted mumbles of “I don’t know, what do you want to do?”

My other fear was that the deadline would stress me out and make it impossible to think clearly.

Thankfully my concerns and anxieties were unfounded. While my team was the smallest, we worked well together and made good time on our project. We outlined clear to-do lists. We worked efficiently and  listened to each other.

At first there was a moment of: “Well, what are we going to do?” Getting past that was the hardest part. We listed every idea we had on post-its that we placed on a whiteboard. Then we narrowed it down to two. We decided the idea with a final vote

Our idea was dubbed Kind Eats, a bot inside Facebook Messenger linking neighbors to share food and meals in order to combat food waste. After lunch, the team piled into my car and quickly ran down to Circus Circus to market test our idea with a short survey.

Lisa and Peter pick and choose post-its that decide our final idea. Photo by Krysta Scripter / The Reynolds School.

People responded well. Our results showed that people were willing to receive food from a neighbor or deliver a meal to someone who needed it.

The hardest part about our idea was coming up with how to get revenue, even if it was a non-profit bot. Cowgill reminded us: “Non profit doesn’t mean no revenue.” She encouraged us to think creatively about fundraising efforts, partnering with local food banks, and applying for grants.

Our team went out into the field to get survey data for the Hackathon. We used candy as an incentive to fill out our survey. Photo by Krysta Scripter / The Reynolds School.

I used to be really nervous about public speaking. I felt really confident about our proposal though. I believed we had an idea that was going to do good in the world. That helped.

The other fives teams had equally innovative ideas. My personal favorite was a bot that reinterpreted news material in a way that easy to comprehend for readers with dyslexia. Not only did it use technology in a creative and innovative way, it also addressed news and media, which few groups did.

The heroes of the weekend were the team behind a money management bot designed specifically for millennial spenders. I thought our idea had serious potential, and I’d be lying if I said I wasn’t disappointed.

The winning team at the MediaShift Hackathon. Photo by Krysta Scripter / The Reynolds School.

In hindsight however, I can’t blame the judges for choosing the millennial-money-management team. Our financial plan wasn’t rock-solid and I think our concept wasn’t as thorough as the others.

Overall, the experience was meaningful and eye-opening. I’ve never drafted a business plan before. I’ve never proposed a  business to potential investors. I’ve certainly never had the opportunity to pick the brains of somebody who worked on the Facebook Messenger app, or the business development professional from ProPublica.

The panel of judges, including Colin Loretz, Dusty Wunderlich, and Brian Burghart. Photo by Krysta Scripter / The Reynolds School.

The MediaShift Hackathon let me do all of that. The skills I learned are skills I’ll continue to use in my career, whether I stay in journalism or try my hand at entrepreneurship. Working with a team, communicating an idea, and pitching a business plan are the kind of things you need to do to truly understand.

Who knows, maybe someday I’ll partner with my team again, and we’ll see just how successful we can make Kind Eats. I still have that powerpoint, after all.

This piece first appeared on the Reynolds School of Journalism at the University of Nevada-Reno’s page and is cross-posted with permission.

Krysta Scripter is a journalism student at the University of Nevada-Reno, where she is the multimedia writer for the Reynolds School of Journalism. When not writing or photographing, she’s probably listening to video game soundtracks.