What Can Data Tell Us About Breitbart? 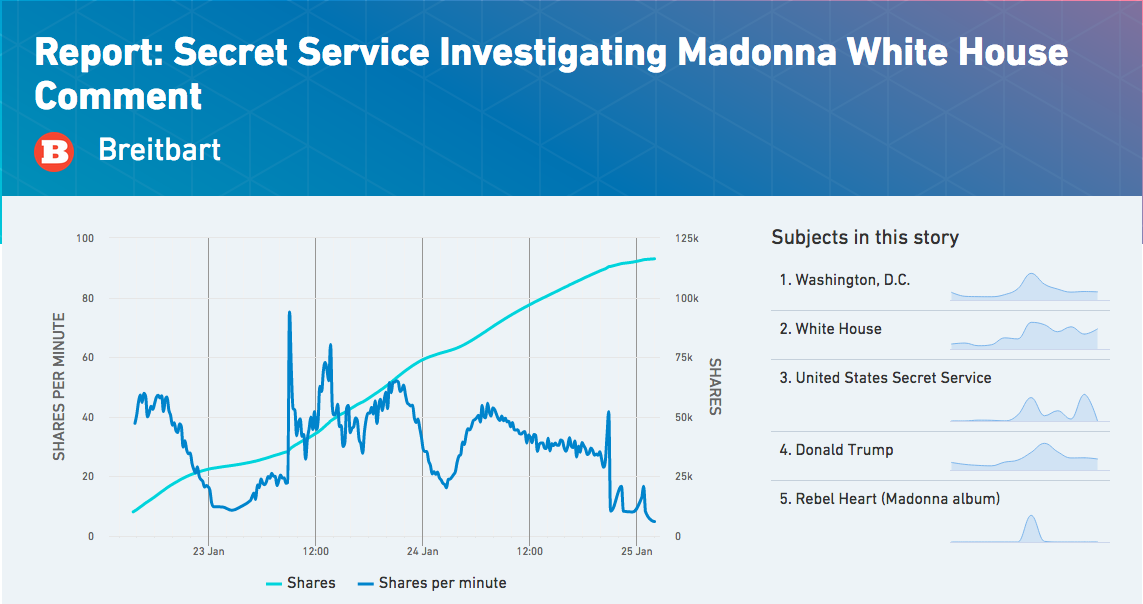 One Breitbart article about Madonna’s comments about Trump garnered 116,275 shares, according to Kaleida data.

The White House is narrowing the list of media sources it wants near to it and chose a select few to attend last Friday’s press briefing.

The digital newcomers Breitbart, One America News and The Washington Times were all invited. Journalists from ABC, CBS, WSJ, Bloomberg, and Fox News were there, too. Some of the traditional outlets such as The New York Times, The Washington Post and CNN were excluded from the event.

Given the President’s support of this new group of media sources we must understand what makes up that lens through which the public will see its messages. Breitbart is a good place to start.

The most successful stories published last week by Breitbart that Kaleida is tracking include:

Looking at those headlines it’s easy to see why many in the media business dismiss Breitbart as a news source. It doesn’t seem to take itself very seriously based on what resonates with their readers, or maybe it’s the readers that consider Breitbart lightly. But the President of the United States is a serious supporter of Breitbart and those numbers are very strong.

It would be foolish to dismiss Breitbart. Instead, let’s see what it’s all about.

They accuse competitors of producing fake new while producing a lot of it themselves. In fact, Breitbart’s most successful article clearly falls on the fake news spectrum with an intentionally misleading headline. This piece, “President Obama Awards Himself Distinguished Public Service Medal” earned a remarkable 200,000 shares on Facebook.

Yet they don’t support the core assertion. They provide quotes, a link to an AP story and several tweets which create the appearance of evidence, but those references do not backup what is stated as fact in the headline.

Breitbart tapped into a strong feeling by many Trump supporters that Obama was weak on military leadership with this article. The feeling represented by the assertion may be a real feeling, but feelings are not news. It discredits Breitbart as a reliable source of information. Even the belief that the story could be real is hard to defend when records show Presidents on both the left and right received the same award in the past.

There are many examples of media on both the left and the right fueling agendas through their reporting and use of language. This example is a particularly flagrant use of a factually incorrect headline that intentionally misleads Breitbart’s own readers.

There can be no doubt the headline helped Breitbart’s advertising model given the scale of the response. By comparison NYT had only 15 stories with more shares during the same period. CNN had 5. Fox News’ biggest piece earned 166,000 shares.

Other Breitbart stories have broken the 100k shares ceiling such as this story about Ivanka Trump’s perfume (106,245 shares) and this one about Madonna’s comments about Trump (116,275 shares). Of the top 25 stories all but one are about Trump either in the form of a Trump conflict with a celebrity or group, a Trump family member’s successes, or the end of Obama’s presidency.

By contrast, of the top 25 stories for Fox News during the same period only 10 are explicitly about Trump. An equal number are news articles about military issues or sporting events. Less than 5 are opinion pieces.

Breitbart’s followers on Facebook are eager to spread the news, too. Many Breitbart articles sit on their web site mostly unseen until they promote them on their Facebook brand page.

Their biggest story right now lived on the site for 13 hours without getting noticed. Then it soared immediately after a Breitbart Facebook post, presumably driving considerable traffic to their web site, too.

According to SimilarWeb their web site traffic is experiencing some impressive numbers.

There’s still a lot we don’t know about Breitbart, yet.

We don’t have figures tracking more subjective things like editorial standards. We aren’t aware of an ombudsman at Breitbart. We know little about their policies around corrections, disputes, fact-checking, image verification, or many of the things professional news organizations invest in and think about.

We don’t know much about their policies around advertorial, conflicts of interest or their social media policies and their approach to comment moderation. Though Breitbart states clearly in their terms of service that they don’t permit content that is “false, misleading, libelous, slanderous, defamatory, obscene, abusive, hateful, or sexually-explicit”.

Breitbart’s former senior editor voiced support for pedophilia on an Internet talk show recently. He has said many things that would fall into one or more of those categories and has now left the organization.

Being so close to the inner circle of the President of the United States Breitbart may require more rigorous standards for their staff as well as their commenters.

Those numbers have surely changed now, though it’s unclear how much the center-right is interested in the type of coverage produced by Breitbart. Fox News is strong with that audience and has more resources to dedicate to their journalism and the challenges of providing reliable information.

Breitbart’s team appears to be very small. LinkedIn shows only 25 people employed at the company which includes mostly reporters and editors. None of the people listed are copyeditors, researchers, lawyers, marketing or sales people. The business appears to be designed for one thing — publishing content quickly.

According to Crunchbase’s startup database Breitbart raised $10M from investors in 2011, though Crunchbase does not indicate who the funders are. Funding since then is unknown.

There was a time not long ago when BuzzFeed was making similar waves across the media industry, including questions about its reliability as a news source. LinkedIn shows over 1,500 people on staff. They’ve raised about $450M from investors. And they break major political stories with serious impact.

While it would make sense to compare Breitbart with Fox News given the conservative agenda, there might be more in common with BuzzFeed. Serious coverage happens, but their bread and butter is entertainment.

Based on the data we have available Breitbart appears to be a sort of early stage, political gossip version of BuzzFeed focused exclusively on serving Trump supporters. It is evolving quickly from unknown Los Angeles blog to White House messenger.

Their story will have many lessons to offer the rest of the industry, though it might be smart to stand back and watch how they cope when flying so close to the sun.

Matt McAlister is co-founder and CEO of Kaleida, which measures the flow of information around the world by analysing the output of news publishers and the sharing habits of consumers and forming insights into what matters most, to whom, when and how much. He has been deeply involved in journalism and media tech since 1994, leading digital business at print publications (IDG’s InfoWorld and The Industry Standard), developing APIs and open data initiatives at larger media companies (Yahoo! and The Guardian), and starting new companies. He is also cofounder of Publish.org, a nonprofit for open journalism. Contact [email protected].