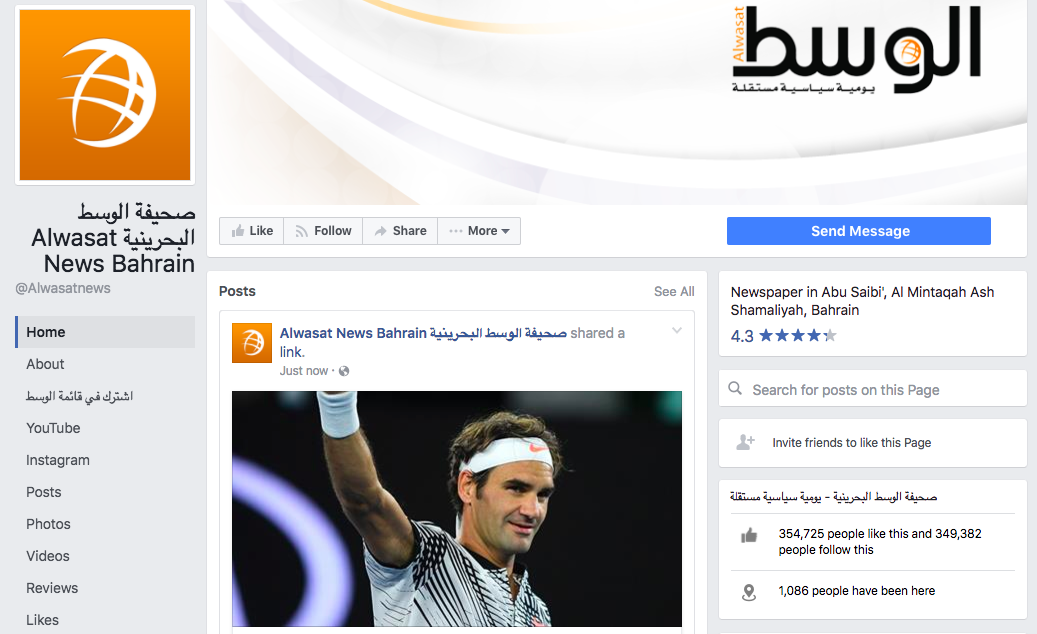 Bahrainian newspaper Al-Wasat was recently banned by the government from "using electronic media tools." After a short hiatus, the newspaper seems to have resumed publishing. Screenshot of Al-Wasat Facebook page.

On January 16, the Bahraini government banned the online edition of independent newspaper Al-Wasat from “using electronic media tools.” The Ministry’s order implies that the paper has been banned from publishing on its website and social media channels alike. The paper has 229K followers on Twitter and more than 354K on Facebook.

The Ministry of Information tweeted that it banned the daily from publishing online, for “repeatedly publishing and broadcasting material that causes a rift in society and a spirit of division that harms national unity and public order.”

It is not clear what material is the Ministry referring to, but activists suspect it may have been in response to the paper’s online coverage of the January 15 execution of three men convicted of murdering three policemen, following what rights groups have described as an unfair trial. Al-Wasat is not new to government harassment. In 2010 it was banned from broadcasting audio reports and interviews on its website. It was forced to close its video section for part of 2016.

In April 2011, the paper’s co-founder Karim Al-Fakhrawi died while in the custody of Bahraini security officials, after he was subjected to torture.

Al-Wasat’s website is still live. After a few days of quiet, Al-Wasat staff appear to have resumed publishing on January 19.

Journalists turned away at Gambia border, ahead of power transfer

Seven journalists from Kenya, Senegal and Sweden were reportedly denied entry to The Gambia on January 16, where they had planned to cover the historic transfer of power to the west African country’s newly elected president Adama Barrow. Outgoing president Yahya Jammeh, who has been in power since a 1994 military coup, publicly rejected the December election results and imposed a 90-day “state of emergency” citing foreign interventions in the election. Barrow was sworn in on January 19 at the country’s embassy in Senegal, which geographically surrounds The Gambia. The multiple west African governments have vowed to send troops into the country if Jammeh should refuse to relinquish power.

Shortly before leaving the office of President, Barack Obama commuted the sentence of American whistleblower Chelsea Manning. Photo by Stephen Melkisethian on Flickr and used with Creative Commons license.

In the final days of his presidency, Barack Obama commuted the sentences of 300 federal prisoners in the United States, including that of Chelsea Manning, the military intelligence analyst convicted in 2010 under the Espionage Act and the Computer Fraud and Abuse Act for releasing to Wikileaks thousands of classified documents exposing information about diplomatic relations and military activities in the wars in Iraq and Afghanistan. Manning served seven years of a 35-year sentence, which is by far the longest sentence any American citizen has ever received for a leak conviction.

Israel is considering new legislation that would allow Israeli administrative courts to demand that social media platforms like Facebook and Twitter remove online content that Israeli officials see as incitement to violence. Informally known as the “Facebook Bill”, the law was approved by a ministerial committee in late December.

Both Palestinians and Israelis have expressed concerns about the new bill’s implications for free expression, in light of its vague language, and the fact that Facebook already removes content that incites violence. Dozens of Palestinians have been previously arrested by Israeli authorities for “incitement through social media” after voicing their opposition to the occupation.

Global Voices contributor Marwa Fatfata writes: “Many Palestinians have turned to social media as a non-violent means of expressing criticism and anger over human rights violations, and as a way to simply show the everyday realities of occupation. If passed, the bill could be used to silence this type of speech and thus extend the occupation into the online world.”

In Kenya there are rumors that a new bill would seek to control the use of social media in the country. Photo of Nairobi by Ninara on Flickr and used with Creative Commons license.

Kenyans online have started expressing fears of a possible shutdown of social media by the government in the run up to the August 2017 presidential elections,. On Twitter, there have been rumors of a bill that would seek to regulate the use of social media in Kenya. There is precedent for such a shutdown — in mid-December 2016, security personnel shut down telecommunication equipment around Kenya’s parliament building as opposition and pro-government MPs clashed over the amendment of the laws regarding the upcoming elections.

Two courts in Oman have suspended the prison sentences of activist Hassan Al-Basham and writer Hammood Al-Shukaily, the Gulf Center for Human Rights reported. Al-Basham was sentenced to jail in June 2016 for “using of the Internet in what might be prejudicial to religious values,” and was also convicted of “insulting the Sultan.” On January 17, the Supreme Court revoked a three-year jail sentence against Al-Basham and referred it back to a primary court on the grounds that his defense team’s request for a medical examination was ignored.

The next day, a court of appeal in the capital Muscat suspended the 3.5-year prison sentence of Hammood Al-Shukaily, who was convicted of “incitement to protest” in connection with a poem that he wrote and posted on Facebook.

A 21-year-old student in Spain could face up to two and a half years in prison over 13 tweets she published that federal prosecutors say derided victims of terrorism. The tweets contained jokes about Luis Carrero Blanco, a prime minister during dictator Francisco Franco’s rule, who was killed in 1973 in a bombing carried out by Basque separatist group ETA.

One of the tweets in question read: “Kissinger gave Carrero Blanco a piece of the moon, ETA paid for him to take a trip there.” Insult or humiliation of victims of terrorism is a crime under Spain’s penal code. Prosecutors are also seeking three years of probation and eight and a half years of what’s known as full disqualification, which would bar the student — an aspiring teacher — from civil service employment, including working in a public school.