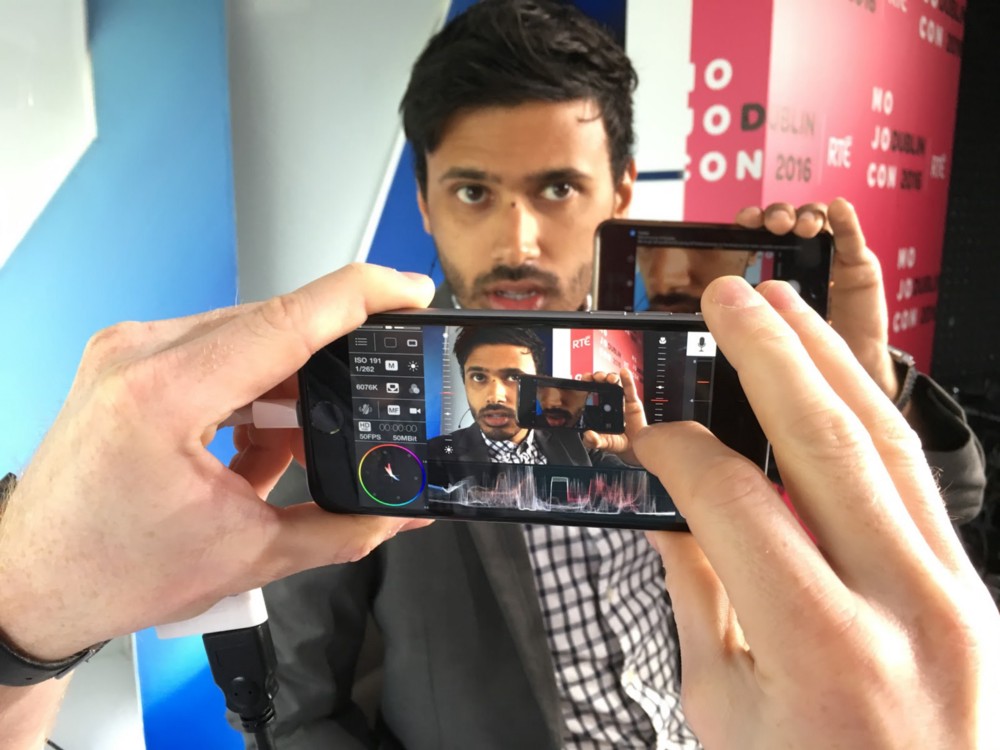 Yusuf Omar at the RTÉ Mojocon Ireland Conference, where he won Mobile Journalist of the Year 2016. Courtesy photo.

Yusuf Omar is the Mobile Editor at the Hindustan Times in India. He is currently building the world’s largest in-house mobile journalism team, training 750 reporters to tell stories using their phones. Yusuf was recently awarded at the world’s first ever Snapchat awards — The Ghosties — for his use of social media for social good. Yusuf also won IJNet’s Journalist of the Month in September 2016, for his use of Snapchat to tell the stories of sexual abuse survivors in India — or rather, to allow them to tell their own stories through selfie journalism. In 2015 he won Vodacom Journalist of the Year Editor’s Choice as well being named a Top 20 Global Millennial To Watch In 2016 by Cliff Central. Yusuf’s first forays in mobile journalism began in 2010, when he hitchhiked from South Africa to Syria with nothing but his smartphone and a small handheld camera to tell his story. Since then, he’s used mobile technology to report from the frontlines of the Syrian war to the #ZumaMustFall protests in Johannesburg.

In this interview, Storyhunter, which first published this post on its Video Strategist blog, talks to Omar about his work and what’s ahead for journalism.

Storyhunter: What does mobile journalism mean to you?

Yusuf Omar: Desperate people venting into front-facing ‘selfie’ cameras in Aleppo to college graduates crying on Snapchat when Trump won the US election. It’s all mobile journalism — stories told with mobile and for mobile devices — and it’s redefining the role of the media from creator to curator.

S: How do you think mobile journalism will change in the upcoming year?

YO: The curation of mobile journalism and user generated content will become the most valuable source for newsrooms. At the intersection of rigorous quality control, fact checking, and the endless and unverified stream of sources, is great journalism. Like the BBC’s Exodus documentary shot by refugees in rubber dinghies: it’s user generated and professionally authenticated. It’s a new form of news and it’s told from every angle possible. That’s where most traditional media — fixated on slow, expensive news-gathering, and yesteryear formats — fails.

Verifying the validity of sources will become big business for media houses. Too many perspectives is a good problem to have, but we will need to sort the real from the fake. The law of large numbers states that the greater the sample size, the more accurate our findings. With a quarter of the world’s population documenting their lives on Facebook, the democratization of media has already happened, whether we like it or not.

S: Are there particular platforms or social networks that you think will become integral to mobile journalists?

YO: This revolution will be Snapchatted, on Facebook, Instagram, and Twitter. We could also see use cases for Musical.ly and other new apps targeting where young people are creating cool things. Social media platforms that prioritize live videos will prevail. By 2020, armed with 5G cellular speeds, almost all of social media could be live. Unbuffered broadcasts by a generation that overshares everything (we brought you the toilet selfie), will lead to more live video content than we know what to do with.

To make sense of it all, journalists must help curate the true and debunk the fake. Social media needs traditional media’s expertise to fact-check, to sort through the explosion of content on our timelines. Traditional media needs social media to get closer to the human angle, to find the stories under the stream of news, to contextualize the noise. Together, they can sift through the noise.

This kind of verification can enable newsrooms to be relevant in the age of the smartphone. If balanced journalism seeks a variety of voices, the selfie is the primary source of our time. Curation is the new creation.

S: How do you use Snapchat as a mobile journalist?

YO: At the Hindustan Times in India, where we are training 750 selfie journalists, we’ve used Snapchat face filters to hide the identities of sexual abuse survivors. Selfie journalism has empowered women to tell their stories while maintaining dignity, without the archaic use of face blurring or silhouettes like TV broadcasters.

Covering education, we trained six students to Snapchat the most stressful six weeks of their lives hustling for a spot in university. Their selfies were curated into a reality show, #CampusCalling: they shared stories of their sex lives and turmoil with their families, details they are unlikely to have shared with a big camera and a boom mic.

In Punjab, Yusuf and the Hindustan Times Snapchatted a selfie journalism adventure in pursuit of drugs — connecting social issues with youth on a platform they can relate to.

S: What are the challenges of mobile journalism now and what do you expect them to be in the future?

YO: For aggregation of mobile journalism stories to succeed, even verification needs to be democratized. Think about it: there’s an estimated 2.5 billion smartphone users around the world. If we curated the content of just one percent, that’s 2.5 million storytellers. Media houses alone won’t be able to sort real from fake with that quantity of content. The audience would have to self-regulate. Wikipedia is far from perfect, but stories are reviewed and fact-checked by the community based on a consensus.

S: What do you see as the pros and cons of mobile journalism? Do you think these will change over the next year?

YO: For the ordinary citizen reporter telling an extraordinary story, there’s no tool more powerful than mobile: you can shoot, edit, and broadcast from one device. Since 9/11, mobile users have broken the world’s biggest stories. Activists used mobile phones to erupt the Arab Spring and the #BlackLivesMatter movements; the same devices are now broadcasting their tragic deaths.

But the spectre of “fake news” is being weaponized to discredit selfie journalism. In this battle, traditional media are positioning themselves as guardians against fake news; as the sole arbiter of truth, objectivity and impartiality. They say that social media users are unpredictable and accountable to followers, not press codes.

This is true. Recently, I posted a video on Facebook with my face replacing Trump’s as the TIME magazine’s Person of the Year — several people posted sincere congratulations. My friends are gullible.

So, selfie journalism can compromise the quality of news, but it doesn’t have to. It can also enhance it. From ‘final goodbyes’ in Aleppo to Snaps from the US election, the aggregation of selfie journalism could be our closest version of the truth.

S: Where do you see the role of professional journalists and freelancers going? And do you see them as remaining an essential part of the newsroom and journalistic process?

YO: With the unverified stream of content exploding our way on social media timelines, we’ve never needed professional journalists more. That’s why the New York Times saw a spike in subscriptions immediately after the US elections — audiences are hungry for not just authenticated journalism, but also for the added value of experience and expertise to contextualize the world around them.

As newsroom resources shrink and international players pull back on their global footprints, the demand for freelancers to access hard to reach stories is only growing. But the freelancer today needs to provide holistic coverage that can be used across platforms.

Gone are the days of just being a writer, photographer, or filmmaker. In an age of Robo-storytelling where even writing can be automated (you’ve seen the news stories written by algorithms during the Olympics) we must now become Robo-Cop storytellers — armed with lots of different narrative weapons at our disposal. That means the ability to do 360° videos, Snapchat stories, and a Facebook Live, all at the same time.

I think journalists will increasingly be regarded like influencers, and newsroom will want to buy into their social media followings. So you’re not just selling your stories anymore, but your ability to help them travel online. To share and engage.

S: Since newsrooms can be manipulated or have political agendas, how can we trust their ability to verify fake news and citizen journalism? Will we still need professional journalists to investigate and produce content on stories, even if the story originates with citizens?

YO: There’s nothing better than a reporter’s boots on the ground, digging deep for the stories that aren’t bubbling to the top of our social media timelines. The role of professional journalists to hold power to account and be the watchdogs of society is more important now than ever before.

If the media’s role is to mirror society, this includes highlighting its flaws. Journalists aim to expose audiences to the best and worst of humanity. We are hopeless romantics who still believe we can change the world and that starts with social issues. But to understand these issues, we need to leave our own bubbles of society and listen to the stories on the ground and from across the spectrum. Because many of us media folks are wealthier and more isolated from the social issues that plague much of society.

There has never been a more exciting time to be a journalist with the plethora of social media platforms and storytelling tools available. But this also offers more difficult and varied editorial choices.