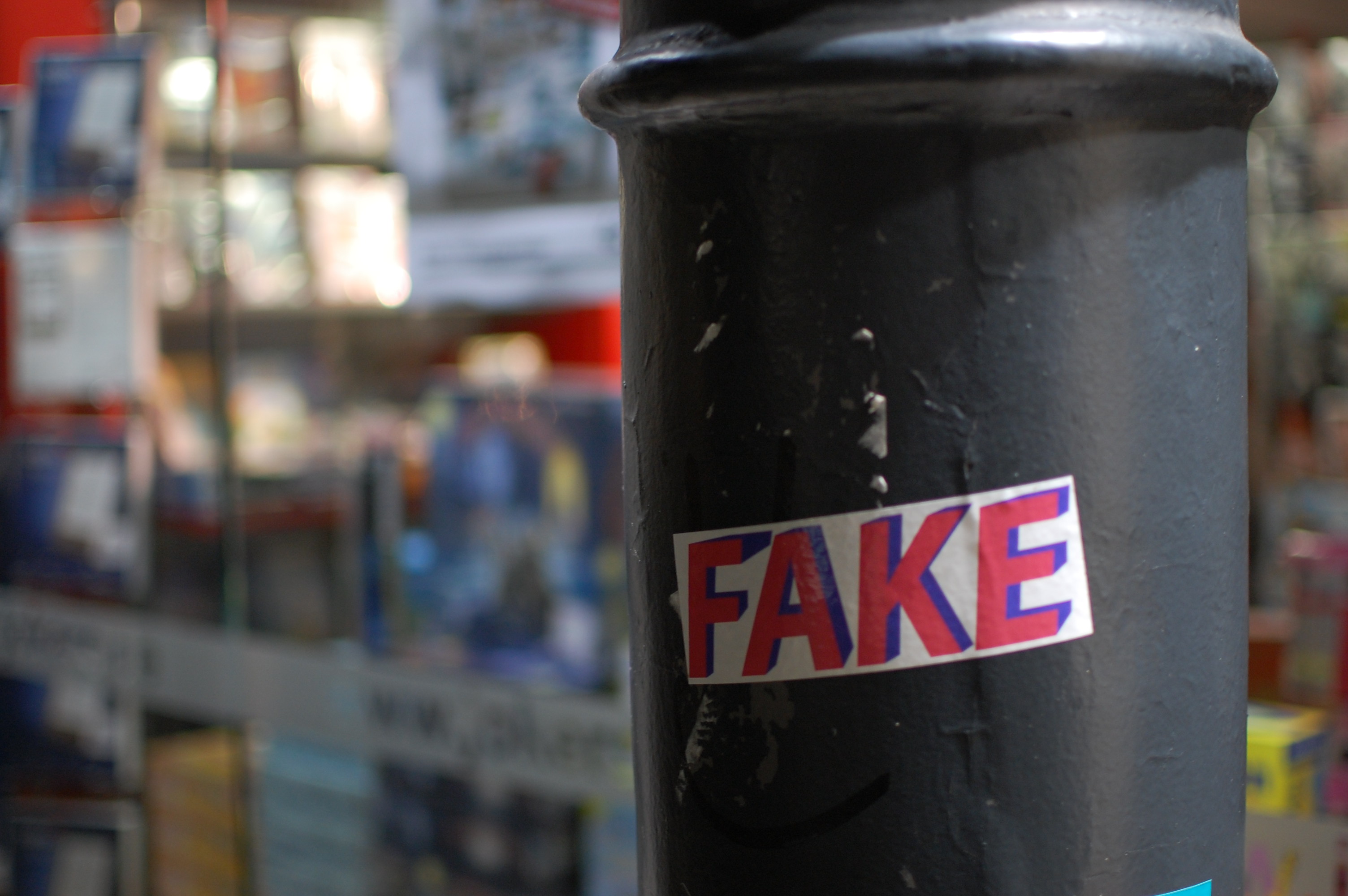 Photo by Karsten Knoefler used under a Creative Commons license.

As media experts and journalists are pointing fingers to the culprits and causes of fake news, the focus of the debate has started to shift toward tools and regulations aimed at preventing hoax stories from spreading in the first place.

Although Google and Facebook have taken some measures after facing mounting pressure to control the sharing of fake news, many media experts say their actions don’t go far enough. As a result, we’re not only seeing suggestions on how alleviate the problem like Jeff Jarvis’ “Call for Cooperation Against Fake News” but people and organizations who are taking the fight against fake news in their own hands.

French news organizations Le Monde, for example, has built a “decoding machine” to help readers “search through previously fact-checked assertions,” as Poynter reports. Other initiatives are more low-tech, like FiB, a Chrome browser extension put together by Purdue freshman Anant Goel and his team during a 26-hour hackathon at Princeton University.

With the software in place, Facebook users will see a green “verified” icon deeming stories to be true, or a red “not verified” icon identifying suspicious content.

“If statistically we can say that all this looks likes something that could be true, then that becomes verified,” Goel, a computer science student, told me over Skype. “Then you don’t have to fact check it.”

But Goel stressed that his software can only verify whether or not content of the article appears in a similar way elsewhere on the internet. This puts the onus on the news consumer, encouraging them to have another look around the web to see whether that particular story is being reported by other “credible” news outlets, Goel said.

“We try to find out what the source of the information is and how credible that source is. We then move on to the content of the article,” the student from India explained.

If the article in your Facebook newsfeed is by the New York Times, it’s verified. But if it’s, say, about a German military rite making soldiers eat raw geese, and if the source is unknown or questionable, Goel said the browser plugin would get to the bottom of that.

“We would analyze the article, figuring out its claim that German soldiers eat raw geese. We would then do a Google search on how many soldiers eat geese. I’m sure Google would come up with the fact that soldiers do not eat raw geese. And our software would too. And it would tell the user that they need to verify this. In this case, you should try another source.”

Although the plugin tool, named “Best Moonshot” project by hackathon sponsor Google, hasn’t been tested at scale, its simplicity begs the question: If these undergrads can put it together in 36 hours, shouldn’t Facebook — not to mention Google — be able to match them?

“I’m not sure if Facebook and Google can do it within the same timeframe given the added complexity, but with a bigger timeframe I’m sure they could accomplish the same thing,” Goel said.

Separating the wheat from the chaff

According to a recent Stanford study, U.S. students have a ‘dismaying’ inability to tell fake news from real. The fact that fake news stories tend to outperform mainstream stories on social media only complicates the issue. A week after the U.S. elections, BuzzFeed reported that fake election news stories generated more total engagement on Facebook than top election stories from 19 major news outlets combined.

The debate about fake news isn’t exactly new, but it wasn’t until media watchers said fake news on Facebook and Google might have tilted the election for Donald Trump that the topic started making the headlines.

“Fake news is being shared at rates greater than actual news sources about certain topics,” said Melissa Zimdars, assistant professor of communication and media at Massachusetts’ Merrimack College. “So clearly there’s an influence. And I would argue as great an influence as outright fake news is likely the proliferation of websites that don’t traffic an entirely fake news but occupy this gray area between fake news, opinion and actual news.”

A world with or without fact-checking? Think before you share! pic.twitter.com/RwddHpJdIA

Zimdars has compiled a list of about 130 “false, misleading, clickbait-y, and satirical ‘news’ sources” that didn’t seem trustworthy. Her main impetus, she said, was the lack of a database with criteria to separate the wheat from the chaff.

“I knew that there was sort of a general broader issue with different news outlets having different goals and doing different things in it, and people generally having difficulty navigating that,” Zimdars told me over Skype.

The rationale of fake news sites is simple: get people to click through to the fake news site and then sell ads through Google AdSense to get paid. In early November, BuzzFeed News identified more than 100 pro-Trump websites being run from a single town in the former Yugoslav Republic of Macedonia. Thanks to wildly sensationalist Facebook posts recycled from American alt-right  pages, “TrumpVision365.com,” “WorldPoliticus.com” and other sites compiled hundreds of thousands of Facebook followers. Reacting to BuzzFeed’s findings, President Obama reportedly said the “capacity to disseminate misinformation, wild conspiracy theories, to paint the opposition in wildly negative light without any rebuttal” has “accelerated in ways that much more sharply polarize the electorate and make it very difficult to have a common conversation.’”

According to Zimdars, a typical fake news article includes some actual information surrounded with a lot of false and contextualized information that mimics how the source has been covering the respective event. “The sites take kernels of truth and then exaggerate them and distort them to tell stories in particular ways,” she explained.

But fake news can also affect people in their everyday lives. Like Jürgen Kasek, the chairman of Germany’s green party in Saxony, who became the victim of false information spread on Facebook. In July, Legida, the Leipzig chapter of the pan-European, right-wing protest movement Pegida, accused Kasek on Facebook of having orchestrated an attack on one of their security guards. Within 48 hours, people showed up at Kasek’s office, insulting him and threatening to assault him.  Kasek also received more than 200 hate comments on Facebook and thus decided to sue Legida. Legida took down the post and agreed to refrain from repeating the accusations after a court urged Kasek & Legida to come to a consensus-based solution.

But it didn’t end there.

“A few weeks ago, I tried to board a train,” the 36-year-old told me. “There were members of right-wing groups. The first person who saw me was crying ‘That is the Kasek,’ and a bottle was flying and hit me on the head. A lot of people tried to harm me.”

Putting hoaxes and rumors on a map

Physical harm and a tarnished reputation like in Jürgen Kasek’s case is just one example of negative consequences of fake news. In Germany alone, there are hundreds of cases, and they are literally being mapped out on a website called HOAXmap. As of November 29th, 434 cases of fake news about refugees and migrants in Germany had been reported on the site, ranging from harassment and arson to involuntary manslaughter.

“The real number is a lot larger,” said Karolin Schwarz, who started HOAXmap in February after being confronted with rumors working in a refugee shelter.

“One of the rumors we debunked was about refugees robbing a supermarket. The owner reacted really fast by putting up this sign on his front door saying that this isn’t true, and he posted on social media about that. This post was shared way more than the original fake news post.”

But Schwarz admitted this is the exception. It’s important to note that one reason for the apparent superior allure of fake news is that some people are more prone to hoaxes than others. Several studies back this observation, including one recently published in Germany. It says that while a majority of Germans defends democratic values and the government’s pro-refugee policies, radicalization is on the rise. And once these people are radicalized, it’s hard to reach them with facts.

“There are a lot of people who have created an alternative reality in their lives where the classic media houses don’t matter anymore,” Schwarz said. “They take their news from these alt-right or neonazi websites. I don’t know how to reach those.”

A little due diligence goes a long way

Jürgen Kasek on what to do when fake news affect you: