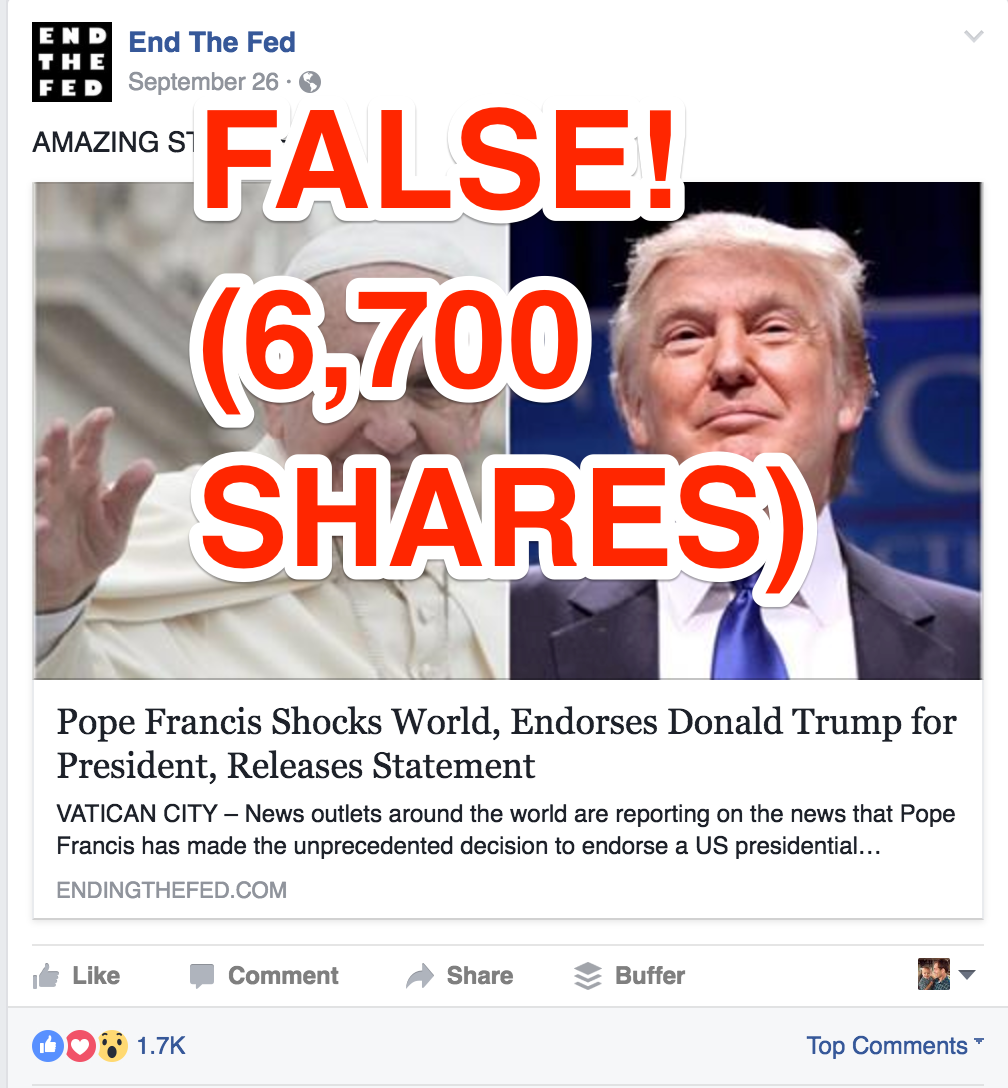 On September 26, a post from the Facebook page End The Fed claiming that Pope Francis endorsed Donald Trump had more than 6,700 shares.

Of course, the story is totally fake.

It’s been debunked by Snopes, FactCheck.org and other outlets and was eventually taken off the End The Fed website. But the headline and prominent photo is still on Facebook, where it continued to be shared leading up to the election.

A new BuzzFeed News analysis found that this article had the highest engagement of any news — real or fake — in the three months leading up to the election. The article had more than 960,000 total likes, comments and shares.

Fake and misleading news on Facebook likely isn’t going away anytime soon. It’s a complex problem and there’s no magic bullet solution. At the same time, Facebook’s recent acquisition of analytics platform Crowdtangle might signal the opening of a new front in the battle.

To explain why measuring viral content on Facebook can fight hoaxes, it helps to understand why fake news thrives in social media.

In a recent article, Huffington Post deliberately demonstrated the power of fake news with the provocative (and totally untrue) headline “Bernie Sanders could replace Trump with this little-known loophole.” It was a bait and switch, and the article exhorted readers to fact-check what they read. The article has 60,000 shares on Facebook so far.

In an interview with the Washington Post, serial hoaxer Paul Horner suggested that Trump was helped by viral fake stories.

“My sites were picked up by Trump supporters all the time,” he said. “I think Trump is in the White House because of me.”

This underscores the power of embellishment, hyperbole and outright lies on Facebook. Hoaxes on the Internet pre-date Facebook, of course. But Facebook changes the entire scale and scope of the enterprise, while engagement algorithms provides an environment for fake news to flourish.

The reason fake news is so successful is it can use the newsfeed algorithms to its advantage without being constrained by the truth. In fact, the more blatant the lie, the more Facebook’s algorithm rewards this kind of story.

Let’s assume that a portion of the comments on this type of article point out that the story is false. Even that plays into Facebook’s algorithms that favor engagement. The mere act of commenting would push the headline back into people’s newsfeeds where it could be seen and shared by more people who don’t read the comments or even click through to the article.

And the cycle beings again.

As of now, Facebook’s manual system to report fake news is clunky and takes effort. You have to be a power user and know what you’re doing.

Then what? You wait. And maybe nothing happens.

I messaged End the Fed about their post, but have yet to hear back. And it’s still on Facebook.

[UPDATE: The article wasn’t removed for more than 24 hours after I reported it, but was removed in the hours after I asked others to report it.]

“A lie gets halfway around the world before the truth has a chance to get its pants on,” Winston Churchill once said. (Or did he? Someone on the internet said it. But the point remains.)

In other words, lies spread quickly. But if Facebook can predict if a lie will go viral, maybe they can give the truth a fighting chance.

And there is some encouraging news in this battle.

Shortly after the election, Facebook acquired the analytics firm Crowdtangle, which allows publishers to see how stories are trending.

“By showing its subscribers a kind of real-time pulse of the web, CrowdTangle has developed an outsized but mostly hidden influence on the stories you see popping up in your news feeds throughout the day.” Casey Newton writes in the Verge.

That sounds like the type of analytics tool that can detect problems before they get out of hand. I’m not the only person who feels might hold potential to combat fake news.

Facebook's purchase of Crowdtangle could easily wind up helping it track and combat fake news https://t.co/nzav5gnkCz

Of course, tools are only as good as the people at the controls. Facebook may still need a team of fact checkers who can vet trending stories in real time to determine the veracity, something that Mark Zuckerberg has been careful to sidestep.

“This is an area where I believe we must proceed very carefully though,” Zuckerberg wrote in a Facebook post. “Identifying the ‘truth’ is complicated… I believe we must be extremely cautious about becoming arbiters of truth ourselves.”

Zuckerberg has downplayed the idea that fake news is a problem on Facebook. When asked about it after the election, he said fake news was “a very small amount of the content” and the idea that it influenced voting was “a pretty crazy idea.”

So the question is that if Zuckerberg has the analytics tools to combat fake news, will he use it?

Less publicly, Facebook might be taking more steps to combat fake news. It could be unrelated, but a recent survey on Facebook asked about the impact of fake news.

A Facebook survey popped up for me tonight pic.twitter.com/EhHQUCH2hq

It’s pure speculation at this point, but this survey might be one indication that the purchase of Crowdtangle could have broader applications.