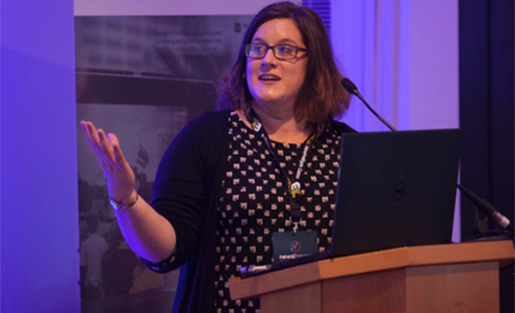 In the news this week, Vice finally launches its nightly news program on HBO, which gets mixed reviews. News organizations like CNBC, Fortune and Time drop online polls after the second presidential debate. And what do Comcast and Wells Fargo have in common? Getting fined for mistreating customers. Politico’s Joe Pompeo joins us to talk about the Wall Street Journal’s umpteenth digital-first revamp, and our Metric of the Week is “content segments.” We go one-on-one with Jenni Sargent of First Draft to talk about how social platforms are on board with a coalition of publishers to help verify breaking news on social media.

"There's just so many brilliant projects happening all around the world and we're just trying to connect everyone." - Jenni Sargent on the work of First Draft News

Jenni Sargent is managing director of First Draft News, an organization set up in 2015 to provide guidance and training for journalists in social newsgathering and verification. She is also a director of Eyewitness Media Hub and part of a research team responsible for exploring the impact of media attention on eyewitnesses who have shared their images online.

It’s easy to say that the half-hour broadcast evening news shows are old-fashioned and stale. It’s another thing altogether to try to revolutionize them and make a new version for younger audiences. But that’s what Vice and HBO aimed to do with “Vice News Tonight,” a nightly show with no anchor and a stream of tidbits of news interspersed with somewhat deeper pieces. While the show’s guiding force, Josh Tyrangiel (TEE-ran-gull) initially told his bosses that “nobody needs this,” he bought into the idea and after some delays it finally launched on HBO last Monday. You can also watch the show on a one-week delay on ViceNews.com, or find the key segments posted on YouTube.

So far, reviews have been mixed. Over at IndieWire, Ben Travers wrote that the show lacked cohesiveness, functioned like a bunch of YouTube videos and was nothing special, yet. Variety’s Maureen Ryan was a little more charitable, writing that a report on a Holman Prison strike, with a prisoner calling in from solitary confinement, shows the newscast has promise. And The Hollywood Reporter’s Daniel Fienberg said the show delivered little “amuse-bouches to whet appetites for full meals available online,” as it will drive people to learn more with short pieces. Vice already had some success with its more newsmagazine-like weekly show on HBO, but making that a nightly habit is tough when you fall between the existing nightly news and the comedy shows like “The Daily Show.” We’ll see if it can evolve and thrive, but Vice definitely needs a win for its various TV offerings as its Viceland cable channel continues to struggle.

If there’s one defining aspect of presidential races in the U.S., it’s the amazing amount of polling — who’s winning, who’s losing. The dreaded “horse race” coverage. And news outlets have driven more traffic with online polls to get opinions from people on hot topics. But those online polls are easily gamed because they don’t get representative sample sizes, allow people to vote more than once, and… you get the point. And yet, in this election cycle, we saw a whole host of online polls after the first presidential debate, and they pointed to an overwhelming win for Donald Trump. Trump even trumpeted those results, despite their unscientific nature.

So for the second debate last Sunday, a handful of news outlets decided to abstain from using online polls. According to Business Insider’s Oliver Darcy, Time, CNBC, Fortune and The Hill all scrapped plans for online polls after the debate. Not surprisingly, Trump once again used the remaining online polls to exult in victory after the second debate. The Washington Post’s Philip Bump pointed out that these are “garbage online surveys,” and noted that more sophisticated polls from the Wall Street Journal and NBC showed Trump falling behind Clinton after the “Access Hollywood” video went viral. As for true public perception about the 2nd debate, CNN and ORC, and Politico and Morning Consult took the time to call people and sample registered voters, finding that Clinton won by a lot. While the race has degraded into the gutter, the least the media could do is make sure we understand which polls are trustworthy and which aren’t. Or just drop online polls when it comes to something more important.

Comcast Gets Massive Fine from the FCC

Ever wondered why you got billed for something that you never ordered? Wells Fargo customers have been in the news for getting accounts and charges added to their bills, and now Comcast has been taken to task by the FCC for doing something similar. The FCC fined Comcast $2.3 million for a practice called “negative option billing,” or adding charges for premium channels, set-top boxes or DVRs without the customer’s consent — or even in cases when customers specifically said they didn’t want them. The customers complained to the FCC not only about the charges, but also about what a pain it was to get them removed and credited to their accounts.

Comcast is saying that it has improved customer service since these issues arose in 2014 and 2015, but that it doesn’t agree with the fine or the FCC’s “legal theory.” But if Comcast had a case, it likely would have fought the FCC rather than settle for a big fine. While it is a record fine for a cable company by the FCC, cell providers have been fined for much, more more. AT&T had to pay $105 million in 2014 for similar practices called “cramming,” where customers are charged for features they didn’t want. And T-Mobile settled with the FCC for $90 million for a similar issue. The bottom line is that large service providers have a long history of “making mistakes” that are in their favor, while customers have to use magnifying glasses to make sure they’re not overcharged. No wonder so many people prefer to cut the cord and work with smaller players.