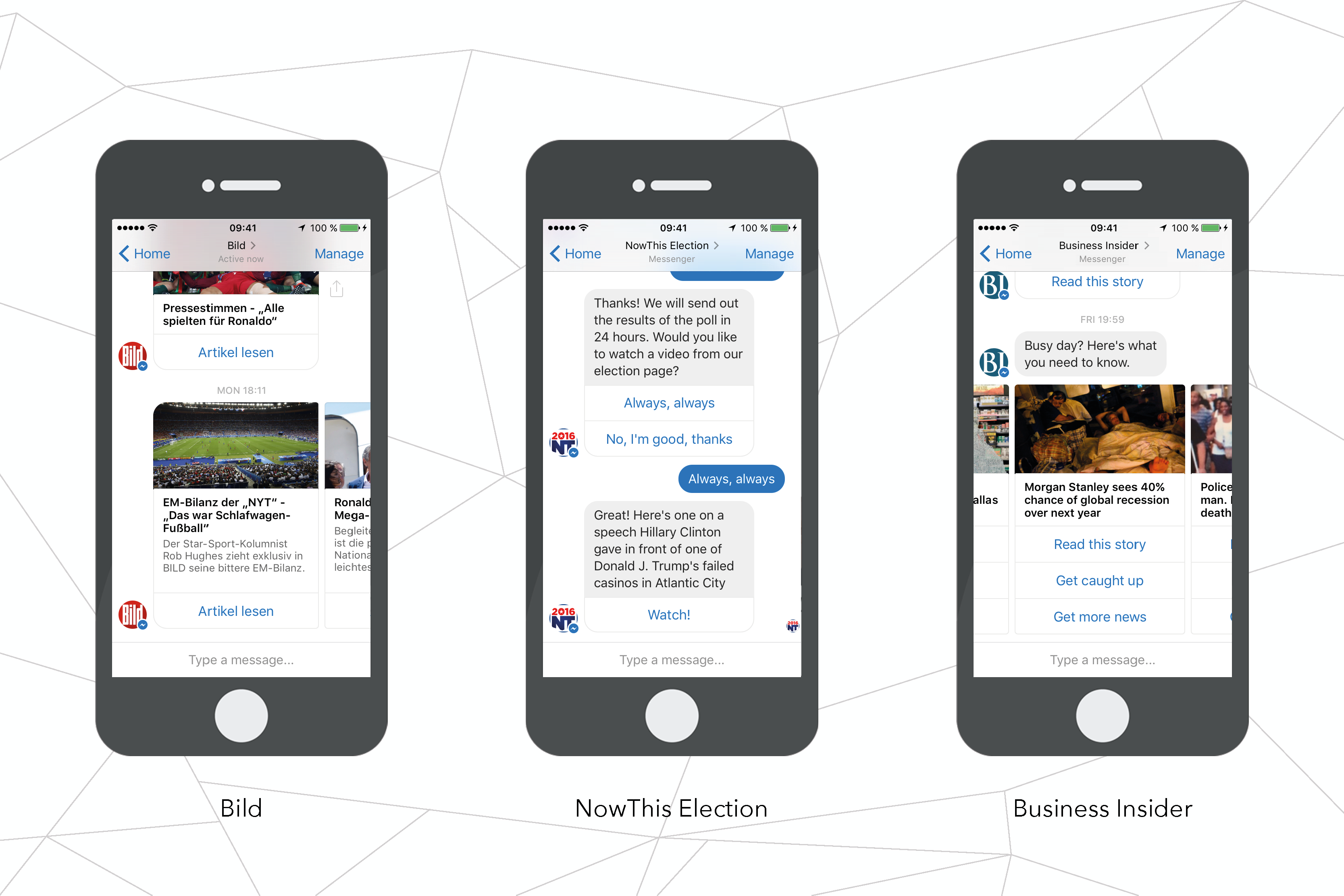 If Max Koziolek is right, online journalism never had a content problem. The crux, he says, has always been distribution.

“The shift from homepage to distributed media is as big as it was from print to digital,” said Koziolek, founder and CEO of Spectrm, a Berlin-based chatbot startup. “That has implications for how media companies and advertisers should think about reaching [digital media consumers].”

According to the German media entrepreneur, Spectrm is one of the first ventures that allows publishers to create and manage so-called chatbots for delivering content to audiences over messaging platforms including Facebook Messenger, Slack and Telegram.

Chatbots are an example of conversational journalism, one of several emerging trends major media companies are currently experimenting with. By disseminating personalized information on messaging platforms, these software programs help people read the news, schedule meetings, get weather updates or find a pair of shoes.

What’s fueling the development of chatbots is advancements in artificial intelligence, coupled with the proliferation of messaging apps: As of June 2016, chat is larger than social networks in number of active users (three vs. 2.5 billion), according to the Reuters Institute Digital News Report. It’s no surprise, then, that publishers are pinning their hopes on chatbots to win over young media consumers and find new ways to monetize content. And it’s not just publishers: Businesses like HP, Taco Bell and 1-800-Flowers are also trying to tap into conversational commerce by means of chatbots on messaging platforms and collaboration channels like Slack.

The potential of the burgeoning bot economy seems immense: In the first six months since its launch in April, Facebook’s new bot store outpaced Apple’s App Store both in terms of growth rate and number of developers. It has been suggested that 2016 will be the year these conversational interactions take off.

Koziolek said the wealth of information created by millions of digital dialogues has allowed his team to discern behavior patterns.

“This is the first time we can see trends in how users behave, thanks to the rapid growth in delivery of content over messaging platforms,” said the Berlin-born 26-year-old.

The high degree of interaction with content surprised the founders, Koziolek said. About two-thirds of all users asked for further content or context on that same subject.

Moreover, niche articles, only available on certain publications, seem to be more popular than general news that’s widely available elsewhere. “It seems [that] general-interest topics is something users just skim,” said Koziolek, who secured a partnership with Facebook at the social media giant’s F8 developer conference in April. “Unique or specialized topics get the clicks.“

What’s more, users tend to consume news during the day rather than in the morning. And: Readers are more willing to share content they see on messaging apps. According to Koziolek, content distributed over messaging makes up as much as 20 percent of website traffic of Spectrm’s clients, which include German publisher Bild, Business Insider and NowThis. The startup will add more than one hundred additional publishers in the U.S. and Europe “in the coming months” and open a New York office early next year, said Koziolek, who is currently splitting his time between Berlin and New York, home of most major players in the media industry.

“What the web calls ‘Dark Social’ – sharing that happens outside the social networks – is huge,” Koziolek said. “But we’re still surprised by these numbers, because sharing from messaging apps is still pretty tricky.”

“Four recent examples are the New York Times’ presidential election bot, TechCrunch’s Messenger Bot, CNN’s news bot and The Guardian’s “Sous-chef.” The learnings from the Sous-chef test phase illustrate that automated conversations are still half-baked in many regards — and that users first need to get used to them. For instance, the reaction was often negative when responses were too formal and robotic. Conversely, when the bot “tried” to be too human, people were taken aback.

“Spectrm has a smart, entrepreneurial team addressing a need many media companies and other businesses are going to have,” said North Base Media co-founder and former The Wall Street Journal and The Washington Post editor Marcus Brauchli. “That is, how to connect with their audiences and customers on messaging platforms, where more and more of them are spending time.”

At the GEN Summit this June, Philippe Hertzberg, an affiliate with Empirical Media, said platforms like WhatsApp, Line, WeChat and Facebook Messenger are prime business channels that allow publishers to build a narrative and interact directly with users, thus serving as a community builder.

Koziolek would neither comment on whether this is indeed the case for Spectrm’s clients nor the business model of his startup.

An important question remains: Will communication-driven journalism assert itself?

Thomas Baekdal, a Danish media consultant, is skeptical. Unless media companies start thinking about chatbots as a way to “potentially change the way we consume news” rather than merely a new format, he doesn’t see a future for chat artificial intelligence.

“Publishers can just continue to do whatever they used to do without considering this new field of publishing at all,” Baekdal told me in an email, “and then some automated bot system will just repackage content that isn’t really designed [for] chatting into a rather boring format. We won’t have an AI bot future until publishers start to rethink the reason they do it.”