Remix: How to Use Snapchat in the Classroom 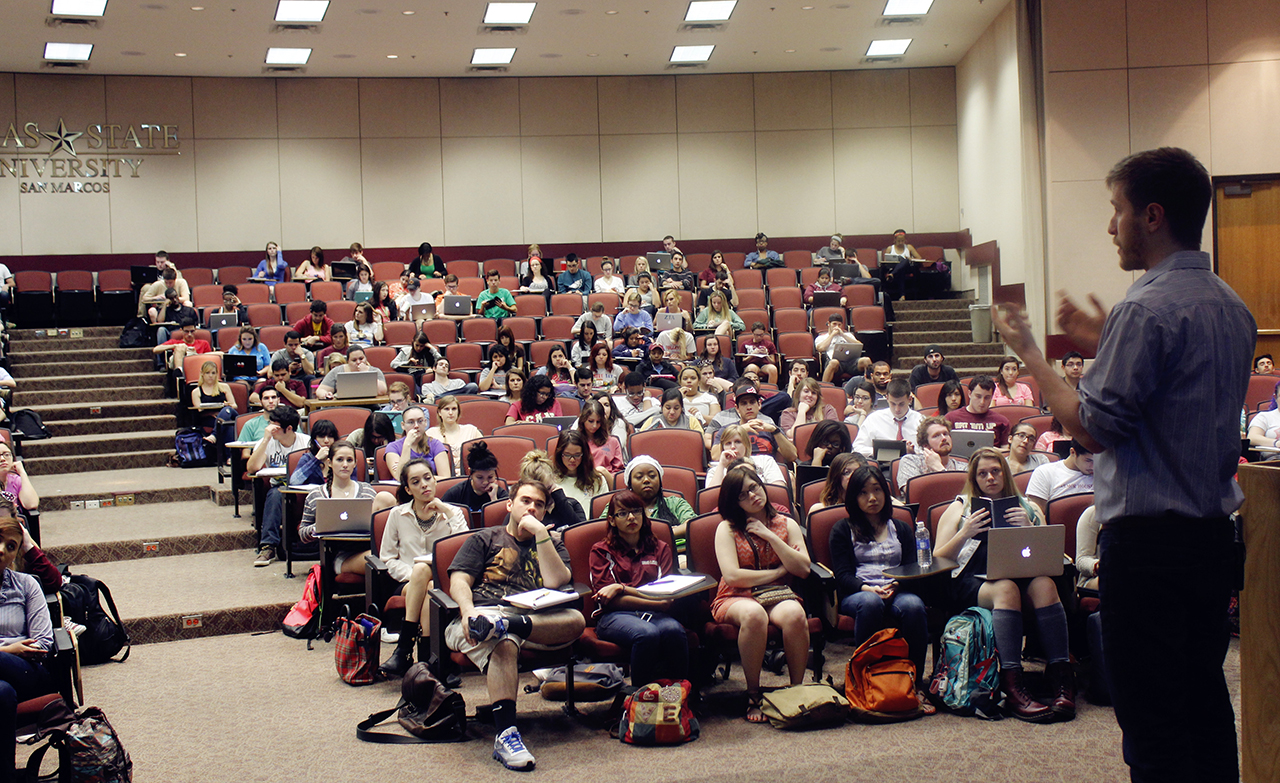 Jon Zmikly teaches a core course in the School of Journalism and Mass Communication at Texas State University which focuses on digital topics, trends and skills. (Photo taken by Samantha Byrd)

As a digital media instructor, I love using social media to engage with my students. Whether we’re using class-specific hashtags on Twitter to share relevant news items or Facebook groups as a forum for job and internship postings, social media can be an invaluable classroom supplement. Particularly useful for mass communication courses, my students have learned valuable skills and to think critically and professionally about each platform and its impact on the media industry as a whole.

But when Snapchat arrived on the scene a few years ago, I was leery. It was different from the others. Disappearing messages didn’t seem like the most effective way for storytelling, and its dark beginnings as a sexting app for teenagers made it feel less … journalistic. Profiles aren’t “public.” It’s hard to find and follow users. And the goofy filters and drawing tools make it seem like a toy, not to mention its native shot composition is every video journalist’s nightmare: vertical video. Ugh. I had honestly hoped it was just a phase.

I like to provide previews and wrap-ups of course material to engage students throughout the week.

But it’s is no fad. And as a media professional, Snapchat is becoming impossible to ignore. With a rapidly growing user base and content reaching 41 percent of all 18- to 34-year-olds in the United States, it is increasingly competing with mainstream social media sites for news dissemination. Anecdotally, every semester I ask my undergraduate students which social networks they use most, and roughly 95 percent of them say they use Snapchat on a daily basis. After Instagram’s Snapchat-like update earlier this month, one thing is becoming abundantly clear: Disappearing media isn’t going anywhere.

I finally decided to officially use Snapchat as a class resource for my Fundamentals of Digital and Online Media (FDOM) course in fall 2015. This three-credit course in the School of Journalism and Mass Communication at Texas State University is a requirement for all mass communication majors. It is a hybrid lecture/lab/online course focusing on a variety of practical digital skills like creating effective online content, video editing, app prototyping and social media usage, as well as a basic understanding of digital topics, such as online business models, marketing and insight into the web development environment. For me, it was the perfect testing ground for introducing the new platform in the classroom, as we seemed to talk about Snapchat’s innovations and updates in class every week anyway.

I started out by using Snapchat to provide video tours of our labs and my office. With over 400 students in the class, I found it to be a great opportunity to personally engage with them and provide a preview of our physical spaces. It was also effective in building excitement about the class and labs and diminishing some first-day-of-class anxiety. Students responded with emojis. They replayed my snaps. I felt like I was reaching students in new and creative ways. As the semester progressed, I continued to experiment with drawing tools, screen overlays and text to provide reminders, updates and even weekly quiz hints.

After my first semester, I realized that all my initial reservations against Snapchat’s differences — its affinity for awkward shot composition, its expiring content, its silly filters, its penchant for shaky videos — were actually its enormous strengths as a social network. I soon discovered Snapchat’s unique personality fills a gap where other social networks have left me wanting in the classroom. Here are just a couple of examples:

Snapchat messenger has been surprisingly useful with visual projects where I can see a student’s computer screen, and we can communicate seamlessly.

Twitter Tedium: I have always been a huge proponent of using Twitter in the classroom (and I still am). It’s effective for links to relevant course articles, students helping one another on projects or for asking me questions. However, Twitter conversations can often seem one-dimensional and sterile at only 140 characters. In addition, I have noticed some students not wanting to ask a “stupid question” on such a public forum. Snapchat offers personality, humor and visual content. It’s loaded with geolocation filters and face-warping effects that can make updates more memorable and personal and can make a teacher seem more approachable. In addition, its private nature has provided a place for students to “text” a question to the account or get visual help on a project. For example, when a student “snaps” me his/her HTML code, I can easily and quickly help by snapping back a suggestion. These kinds of issues may be too “public” in a Twitter conversation or too cumbersome via e-mail.

Fickle Facebookers: In my experience, Facebook has always provided the most interactive and holistic digital classroom supplement of other social media sites. With the ability to post links, images, multimedia and a personal connection, it seems to have it all. However, I have noticed students generally moving away from daily use of Facebook in favor of Instagram and Snapchat. Plus, in my case with such a large class, it has become more and more of a challenge to invite students to join and to stay engaged in our Facebook group. Since Snapchat is already part of their daily routine, students have a greater chance of being exposed to its content. Instead of trying to “hack the news feed,” my updates on Snapchat appear on a visual list of their Friends. As soon as I create an update, it becomes first on their list of “Recent Updates.” This can be especially effective when announcing a last-minute room change or reminder that an assignment is soon due.

During SXSW Interactive, students followed my updates and interacted with the class-related content I provided.

The more I use Snapchat for teaching, the more I understand the gap it fills as its own unique social media platform. This really hit home for me last spring. In March, I assisted with Dr. Cindy Royal’s SXTXstate project in which graduate students cover SXSW Interactive. During the conference, we heard from a wide range of speakers about technology, media and innovation in those spaces, and because FDOM touches upon many of those topics and people, I decided to “snap” my experiences and takeaways. The results were profound. Despite this being their spring break and a completely optional way to engage with this course, over 200 students engaged with my content. Through my coverage, students heard from the likes of President Obama, Gary Vaynerchuk and saw what makes a self-driving Google car work. Some took screen shots of quotes from panels. They asked me questions. They thanked me for the updates. I’ve never received that level of engagement from students on social media before. It was eye-opening.

If you are thinking about using Snapchat in your classroom, these tips may help you:

After using Snapchat in the classroom for over a year, I’m still finding new hacks and ways to use the medium. I’m excited to see how the app grows and develops for personal, business, and, yes, even educational use.

Jon Zmikly is a senior lecturer in digital media innovation sequence of the School of Journalism and Mass Communication at Texas State University. He is also a youth pastor at his church where he learns new ways to improve his Snapchat game.