Teachable Moments at the Presidential Debate at Hofstra 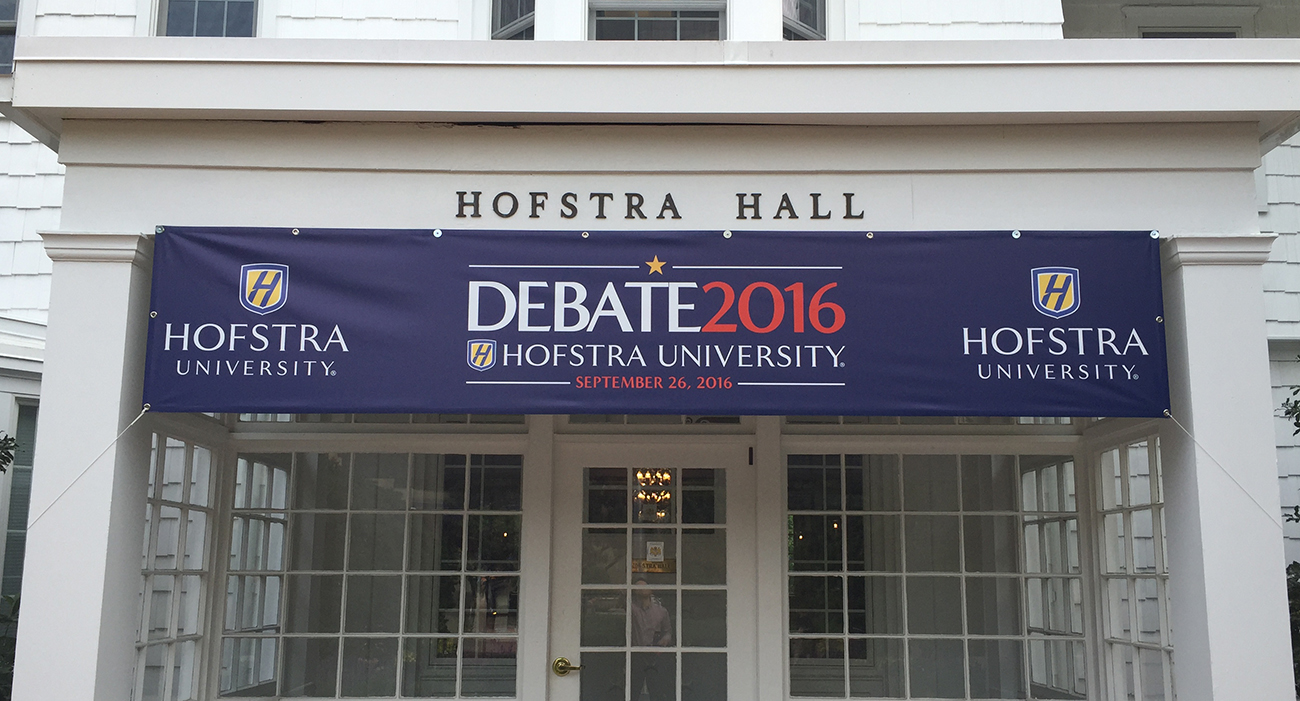 As Hofstra University prepares to host the first Presidential debate on Sept. 26 between Hillary Clinton and Donald Trump, the journalism faculty in the School of Communication is finding ways to involve students and take advantage of this unique learning opportunity. The debate promises to be an extraordinary political event, based on the unconventional and controversial lead-up to this point. National and international attention will be pointed at this singular moment and this campus, as the heated rhetoric culminates the first time Trump and Clinton engage with each other face to face.

There are both curricular challenges for faculty, as well as reporting difficulties for students. First, the Commission on Presidential Debates announced only in late summer that Hofstra would host the debate after Wright State University in Ohio pulled out, citing security and cost concerns. That left only weeks before the start of the semester for instructors to revamp syllabi and come up with debate-related assignments.

Second, admission to the event is tightly controlled. All students are subject to a university-wide lottery just for a seat in the debate hall. Moreover, the actual debate will see wall-to-wall coverage from mainstream media, which will flood the campus. How could Hofstra students report on the event in a way that could add value to what will already be reported? How could faculty best leverage the debate as a journalistic learning moment? In particular, how could new media tools or approaches provide alternative ways to tell stories about the debate?

For Professor Kelly Fincham, an expert in new media spaces and social media, having the debates on campus was an opportunity to get her students to observe and partner with professional news organizations. The simple fact that media would be setting up meant that students could learn from watching the process. “Students will get to see the world of media in action,” she told me. “They’ll be immersed in a massive global event.” But they would also be busy reporting. Fincham created an independent study course specifically for the Presidential debate. With six student reporters, she’s coordinating her team with Newsday, the local Long Island news outlet, and WABC, the local ABC affiliate, to file stories before, during and after the debate.

Professor Mario Gonzalez, a television and multimedia news veteran, agrees with the value of having media outlets surround campus and the kind of learning that environment affords. “I want them to experience what it’s like to be out there,” he said. “They can learn a lot just by seeing how other news organizations do things, and to listen to the kind of questions that they’re asking.” Like Fincham, Gonzalez also plans on getting students to report on and around the debates. As the faculty co-advisor for the weekly student-run newscast Hofstra Today, he’s sending his students to fan out over campus the day of the debate to capture interviews and b-roll of the activity.

Many more students will take part working as student reporters or working alongside professional organizations. In all, approximately 100 students received credentials as student journalists or volunteers for the media on campus, according to Colin Sullivan, the director of communications for the Division of Student Affairs. Even without official media credentials, students are informally partnering with media outlets. The social media team at Newsday, for example, plans to aggregate student social media accounts, retweeting student-driven stories on and around the debate.

Planning for the Unexpected

Gonzalez covered the previous two Presidential debates at Hofstra, so he has somewhat of an idea of what to expect. “The campus will be an area full of activity,” he said. “Part of the excitement is that we don’t know what’s going to happen. You could plan all day, but you really don’t know until that day.” He’s urging his students to trust in what they’ve learned in the classroom and to simply explore and “feel it out” for good stories. “There are so many story angles, and it’s hard for us to say, ‘this is what’s going to happen,'” he said.

He anticipates that along with the national and international media, local residents will want to be on campus so they can boast about being there for the historic event, and protesters of all stripes and colors will make their presence known. He has a sense of where protesters would likely be and where security checkpoints will funnel the crowds, but constant communication and a willingness to “fly by the seat of your pants” is a core message for his students.

For her class on journalism tools, Fincham plans to have her students explore the brave new world of live video streaming via Twitter’s Periscope. For my part, I’m encouraging the use of another alternative, Facebook Live. We see both tools as a natural fit to provide coverage for what Fincham calls “millennials on the street.” Students will broadcast their raw, unfiltered and unedited interviews with fellow students on social media, revealing their in-the-moment thoughts, opinions and emotions on what will be a remarkable day for them. The mobile reporting will hopefully yield some surprising moments and, more importantly, give students a chance to discover what works and doesn’t work with mobile live video streaming.

Other faculty intend to use social media and crowdsourcing tools to take advantage of the excitement and more engaged student body. Professor Peter Goodman is coordinating Google-powered polls to take the temperature of student opinions, and to measure any substantial shift after each debate. Several professors are requiring not only live tweeting of the debate, but also specific tweets that incorporate likely participants on campus on the day of the debate — students, professors, protesters and supporters. The “Twitter scavenger hunt,” adapted from fellow educators Carrie Brown, Mindy McAdams and Cindy Royal, forces students to be on the lookout for a variety of voices to include in addition to broadcasting their own.

The live video feeds and other social media reporting will be shared and organized with the official hashtag #hofdebate16 across classes to contribute to the ongoing conversation about the debate, on and off campus.

Reporting on the Reporters

With so much critical attention paid to the performance of the media and on debate moderators this campaign, it was important for Fincham to also have students evaluate the media itself. Her special topics class on the presidential debate aims to keep tabs on what the national campaign reporters are (and aren’t) saying on Twitter in the days leading up to the debate and on the night of the debate. Fincham leans on two commercial subscription services to help her students gather and analyze the social media output. Cision, a public relations software company, will identify and build a reputable list of political reporters in all outlets, and DiscoverText, a text analytics company, will help track the Twitter accounts and gather one week’s worth of tweets. The analyses have the potential to reveal patterns in how, or if, the reporters do live fact-checking, how they engage on Twitter, and how and if they share their own opinions.

Whether or not the debate at Hofstra changes the dynamics or course of the Presidential race remain to be seen, but for the journalism students and faculty, the debate and anticipated media feeding frenzy constitute a unique occasion to learn to report with new tools and learn from the media environment itself.