The Power of Empathy, Personal Narrative and More Lessons from the Story Movements Conference 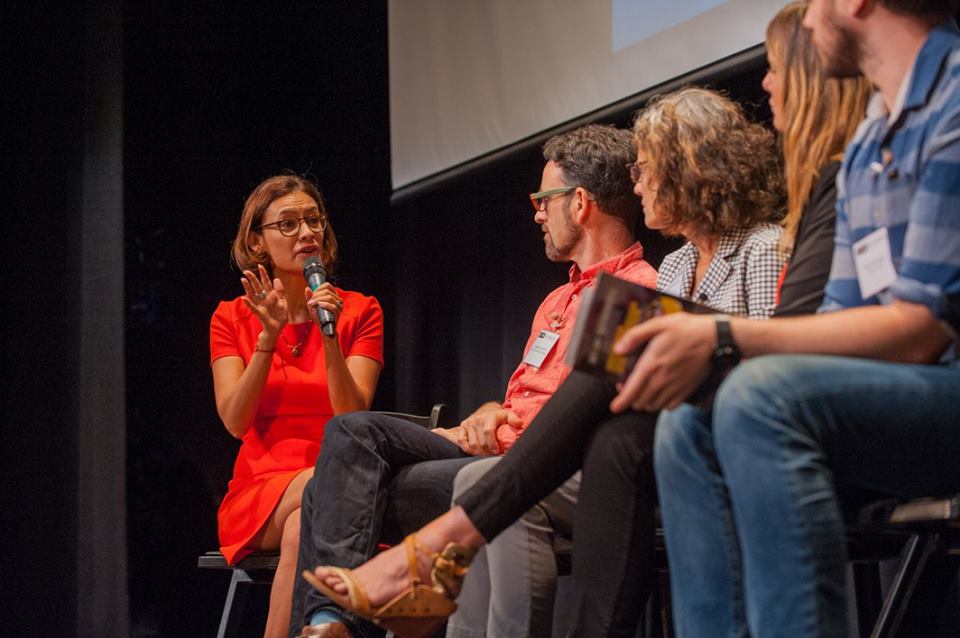 Maria Teresa Kumar speaks during a conversation at the Story Movements conference. Photo by Max Taylor.

They stood on a bright stage in a darkened room and delivered pithy presentations right out of the TED Talks playbook.

“We are in the middle of this profound movement of social justice protest and grassroots movement building,” said Caty Borum Chattoo, co-director of the Center for Media & Social Impact and executive in residence at AU’s School of Communication. “We are having these really overt conversations about racial justice and so many other issues that have to do with the portrayal of ‘the other’ or dominant narratives getting in the way of any kind of social progress. So we wanted to take a sharper focus on the social justice issues that are the most profound at the moment and bring together media makers who in the last couple of years have made impactful media projects.”

The inaugural Story Movements conference, held late last week in Washington D.C., was an expanded re-launch of the annual Media That Matters conference, spearheaded by Center for Media & Social Impact founder Patricia Aufderheide. When Chattoo and Brigid Maher, an associate professor of film and media arts at AU, became co-directors of the center last year, they decided to keep the event’s longstanding focus on media innovation and social impact, and remake it to reflect their interest in social justice.

After six hours of case study presentations, and four hours of group brainstorming and story pitches, here are three takeaways from the conference.

In her opening remarks at the conference, Chattoo signaled the importance of empathy, which she described as “what happens when we are deeply transported into a story and connect with humans rather than othering them.”

During a TED Talk-style session organized around the theme of empathy, the creators of the virtual reality experience Injustice explained how they sought to increase empathy toward victims of racial profiling by putting users in the place of a bystander who “witnesses police brutality in action” and is forced to make ethical decisions on the fly. The co-creator of another immersive experience, a text-based online game called SPENT, presented evidence that users often emerge with greater empathy for people living in poverty after adopting the identity of a recently unemployed worker who must survive 30 days on $1,000 by making in-game choices about whether to put off paying bills, ask family and friends for money, and send a sick child to school.

Even during sessions not directly addressing empathy – such as those about changing dominant narratives, exposing injustice and empowering community – speakers frequently referenced the importance of connecting emotionally with their audiences. Two separate filmmakers, for instance, said that one of the ways they evaluate the success of their projects is whether viewers develop compassion for their films’ subjects – transgender and gender nonconforming youth, and people released from prison.

Empathy was also an overarching theme during the day-two exercise in which participants were placed in groups, assigned a social justice topic and issue brief, and given several hours to build a narrative and determine the appropriate storytelling platform. Groups pitched ideas such as a virtual reality experience that puts the user in the day of the life of a transgender person, a game modeled off The Sims in which users control a city budget and learn about the high costs of mass incarceration, and a game in which people assume the role of both police and civilians facing tense, racially-charged scenarios.

“The theme that cuts through all of this is empathy,” Chattoo said. “Empathy is not only a known factor in driving people to change their perspectives and attitudes, but all of this about changing the dominant narrative is ‘please, see me as a human. And if you see me as a human it would be very hard to hate me, discriminate against me, not care if I go to jail for the rest of my life.’ ”

One effective way to build empathy is through the use of personal narratives. Jenny Nicholson, co-creator of the game SPENT, said the projects showcased on day one of the conference and the ideas generated during day two share a common a storytelling device.

“The reason these all were powerful is that they were telling individual stories,” Nicholson said. “The reason SPENT works is that it takes you down to the perspective of one person facing what happens in [his or her] everyday life.”

Nicholson grew up poor and had long wondered how to help people understand what it’s like to be on the brink of homelessness. As creative director at the advertising agency McKinney, she took on as a pro-bono client the Urban Ministries of Durham, a shelter and emergency services agency in North Carolina. Her first attempt at raising awareness and money for the agency was a traditional advertising campaign. When that didn’t gain traction with viewers, she decided to pivot to the interactive game, which was released in 2011. SPENT has attracted millions of users — including secondary school and social work students assigned to play the game — and plenty of press attention.

Katie Galloway, an investigative reporter and filmmaker who spoke at the conference, said that “close-to-the-bone, in-depth narrative storytelling” from the perspective of subjects (often without narration) is an effective way to change the dominant narrative about social issues. “The Return,” a film she co-directed, follows former inmates who had expected to serve life sentences for non-violent offenses but were given a reprieve after California voters in 2012 approved Proposition 36, which amended the state’s “Three Strikes” law. Bilal Chatman, one of the subjects of the film, was featured in a segment about prisoner re-entry on “Last Week Tonight with John Oliver” and invited for a rare sit-down interview on the show. Chatman’s story has resonated not only with advocates, the news media and the general public, but also with current inmates, Galloway said.

To raise awareness about another component of criminal justice reform, lowering the rates of people entering jails, the Vera Institute of Justice created a multimedia project (first-person essays, photography, video) called “The Human Toll of Jail” that tells the stories of the people who have served jail time and individuals involved in the reform movement. Mary Crowley, the institute’s vice president for communications and public affairs, said the intention is to “show the human face behind the data.”

Chattoo bookended the conference with commentary about the importance of personal narrative. In her opening remarks, she pointed to Trayvon Martin as the story that “launched a hashtag and a movement that has profoundly changed the narrative and the conversation and the call for reform about racial justice in America” and the photo of the drowned toddler found on the shores of Turkey as the image that “galvanized the world to a refugee crisis in Syria.”

There’s No One Way to Measure Social Impact

How, exactly, do you measure social change? It’s a question that Chattoo has addressed through her research, including a 2014 report she co-authored on assessing the social impact of issues-focused documentaries. That report defined social impact as “a broad umbrella concept that can include change to individuals, groups, systems and institutions … Social impact assumes a public interest foundation — an improvement of a state of affairs around a social issue.”

Traditional social science research methods — focus groups, surveys and experiments, among others — can be used to measure social change, the report explained. Chattoo reiterated at the conference that “social impact depends on what the social issue is. There’s no one way to measure social impact. It should remain a broad area for people to define based on their projects and issues.”

Conference presenters were asked on stage — and in interviews after their sessions — how they defined and measured the impact of their projects.

Galloway, the co-director of “The Return,” said one way to measure success is immediate gratification from legislative victories. Prior to the film’s 2016 premiere on POV/PBS, she worked with advocates supporting Proposition 36 and created a short-format New York Times “Op-Doc” (short for opinion documentary) called “Three Strikes of Injustice” and a series for Mother Jones that, according to focus groups, helped increase support for reform, according to Galloway. Among the ways she will measure the success of “The Return” are whether the film helps spur job creation for recently released prisoners, and whether it leads to improved public perception of that population.

Galloway said it’s difficult to demonstrate cause-effect in these cases, and instant gratification is rare.

“I don’t think any of us who make films and believe in the kind of work that was shown [at the conference] would argue that you have to have an immediate legislative change to know that it’s really making change,” Galloway said.

Added Jonathan Skurnik, a documentary filmmaker and founder of The Youth & Gender Media Project: “I love when our films have an impact on policy, but I also love when we help change one person’s life.”

Skurnik used as an example a middle school student who, after watching his short film about gender non-binary youth, volunteered his thoughts about gender stereotypes and his own identity. That student, the teacher later told Skurnik, had not raised his hand all year.

Funders often require quantitative measures of impact — for instance, whether students are more accepting of transgender youth, and whether teachers and principals are more confident in their ability to discuss the issue in the classroom after watching him short films. “The impact I love is more qualitative,” he said.

Nicholson said she mostly relies on anecdotal feedback to determine the impact of SPENT. “We put the game out in the world and lots of people saw it, and I assume that a big chunk of people must have been moved by it,” she said. “One of the things that’s cool is seeing the online forums about the game. Even the people who aren’t moved by it bring an interesting level of complexity and energy to the discussion.”

Anecdotal feedback from policymakers and others who viewed the Vera Institute’s data visualization of jail incarceration rates across the United States is one way to track impact, Crowley said. Another important metric, she said, is news media traction — the number of local and national news outlets that analyzed the data, and the accompanying report “Incarceration’s Front Door,” and published articles and editorials on local incarceration rates.