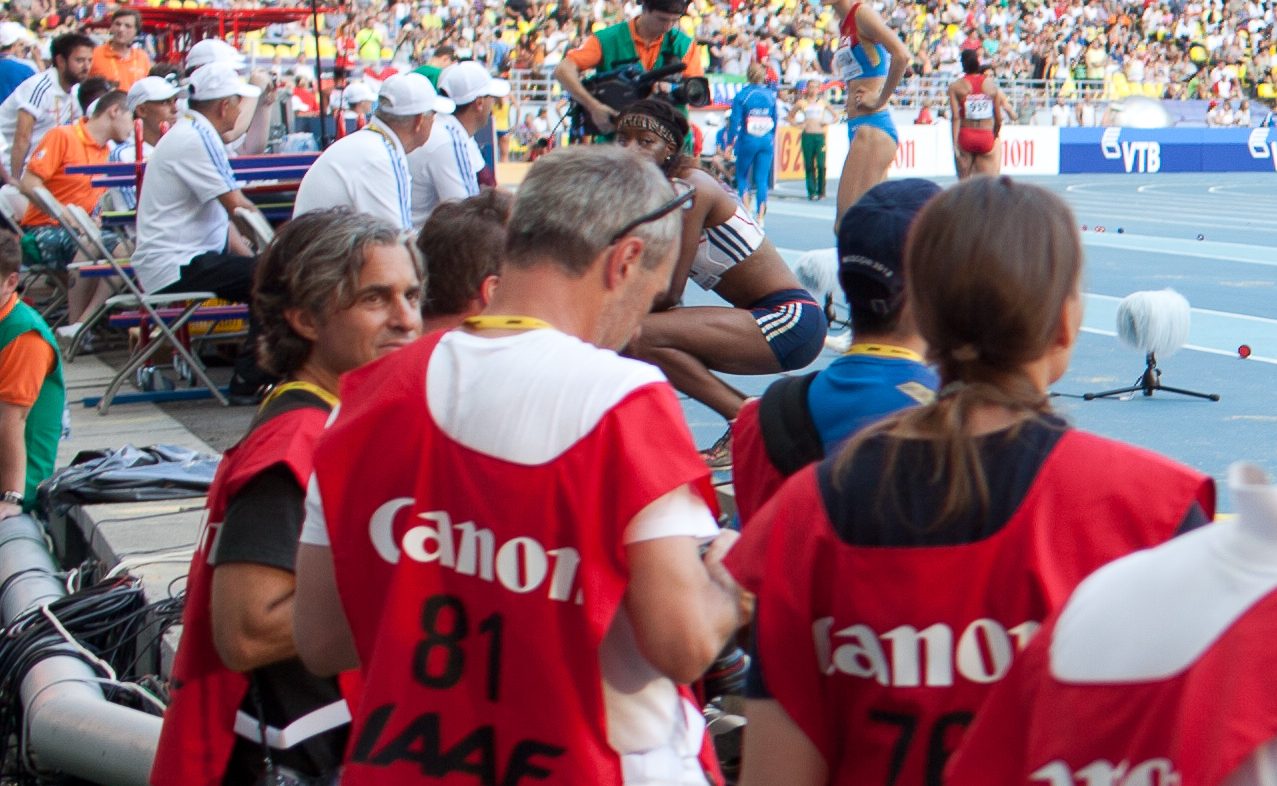 Photojournalists at the 2013 World Athletics Championships in Moscow. Photo from Wikimedia.

After weeks of discouraging, demeaning and sexist coverage from the Rio Olympics, I think that panel would be packed if it were held tomorrow. Sexist language in broadcast and written coverage from Rio has sparked a number of social media firestorms. It’s hard to know where to begin. The outrage to this headline from the Chicago Tribune was nearly instantaneous: “Corey Cogdell, wife of Bears lineman Mitch Unrein, wins bronze in Rio.”

“The Olympics is a global event where this language is visible, but it doesn’t mean it’s not visible all the time,” said Melissa Ludtke, a former sportswriter who was part of a lawsuit against Major League Baseball to allow women access to locker rooms in the late 1970s.

“We shouldn’t pretend this isn’t happening all the time.”

Motherhood has also been a big topic with Rio broadcasters. During a women’s volleyball game I was watching, one broadcaster said a player was out of shape because she had given birth within the past six months while “look at that mother of three get up!” was used to describe beach volleyball player Kerri Walsh Jennings as she delivered a killer spike during one match.

Meanwhile, sports journalism programs are growing in popularity at universities across the country. At UMass, where I teach, I founded the Sports Journalism Concentration five years ago. It’s a four-course sequence of upper-level classes that has grown to the point where those in the Concentration now represent 16 percent of the total majors in the UMass Journalism Department. Arizona State, Northwestern’s Medill School and the University of Georgia are just a handful of universities with burgeoning sports journalism programs. Yet all too often, the classes are dominated by males.

While I’ve touched upon gender and race in my classes in the past (along with writing, editing, blogging, tweeting, interviewing, etc.) — it’s clear that language and preset narratives need to become a bigger part of our classroom discussions.

Jena Janovy, a senior deputy editor for ESPN and an adjunct instructor for UMass Journalism, says diversity is on the table for discussion the entire semester during her Issues in Sports class.

“Each class brings a new chance to address how student journalists think, feel and behave when it comes to how they cover, question and portray the range of diversity in sports,” she said.

That approach is one positive step toward altering the default setting for many male sportswriters. Ludtke said the Rio coverage is part of a “tired narrative” where male athletes are portrayed as gritty and the stories on women athletes have more of a human-interest angle — if women are acknowledged at all. In one particularly egregious example, the San Jose Mercury News had to apologize after tweeting “Michael Phelps shares historic night with African-American,” in reference to the gold medal won by U.S. swimmer Simone Manuel, whose name was not even mentioned in the original headline.

We apologize for an insensitive headline earlier on a story about Simone Manuel and Michael Phelps’ medal wins. https://t.co/ykWvcddaKf

Getting more college students out covering women’s sports may be one way to bust up the “tired narrative.” Marie Hardin, the dean of the College of Communications at Penn State University, said viewers shouldn’t be surprised by sexist coverage since many commentators and reporters have little experience in covering women’s sports before being parachuted into the Olympics.

“It’s like asking an athlete to perform well when she hasn’t been out on the field for months,” Hardin said.

“This coverage ought to be expected when we realize that women’s sports get such little exposure outside of the Olympics. Then we drop reporters into an intense, high-level, two-week event involving female athletes and expect them to cover these athletes appropriately? They aren’t practiced or socialized.”

Tracy Everbach, an associate professor of journalism at the University of North Texas, points out that women are vastly outnumbered on sports desks, which in turn influences coverage. The numbers are startling. In 2014, women made up only 12 percent of sports columnists and 8.5 percent of sports editors.

“It’s not that white males can’t be fair; it’s that many are entrenched in the way they have been trained and socialized,” Everbach said. “That renders women as second-class in newsrooms and considers them to be less capable as athletes.

“There’s still a stigma to covering women’s sports, which are looked upon as much less prestigious than covering any of the big four sports (NFL, NBA, MLB and NHL) or even college men’s sports.”

Hard to argue with that. The NFL is a multibillion dollar industry and covering the NFL and college football is the prized beat from ESPN down to the local newspaper. And many sportswriters and editors will argue that a story about a bronze medal in trap shooting would never merit a story from the Chicago Tribune without a Bears tie-in.

So what can we as educators do to move student journalists away from sexist coverage? It’s a question I asked journalists and educators and while this list is by no means comprehensive, it’s a strong start: