Teachapalooza: Data Journalism Leads to Stories Behind the Action 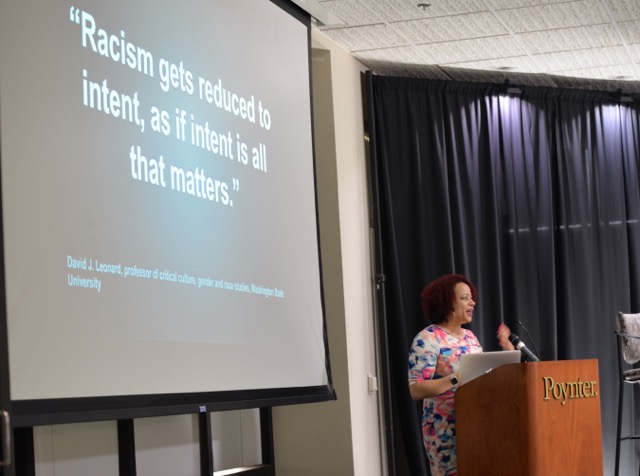 Photo by Al Tompkins of the Poynter Institute.

It’s an old cliché, but when it comes to today’s journalism, which is driven by data that tells a story on its own, journalists need to go beyond tired formulas and get right to indisputable facts.

“Anecdotes are very good, and they’re necessary, but there’s this thing behind the story that just shuts the door on any doubt." — Derek Willis, ProPublica

That was one theme of last week’s Teachapalooza, the Poynter Institute’s annual gathering for journalism educators to renew, refresh and energize their teaching.

“I don’t have time for he said/she said bullshit,” said Adam Playford of the Tampa Bay Times, who worked on the paper’s Pulitzer Prize-winning series “Failure Factories” about failing local schools. “The stories I read decisively tell me things about the world.”  The series relied largely on data and records to make the case that resegregation of the district’s schools had led to the worst outcomes in the state.

Nikole Hannah-Jones, who writes about race and education for The New York Times Magazine, pointed to the Tampa Bay Times series as an example of where officials’ actions show their intent — and journalists need to recognize that to take on difficult issues in their reporting.

“I can show through the actions, through the votes you took, through the policy decisions you made, that you knew you were going to harm people,” she said in her keynote address. The school officials said, “We care for the kids, they’re poor … but when you look at the actions they took, [their intent] was clear.”

Smart use of data allows journalists to analyze behavior, said ProPublica’s Derek Willis. Looking at arrests made by a sheriff’s department over time speaks to that agency’s priorities, he said.

“Anecdotes are very good, and they’re necessary, but there’s this thing behind the story that just shuts the door on any doubt,” he said of data.

Being able to tell stories through this frame requires a healthy dose of skepticism. Even photographs, which allow an audience to see things for itself, often can be used to misrepresent situations, said Mark Johnson, of the University of Georgia’s Grady College of Journalism and Mass Communication. He teaches his students to mix a natural skepticism with analysis of information available. Photographs today include metadata — location information or time stamps, for example — that can help settle any doubt about whether what you’re seeing is real.

Pushing this idea to the next level could mean transporting an audience to see an event for itself — in virtual reality. (Would the situation at St. Petersburg’s Melrose Elementary been even more stark if we’d seen it in VR?) Kevin Hohl and Sean Casey of Tampa’s HD Interactive introduced the medium of the moment, which allows an audience to be taken on a journey somewhere and turns the viewing of video from a passive experience into an active one. When you become immersed in the story, “you have empathy in a way you didn’t have before,” Hohl said. “You feel like you were there in a way you really never were before.”

We’ll have to wait until next year to see if his prediction that half of the Teachapalooza attendees come with VR devices packed in their bags.

The University of Maryland’s Bethany Swain explains how she uses the social media platform Snapchat to teach video journalism. Photo by Al Tompkins of the Poynter Institute.

Nearly three quarters of Snapchat users may be millennials, but don’t let that scare you away. In fact, the University of Maryland’s Bethany Swain said Snapchat has given her a new way of teaching video sequencing on a platform her students understand. What’s more, the storytelling potential in Snapchat comes from the power of visuals. “We think in pictures, we don’t think in words,” she said. Go ahead, experiment!

During Al Tompkins’ session on jaw-droppingly cool online tools, Google Translate got the most “Oooh!”s from the educator audience. It’s a tool that does live language translation. Record someone speaking in a different language, and the app translates it for you — and will translate your response back. Wave your phone in front of a road sign in a different language, and it translates it on the spot. “Get out!” said the University of Wisconsin-Madison’s Katy Culver (also the curator of the EdShift section at MediaShift). Other tools to check out: Juxtapose, SoundCite, Vont, VoiceBase, PicFlow, Politwoops and ThingLink.

The Teachapalooza audience was intrigued by the “tiny docs” concept introduced by Kansas State University’s Sara Quinn — that was her term for those short, eye-catching videos that mix visuals with text. They’re perfect for sharing and engaging audiences on social media — platforms students should think about using for creating original content, not just promoting more traditional kinds of stories. Debbie Rhyne Blankenship of Mercer University wrote to me on Facebook that original social media content might be the right way for students — whose copy isn’t always up to professional standards — to contribute to partnerships with newsrooms.

When you’re creating social media content and producing videos, keep it short and visual — making sure to include text of what’s being said. Swain said increased Snapchat use means audiences are used to faster-paced content, and producers now have an instant to capture someone’s attention before they tap past to the next thing waiting. What’s more, 85 percent of video is consumed with the sound off, according to Quinn, and text and graphics on screen are key to engaging an audience that might be watching while walking to class or riding a bus.

Educators need to embrace innovation — just like we ask our students to do, Culver said. “This is a shared enterprise,” she said. Also consider putting them in groups to give them more room to experiment and learn team-based (read: real-world) collaboration skills.

While we walk away from Teachapalooza with a batch of ideas for using new technology (see Al’s cool tools above), we can’t lose sight of teaching students how to sort through information and show audiences what’s most important. That includes helping them work through big issues facing journalists today, such as engaging our audiences and the importance of data journalism, Laura Beth Daws of Kennesaw State University wrote to me on Facebook. “Really our bigger responsibility is to teach them the concepts they need to survive regardless of technology: balancing getting the news out quickly with getting it right,” she said.

For more about Teachapalooza, check out this Storify of the weekend: